“His world, on the eve of a great and terrible war, is dreamlike.” 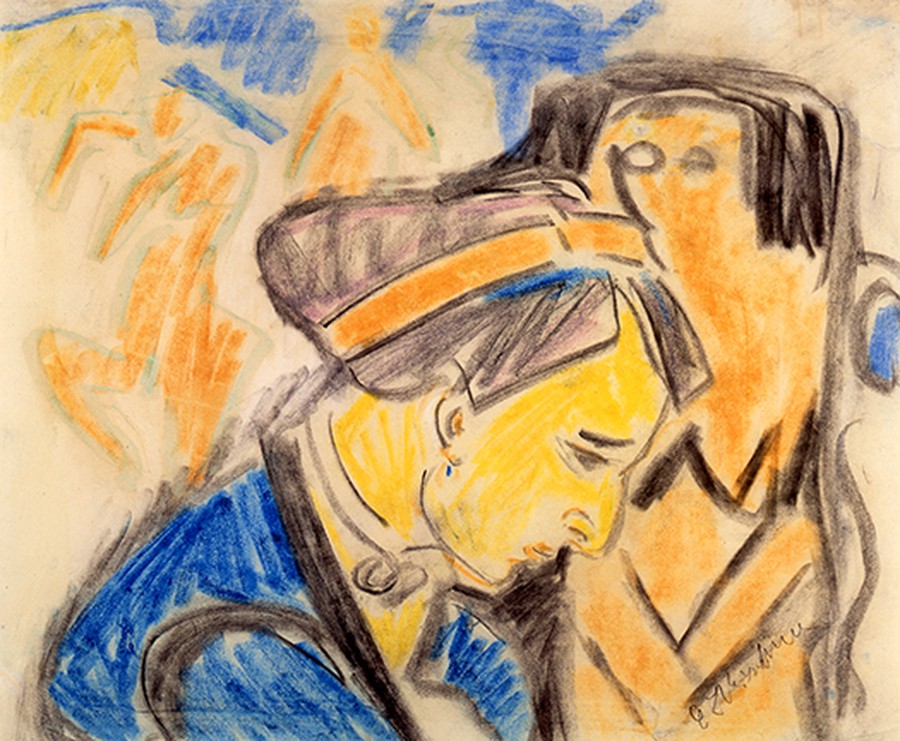 Within a compact, square gallery of no more than 100 by 100 feet, Smart Museum Curator Richard A. Born has managed to orchestrate an exhibition spanning a century of turmoil, half of a continent, and an entire movement of art.

Clearly, Expressionist Impulses: German and Central European Art, 1890–1990, now on view at the Smart, is no small feat. The exhibition encompasses an ambitious scope of work in its drive to trace the origins and progression of the Expressionist movement. Featuring works by artists from Germany, Czechoslovakia, Poland, Romania, and more, the exhibit is arranged chronologically in a fluid tour of five sectional rooms, each dedicated to a particular era and narrated by quotes taken from contemporary theorists.

“For me,” Born said in a phone interview, “walking through is a memory maze. Each room could be viewed as a separate exhibition, but I like framing them this way because each one looks to the past and the future.”

The section entitled “Around 1900: The Academy/Symbolism” introduces the viewer to the idea of Expressionism—a movement that rejected Impressionistic depictions of everyday life and, instead, endeavored to convey the raw essence of an idea or emotion. This theory lent itself to the use of representational language as well as more abstract works highlighting color and line, though Expressionism was united solely in theory rather than artistic style.

“I wanted to play off of different definitions of Expressionism and make you wonder why this artist is included in this group,” Born said.

In the adjoining section, Otto Gutfreud’s Job, a smaller-scale bronze sculpture, provides a welcome example of an evolved Kneeling Youth. Gutfreud’s form is more abstract than Minne’s, and the figure of Job appears to be at once consumed by and composed of his convulsive bronze foundation. Born’s structuring of this exhibition is indeed effective, and viewers constantly finds themselves comparing and contrasting nearby works.

This second section, “Before the Great War,” features works by Ernst Ludwig Kirchner, Max Dungert, and Wassily Kandinsky. These pieces highlight the importance of a somewhat unexpected trend of international appropriation—particularly from African, Asian, and South Sea cultures—as well as French Fauvist and pointillist influences. The works range from figurative to non-figurative yet all evoke a certain spiritual, longing quality, as seen in Albert Bloch’s painting Night II (1914). Bloch balances the simultaneously nonfigurative-figurative realm by depicting faint human outlines marching across a backdrop of simplified cosmological forms. His world, on the eve of a great and terrible war, is dreamlike.

Although the exhibition at times appears haphazardly curated, the themes of loss and struggle run strong throughout. Käthe Kollwitz’s The Widow, a crayon drawing on wove paper, features a hauntingly expressionless woman with her hands outstretched in both longing and prayer. Emil Nolde’s painting Two Girls (1929) poses an interesting example of struggle in itself, for this bestial depiction of two twin-like figures was confiscated by the Nazis and deaccessioned as “degenerate.”

As you move through the following sections, “Between the Wars,” “1930s-1950s,” and “After Yalta” you become a voyeur into the life of exile. Yet the world’s slow dive into war, tension, and depression spurred varied artistic responses even within the movement of Expressionism. While some artists turned to more subjective, expressionistic takes on landscape, others explicitly addressed their political reality: Felix Nussbaum’s Carnival Group (1939) elucidates his experience as an exiled German Jew. The painting features a menacing crowd clad in gaudy hats all set before a withering landscape. The scene is repellant and exudes a combination of alienation and frustration. Like Nussbaum, Jorg Immendorff expresses his lived experience in a divided Germany with his massive oil painting No Light for Whom? (1981)—a work saved for the exhibition’s finale.

Although Expressionist Impulses—all 80 pieces of it—is extensive, it is by no means comprehensive. Rather, this broad collection of paintings, drawings, and sculptures takes you on a tour of the late 19th and early 20th centuries, forcing you to question, compare, and eventually develop your own definition of Expressionism.

“Maybe the 100-year period is a bit overwhelming,” Born admitted with a laugh. “but I don’t think anyone has ever framed it quite like this before.”

Expressionist Impulses will be on view through January and is running in concert with two other Smart Museum exhibitions: To See in Black and White: German and Central European Photography, 1920s–1950s and Expressionist, New Objectivity, and Constructivist Prints, 1905–1925: Recent Acquisitions.