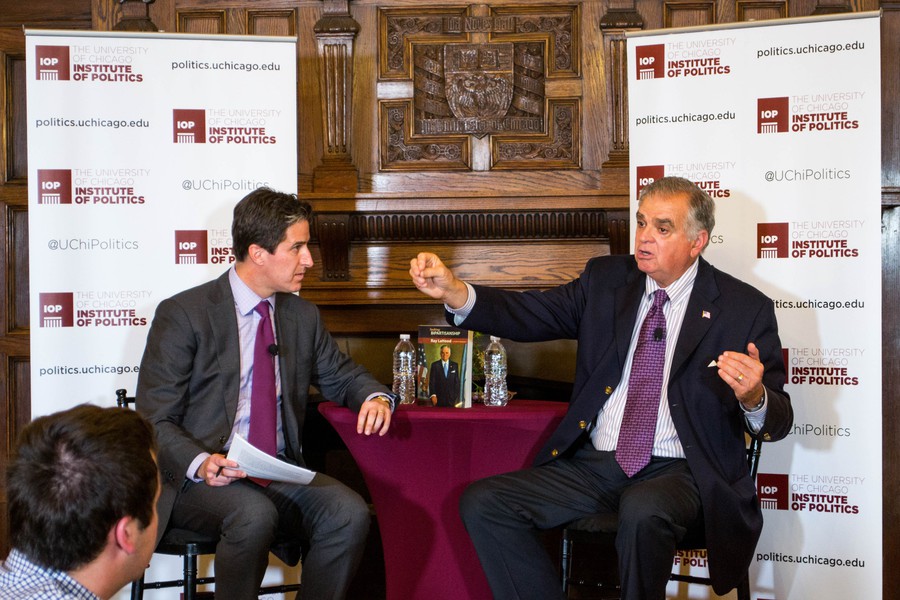 Last Thursday, Ray LaHood, one of the three Republican appointees to the Obama cabinet, gave a talk at Ida Noyes Hall as part of the Institute of Politics (IOP) “Road to 2016” speaker series. He covered issues ranging from Donald Trump’s presidential bid to the 1994 Congressional election, with a unifying theme of bipartisanship.

LaHood reflected on his time in office as a congressional staffer, Congressman, and Secretary of Transportation, and how, as a Republican, he observed and sought bipartisanship in the federal government. He lamented the current state of American politics.

“The way that politics works today is this idea of, ‘What’s the worst thing you can say about somebody and get away with it?’ Just about anything.”

He rested some responsibility for ultra-partisanship on the shoulders of former Speaker of the House Newt Gingrich. According to LaHood, Gingrich turned local congressional races into national affairs in 1994 with the Contract with America, a legislative plan for prospective Republican Congressmen that LaHood and only two other Republicans elected that year refused to sign. LaHood saw this as the start of divisive national politics.

In response to an audience question, LaHood encouraged students to take part in politics and civil service.

“If [students] don’t get involved in politics, then they’re missing an opportunity to serve their community...[and] move the country forward.”

This message resonated with some students. Third-year Michael Vasiliou said he respects LaHood.

“He demonstrates a certain amount of kindness and friendliness in politics that really no one else has, so it was nice to [have] a refreshing break from the constant name-calling and cat fighting in Congress.”

Trenton Crawford, a first-year who lived in LaHood’s Congressional district, took particular note of some of LaHood’s comments.

“What I found really surprising was that he really does not like the impact that money has in politics and also how the Tea Party has split the Republican Party.”

During his talk, LaHood also decried the Tea Party’s role in politics.

“This is the crowd that shut down the government and bragged about it…They want to tip the place upside-down…Their purpose is not to make progress, not to make change, but just to be obstructionists.”

LaHood also gave his thoughts on the upcoming presidential election. He commented on Donald Trump’s role in the election, arguing that Trump’s appeal as an outsider is misplaced and pointing out Trump’s limited support.

“[Trump] is not going to be President. He’s offended everybody in America…He’s reached his high-level mark,” LaHood said. “The American people almost always get it right.”