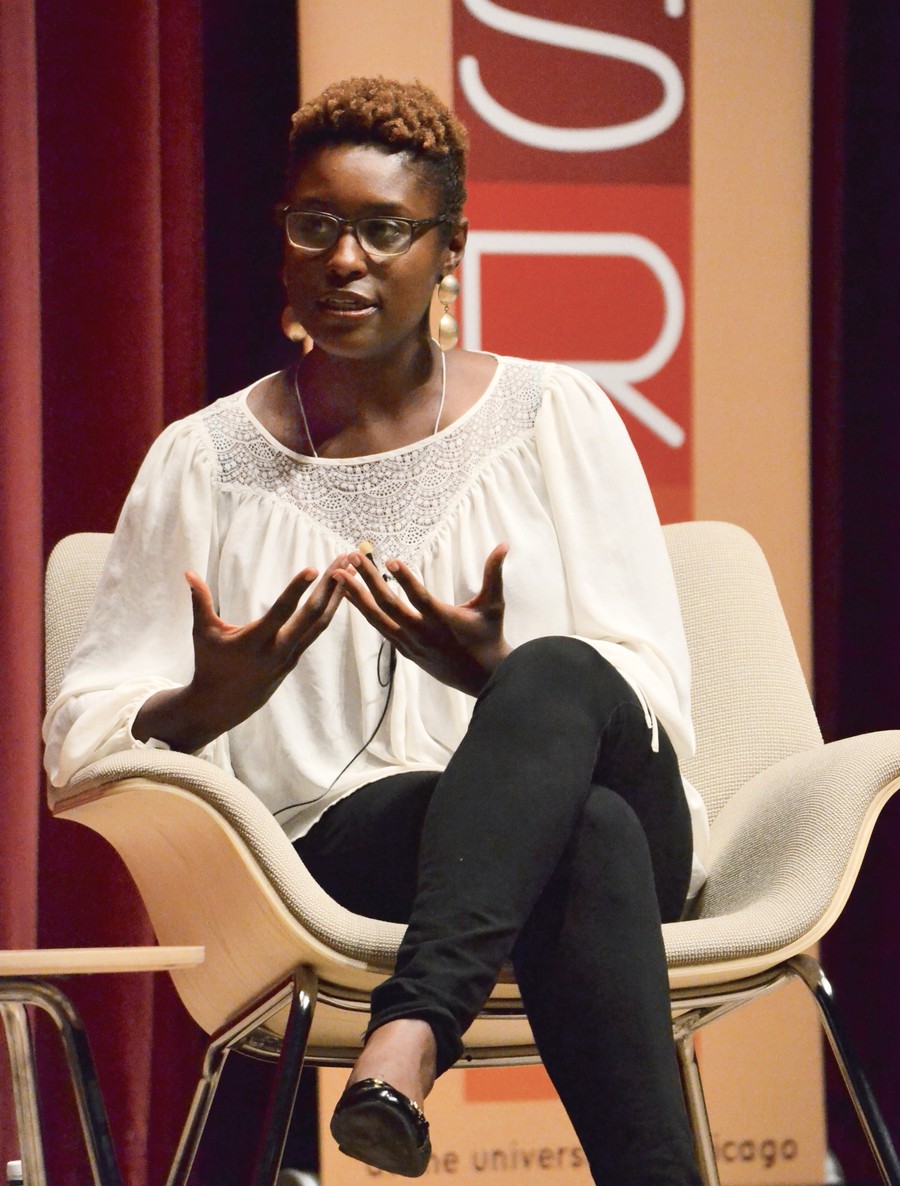 Writer, actress and producer Issa Rae at a discussion with students.

“I’m awkward and black. Someone once told me those were the two worst things anyone can be. That someone was right.” –Misadventures of Awkward Black Girl

Issa Rae’s Misadventures of Awkward Black Girl propelled her into YouTube stardom. Her character, J, was a sharp departure from the usual roles that actors of color are relegated to in popular film and television. Rae writes with an acute awareness of the often-overlooked, multifaceted experience of what it’s like to be black, female, and, in this case, awkward.

It is no surprise, then, that her visit to the University of Chicago drew a crowd as diverse as her audience. Her evening discussion in Mandel Hall attracted an audience that was a sea of varying shades of brown, and each face was enthralled by Rae’s thoughtful yet humorous insights into her childhood, Stanford education, and creative process.

She elaborated on her childhood: moving from Los Angeles to Senegal and back to the United States. Rae eventually found herself in a predominantly Black and Latino middle school, one in which her black wasn’t deemed to be “black enough.” She found herself performing a brand of blackness that wasn’t really her up until she reached high school.

Then, she said, it hit her—the need to sit back, observe, and be herself. She carried that same sentiment into Stanford University, where she created her first mockumentary video series Dorm Diaries, a comedic look at what it’s like to be a student of color at an elite academic institution.

Since Dorm Diaries and Misadventures of Awkward Black Girl, Rae’s career has spiraled upwards. She wrote a book—also titled Misadventures of Awkward Black Girl—and two years ago she signed a contract with HBO. Rae is now working on a show for HBO titled Insecure with the actor and writer Larry Wilmore, whose resume includes such titles as In Living Color, The Fresh Prince of Bel-Air, and The Jamie Foxx Show.

For 30, Rae’s accomplishments are impressive, especially considering that her ascent to Hollywood fame was not an easy one. At lunch with a group of students interested in entertainment, Rae explained that networks’ initial reaction to Misadventures of Awkward Black Girl was their desire to adapt it into something “less black.” One network proposed that an actress with lighter skin and straight hair play the lead instead of Rae—ignoring and undermining the entire point of the series. The effect that had on Rae was to strengthen her belief in the necessity of “real,” non-stereotypical black characters.

Recently, Rae did a cover for Essence magazine with Shonda Rhimes, Ava DuVernay, Debbie Allen, and Mara Brock Akil. They are four of the leading black women in the entertainment industry, an industry which suffers from the lack of both women and people of color. In a conversation following the photo shoot, Rae complained to her cover stars about how hard it was for her to maintain artistic control when dealing with television networks. In response, “these badass bitches” told Rae to just put her foot down and insist on her artistic decisions.

During the evening discussion and subsequent Q&A, Rae emphasized time and time again that she writes from her own experience and refuses to compromise her artistic integrity. She’s filling a gap in TV writing where characters of color are the sidekicks, butts of jokes, or simply comedic relief. Rae left Mandel Hall having inspired the need not to be like her, but instead be uncompromisingly and unapologetically you.