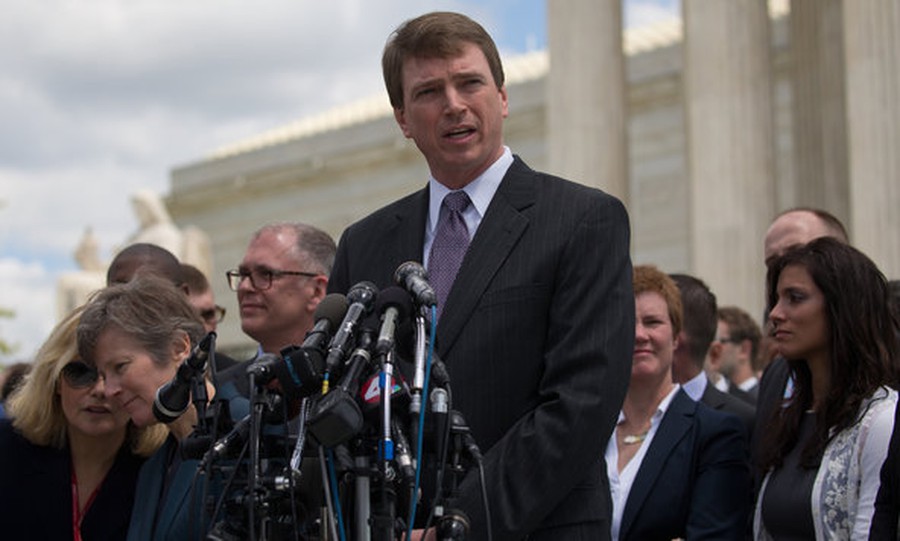 Courtesy of The New York Times

One of the two attorneys who successfully argued that state bans on same-sex marriages were unconstitutional in Obergefell v. Hodges spoke at the Law School on Wednesday.

The plaintiffs were concerned the Court would issue a partial victory, ruling “yes” on Question 1, but “no” on Question 2.

Hallward-Driemeier said his goal was to reinforce Mary Bonauto’s Question 1 argument while he argued Question 2.

“One of the real hopes of [my] preparation was making sure the second issue did not become an off-ramp,” he said.

Hallward-Driemeier said he tried to convince the Supreme Court that ruling “no” on Question 1 and “yes” on Question 2 would establish same-sex marriages as second-class marriages, which would have some constitutional protection but not the same level of protection as heterosexual marriages. The Supreme Court decided in favor of the plaintiffs on both questions.

“The Court hasn’t recognized a new classification as suspect in many many years, and some question whether it will ever recognize another,” he said.

“I do think that the pieces are there for lower courts, and maybe for the Supreme Court, eventually, to find that [sexual orientation] is a suspect classification,” he said.

Much of Hallward-Driemeier’s talk was a sophisticated discussion of the case’s legal arguments. However, when arguing that laws against recognizing same-sex marriages discriminate on the basis of not just sexual orientation, but also sex, he provided an extremely simple example.

“Sue loves Bill and Tom loves Bill. Sue can marry Bill, Tom cannot, and it’s only because of the respective genders of Sue and Tom. Why isn’t that gender discrimination? I’m still waiting for the answer to that question,” he said.

“It’s the perfect opinion for this movement for this time,” he said.