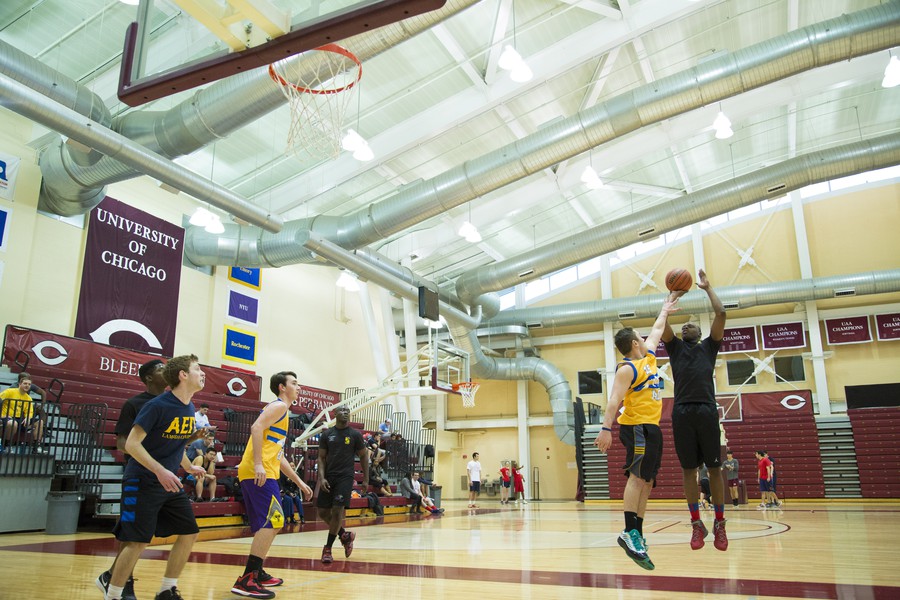 The Maroon Veterans Alliance hosted a Points for Patriots tournament last Sunday at the Ratner Athletics Center. The three-on-three charity basketball game was attended by over 150 people.

The Maroon Veterans Alliance (MVA), a new student organization, seeks to give the UChicago community a new way to show its stripes with service and support for veterans and active duty personnel. Nearly 150 people attended the first Points for Patriots tournament, a three-on-three charity basketball game organized by the organization in partnership with the Institute of Politics (IOP), held on Sunday at Ratner Athletic Center.

First-year Michael Schumer, who founded the organization, said the Points for Patriots tournament has raised around $38,000 for veterans and active military personnel since its creation in New York City in 2011. Schumer founded Points for Patriots on the 10th anniversary of 9/11 in his home in New York, and introduced the initiative to UChicago with the backing of Patrick Murphy, a fellow at the IOP last quarter and the first veteran of the Iraq War to serve in Congress.

“The Maroon Veterans Alliance grew out of my tremendous passion and respect for the military and our nation’s heroes. We have expanded it from merely a tennis tournament to biannual events, raising about $40,000 up until last year,” Schumer said.

“I figured that when I got to the University of Chicago this [past] fall as a first-year, I wanted to connect University staff and alumni with veterans as well as active duty personnel in the best way I knew how,” Schumer said. “And in that, I created the Veteran Career Advocacy Program (VCAP). VCAP gives veterans career workshops as well as educational workshops led by University alumni or career/industry leaders, as well as faculty.”

VCAP is one facet of the Maroon Veterans Alliance, in addition to the Points for Patriots tournament, which raised money for the Intrepid Fallen Heroes Fund, a national non-profit. The Fund aims to construct rehabilitation centers on different army bases around the country for soldiers with post-traumatic stress disorder (PTSD) and traumatic brain injury (TBI).

The morning of the Points for Patriots event, Schumer and the University Community Service Center organized a day of service—part of the MVA’s efforts to organize care package drives throughout the year. “We had about 10 full boxes ready to send to active duty personnel in Afghanistan, as well as 25 volunteers,” Schumer said.

Schumer said he would like to continue building upon his early achievements with the MVA. “It is my hope that we can continue to expand the program to make it a nationwide engagement of top level universities with local veterans and different organizations.”