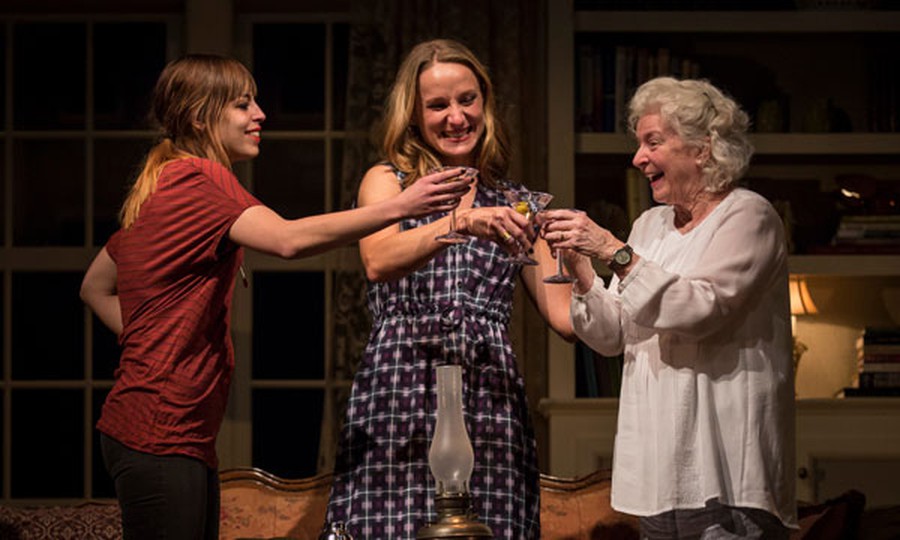 Courtesy of the Goodman Theater

Gina Gionfriddo’s Rapture, Blister, Burn, a 2013 finalist for the Pulitzer Prize in Drama, opens discontentedly and contemplating midlife morass at the Goodman Theatre’s Albert venue. Sparsely elegant sets emphasize the everyday routine that, as weeks in the doldrums of post-collegiate life bleed into decades, the narrative establishes as its primary antagonist.

The premise, not unlike a Disney plot (indeed one character makes the necessary ironic prod in self-referential fashion toward such infamously infantile tendencies rife in films catered toward a juvenile audience), is more pedantic than exciting. It is, however, not without its own certain entertainment: two 40-something former grad-school roommates who find dissatisfaction in their life paths (one, a housewife and stay-at-home mother, the other a feminist scholar touting critical success and a kind of popular, celebrity-like status) decide to swap careers, so to speak, and search for a fulfillment as-of-yet unfound in the other’s life. The centerpiece of the play is Don Harper (Mark L. Montgomery), whose wife Gwen (Karen Janes Woditsch) decides to swap places with Catherine (Jennifer Coombs), the feminist scholar on sabbatical and Harper’s old girlfriend who, since he left her back in college (for the dissatisfied stay-at-home Gwen), has stumbled through unfulfilling relationships and sought after an ever-elusive (and possibly non-existent) love.

What ensues is a sub-lecture on historical and contemporary feminist theory siphoned through the opinionated spouting of individuals spread across three generations and (it turns out, as the mouthpiece for memorable moments) masked as a plot-thread for college undergrad Avery Willard’s (Cassidy Slaughter-Mason) quirky humor and hopeful cynicism to shine. Since four of the five cast members are women grabbing and gripping at the rare air of feminist theory, Don Harper’s aimless drifting-as-flotsam between two women and through the beer-soaked eve of his middle years makes an ironic kind of sense to the play. But the aim in the course of the characters’ lives (to find [to make?] meaning, to know a certain vital fulfillment) remains ambiguously undefined and left for the audience’s own subjective and interpretive designs.

That is to say, the play is an inquisitive vehicle for generating a sense of self and place within the individual whose own trajectory is not particularly mapped in ink or at length. It is a narrative that starts out confusedly at the crossroads of platitudinous midlife malaise and modern alienation, and seeks, by its end, toward the apparition of warmth on some horizon’s equatorial region, without quite arriving at any grit or soft surface of substance.

That is, however, rather the point.  The elements of the production are each fashioned with a certain excellence. What is more, the material hangs in the air as something that is true, and engaging, and of a real kind of value. The characters themselves might float through nihilistic apparitions and never land on anything anywhere, but the audience member, at the end of it, leaves his seat feeling not as though he had lost something, or wasted it, but instead as though he had gained the jewel of an idea to contemplate in the palm of his mind.

The play will run through February 22nd in the Albert.