Justice Kagan shares her view from the bench 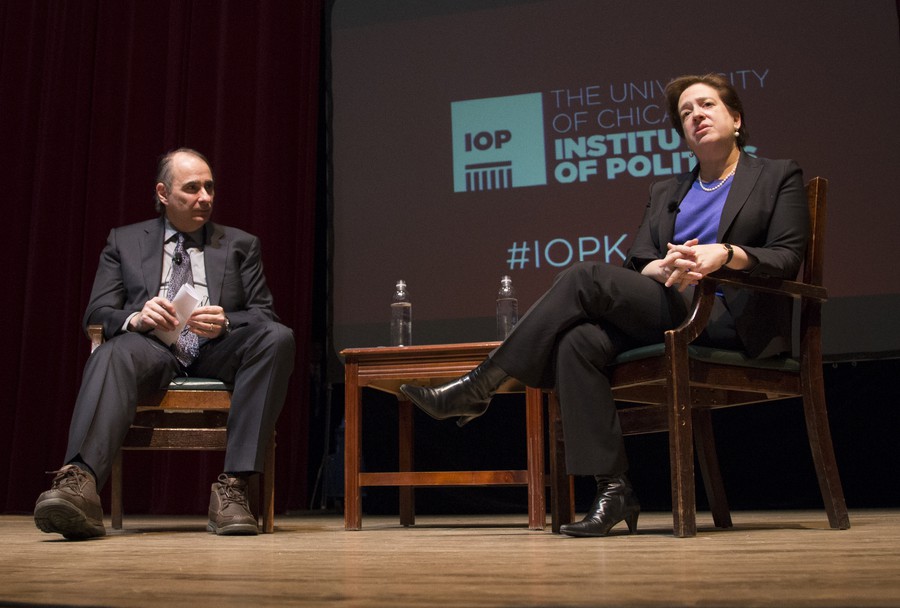 U.S. Supreme Court Justice Elena Kagan discussed topics ranging from her legal life to the inner workings of the Supreme Court in a conversation moderated by Institute of Politics Executive Director David Axelrod on Monday. Kagan was the first female solicitor general of the United States and is the fourth woman in history to serve on the Supreme Court, nominated for the position by President Barack Obama in 2010.

Despite an early interest in public service, Kagan was not always sure she wanted to be a lawyer. “I went to law school not particularly thinking I was going to end up loving law…but in fact I did,” she said. “I walked into law school and thought, ‘Gosh, I’m glad I’m here.’”

Following her clerkships, Kagan briefly practiced law at a firm in Washington, DC and then went on to teach law at the University of Chicago Law School and Harvard Law School. She highlighted the impact that her stints as a professor had upon her subsequent career.

Kagan said that as a professor she tried to find a method of communication that helped her students understand the complicated material in a memorable way. She continued to compare her work in the classroom to her work as a judge.

“When I write an opinion, or even when I think about what I’m going to say in conference with my colleagues, that’s often exactly what I try to do,” she said. “I try to put myself back in that mindset and say…‘How am I really going to persuade them that this is the right decision in this case?’ I think a lot about that preparation for teaching when I do that.”

Axelrod asked Kagan whether the lack of diversity in educational backgrounds on the Supreme Court was in any way troubling, in reference to the fact that all the judges have studied at Yale and Harvard.

“I don’t think it’s an issue for some of the reasons people think,” Kagan responded. “It doesn’t affect decision-making in very many cases…. For the most part, having a diverse court on any of those metrics [referring to gender, racial, and other forms of diversity] is not all that important for actual decision making. What it is important for, I just think it’s a good thing to have our governmental institutions be ones that people feel…as though the government institutions are connected with them in some real way.”

Describing relations between the nine Supreme Court justices, Kagan emphasized their efforts to avoid caucuses, and to listen and learn from one another.

“We are divided on some important issues, but remarkably two-thirds of the time last year we agreed 9–0,” she noted. “Now, you know, that’s unbelievable because all of these cases that we’re doing are hard cases.”

When asked her thoughts on the Constitution being a living document, Kagan responded that the intent of the framers is a factor to consider, but not the only one.

She provided the example of Brown v. Board of Education to support this position. “Brown v. Board would not have been decided by the court in the way that Brown v. Board was decided if all the court had asked was, ‘Well, back in 1868 did the framers of the 14th Amendment envision segregated schools?’” she said. “And the answer was, ‘Yes, of course they envisioned segregated schools and of course they thought the 14th Amendment actually had nothing to do with that.’”

“It’s no mystery that I’m not one of the people who people label as an ‘originalist’ on the court,” she said. “If you just look at what the framers thought, you get a set of results that I think that our society would not be willing to live with.”