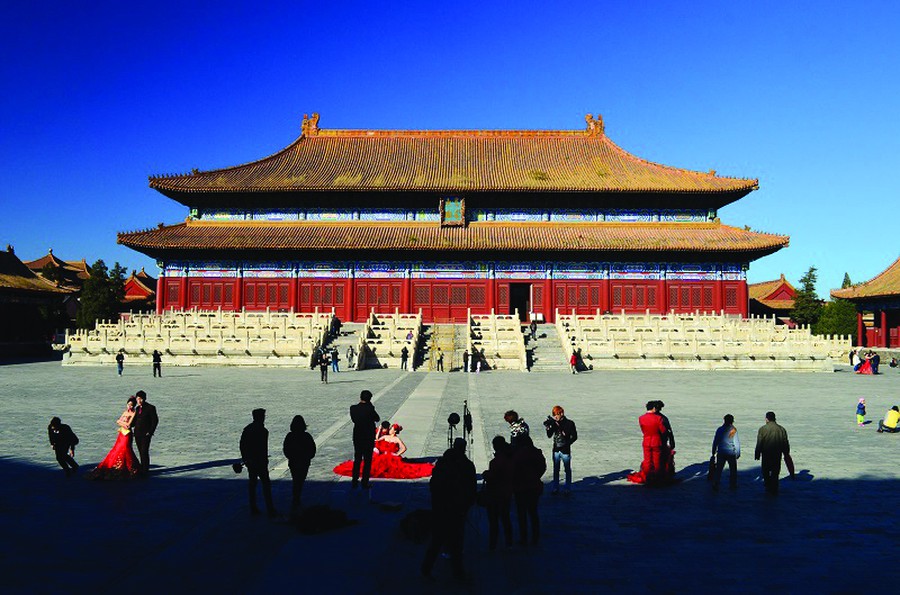 In Café Logan, surrounded by his art, Alexander Pizzirani points out his favorite photograph to me: an engagement ceremony at the Imperial Ancestral Temple in Beijing. The bride is wearing what would be considered a Western wedding dress, save for the fact that it is red, the color that the bride dons at traditional Chinese weddings. This synthesis of cultural practices encapsulates the spirit of Pizzirani’s photography exhibition, entitled The Past in the Present: Tradition and Modernity in Beijing, slated to end this Sunday.

A third-year economics major, Pizzirani discussed how his academic interests influence his photography. “I like to look at economic development and how that manifests in urban space. In the case of Beijing, I was interested in how such rapid economic change has affected traditions that once had strong staying power.” The photographs were primarily taken while Pizzirani was studying abroad in Beijing last quarter, though several were taken on his second trip to China in 2008. This was incidentally the year when he got his first heavy-duty camera.

The exhibition – presented at Café Logan as part of a new FOTA initiative – is divided into three sections. The first section represents stasis, in which traditional practices are largely left unaltered. The second demonstrates transformation, through interactions between the past and the present. The final section, exhibited on the wall opposite the main space, consists of photographs of policemen patrolling and guarding Tiananmen Square, representing a key aspect of modern Chinese history.

“In essence, this exhibition is a series of snapshots that show how these elements of society interact in Beijing,” he said. “The theme organically came together.” This attests to the rapid transformations that the city has undergone and is still undergoing. In 2005, the first time Pizzirani was in Beijing, he noted that wealth was expressed through ostentation. Today, Beijing seems to be subtler in demonstrating its rapid economic development. Pizzirani suggests that Beijing imitates what are considered to be desirable aspects of other cities, and in so doing attempts to conform to the normative standard of what a world-class city should look like.

Beyond imitation, innovation is starting to occur. “China is industrially reaching that point, with brands like Huawei,” suggests Pizzirani. “Culturally, too, this is starting to happen, with artists like Ai Weiwei operating on an international scale.” As innovation is often set alongside tradition, these tensions manifest clearly in his photography. A photograph of a man playing the yueqin, a traditional Chinese instrument, when seen alongside another photograph of greetings for the Lunar New Year written in Czech, demonstrates the importance of these conflicts in an ever-changing city.

What is powerful about Pizzirani’s work is its verisimilitude, and how it reflects landscapes in an urban space that is never static. “I don’t like staging things. I don’t like manipulating things,” Pizzirani said, as he noted the limited nature of edits and touch-ups made to his photographs. “It’s about documenting what’s in front of me in that moment.” Weaving his photographs into a narrative of transformation in a city where all is transient, Pizzirani artfully captures moments that will, perhaps, be lost through Beijing’s unending process of revision and renewal.

Pizzirani has submitted some portfolios to a couple of galleries in hopes of future exhibitions, and plans to continue widening the subject of his photography. “I usually focus on travel and wildlife, but I hope to do some portraiture,” he said.

His work has enlivened Café Logan for almost a month, and will hopefully continue to be displayed in future exhibitions. “I received my first camera in third grade, and I’ve come a long way since,” he said. Pizzirani has devoted his life to creating art, and he reflects, “Photography, to me, is simply about sharing what I see.”