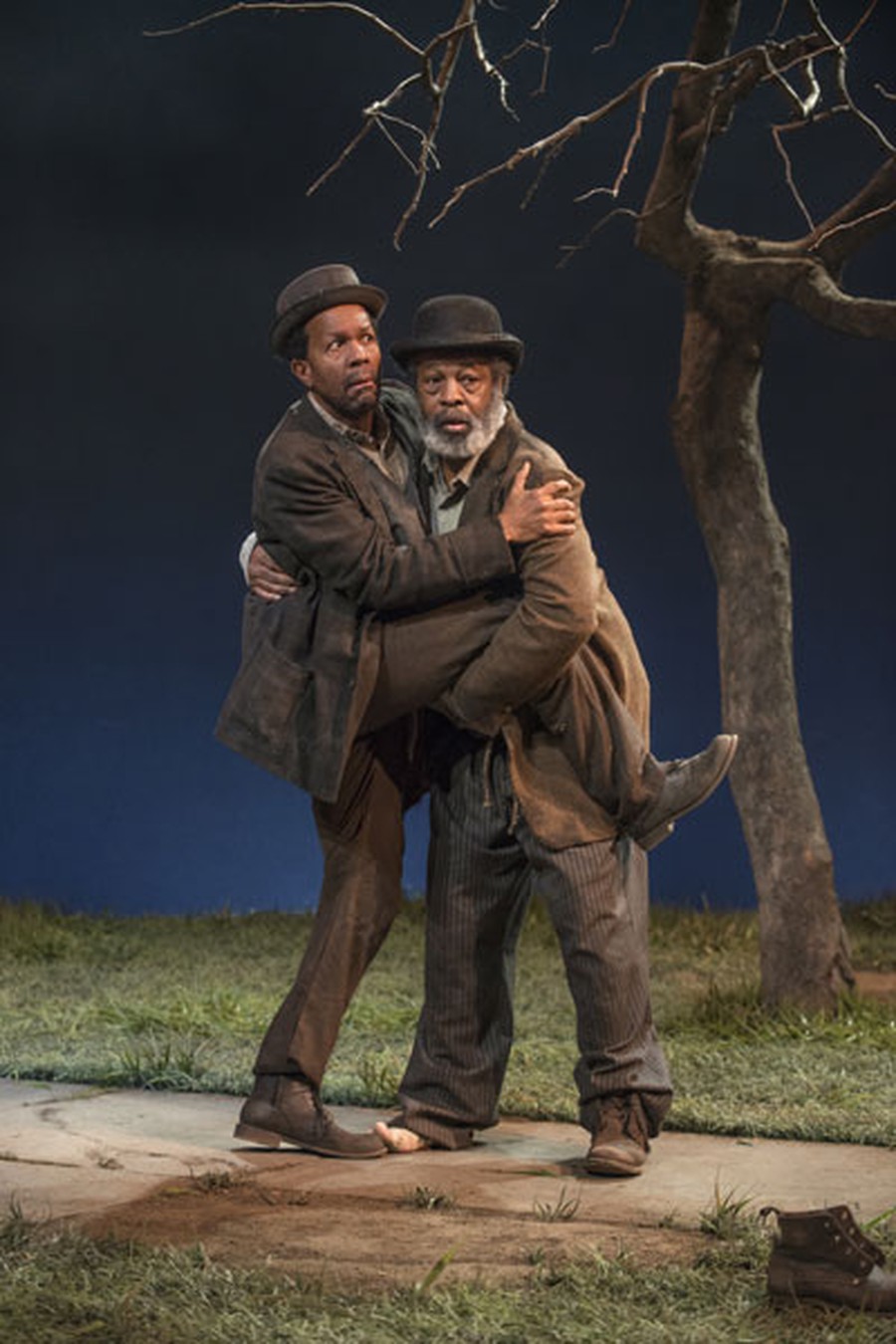 The power of Samuel Beckett’s Waiting for Godot lies, unsurprisingly, in the banal yet universal act of waiting. Main characters Vladimir and Estragon persistently await the arrival of Godot, an unknowable yet somehow palpable figure who never appears. They encounter no one on this nondescript country road, save Pozzo, the tyrannical owner of the land, and Lucky, his silent servant.

To recreate the magic of this absurdist tragicomedy is a Herculean task, since most audiences are already aware that the titular Godot never arrives. Some scenes in the second act of this production, directed by Court Theatre resident artist Ron OJ Parson, are found wanting. However, this is still a production that inspires the sense of universal distress that Beckett envisioned—especially as Vladimir (Allen Gilmore) poignantly cries, “But at this place, at this moment of time, all mankind is us, whether we like it or not.”

The moment one steps into the theatre, one is struck by Parson’s bold take on this 20th-century classic, apparent from the set that refreshingly re-interprets Beckett’s middle-of-nowhere setting as a drab sidewalk. Situating the play through the visual idiom of an urban environment—alongside having a cast comprised solely of actors of color—locates it in the context of recent events in Ferguson and elsewhere around the country, as Parson himself pointed out in a recent interview. The universality of the experience of the futility of waiting extends to all peoples at all moments in history, and this interpretation is undoubtedly a timely and thought-provoking one.

The chemistry of Estragon (Alfred Wilson) and Vladimir (Gilmore) evokes a weary narrative of their complex partnership, heightened by contrasts in the acting styles of both men. Gilmore’s Vladimir is energetic and expressive, delivering some of the most desperate lines of the play with powerful irony. Opposite Gilmore is Wilson’s Estragon, whose dispirited impatience captured the distressing futility of waiting. Unfortunately, this stark juxtaposition tends to be overwrought in several scenes of the second act. Their interaction with the boy (Oscar Vasquez) is particularly stilted and adds very little to their desperation at the fruitlessness of their endeavor. In many ways, the second act feels superfluous, as if Vladimir and Estragon are not waiting, but simply killing time—an action that has less gravity to it.

Lucky (Anthony Lee Irons), however, is consistently stellar. His reaction to Pozzo’s (A. C. Smith) violent maltreatment is appropriately unsettling, with his silent gaze and his intense physicality evoking the inescapable pain of a servant in an oppressive relationship. His delivery of his one glossolalic speech, in response to Pozzo’s order for him to think, is at once sublime and terrifying. Having broken his silence in favor of a disquieting exposition of his intellect, Irons crowns what is perhaps the most awe-inspiring moment of this production. Smith’s Pozzo, however, is a little contrived in his portrayal of an ostentatious aristocrat, and his exaggerated movements are at times unnecessarily distracting.

The light transitions in this production are exceptional in their interaction with the set and the actors on it. The faint orb of light creeping up the blank wall and the subtle use of fog artfully capture the unrelenting passage of time that is fundamental to the play’s premise of the inherent human inability to break free from the shackles of routine.

Despite some minor flaws in this production, Parson’s artistic vision of Waiting for Godot and the energy of the cast inspire both comedy and pathos. Beckett famously complained that his play was subjected to “endless misunderstanding,” yet this production has added a new dimension without significantly compromising Beckett’s original intent. For those two and a half hours, the audience shares in the relentless pain of the wait, heightened by the keen knowledge that Godot will only disappoint.

Waiting for Godot will be at the Court Theatre through February 15.