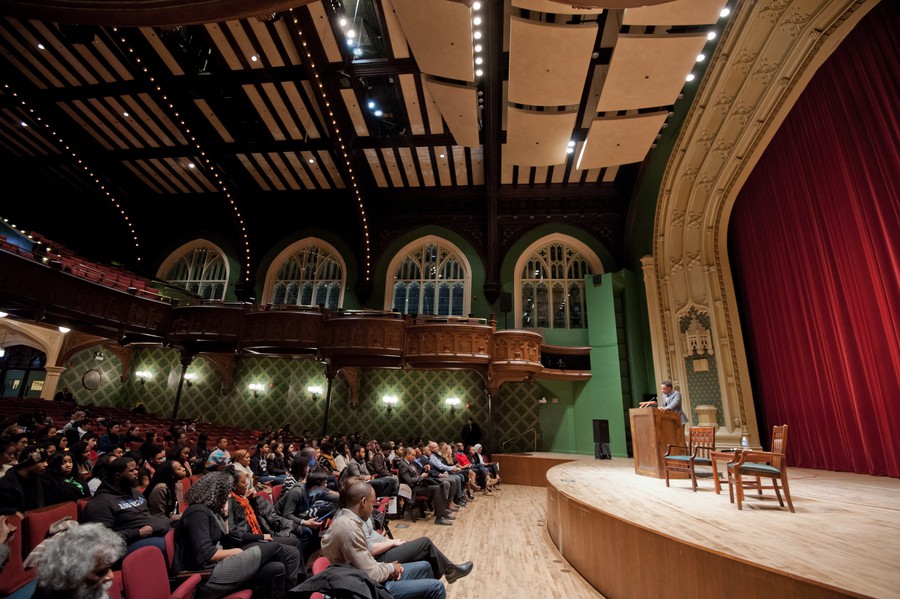 Physics, karaoke, and race relations found common ground at Thursday evening's 2015 Annual George E. Kent Lecture, “The State of Black Youth: How We Fare In A System of Brutality and Incarceration,” hosted by the Organization of Black Students. Award-winning actor and best-selling author Hill Harper discussed the prison industry, mass incarcerations, and trials faced by black youth, and then proposed solutions inspired by science.

In honor of the late Dr. George E. Kent, the first African-American professor of English at the University, the Kent Lecture was created in 1984 by the Organization of Black Students as a platform for community exposure to African-American issues in America.

Harper read a letter to open the night, which was sent to him from prison by then 16-year-old Bryan, and explained that it had a profound impact on his view of the prison system.

Harper then framed the issue from a historical context. “As slavery was the fundamental fact of 1850, in truth, there are more black men in the grip of the criminal justice system, in prison or probation or on parole, than there were slaves in 1850,” he said.

In light of data surrounding the incarceration of black youth in America, Harper stated that the nation is entering into a burgeoning new Jim Crow era.

“There is seemingly zero political will to solving these issues,” Harper said. “We can put up hashtags of #blacklivesmatter, but if there's no political force behind that, then do they really [do anything]?”

Discussing the prison industry, Harper stated that underserved populations are placed in prison because of market incentives. “There is a system of profit making that is so egregious in our penal system,” he said. “People are getting rich off of phone calls from prison….You can go and buy stock, betting on a prison arresting more poor people. The incentives these companies have are to fill their beds.”

The night took a humorous twist when Harper began his discussion on potential solutions, drawing parallels to physical principles.

“Physics tells us that energy cannot be created nor destroyed. It already exists!” Harper said. Stating that system issues start by affecting those at the molecular and individual level, Harper encouraged individuals not to underestimate the impact of bringing awareness of such issues to their peers. “It could be one person; you don't have to write the book yet. You don't have to create the non-profit,” he said. Harper closed by proposing that community-derived police forces could result in a more positive law enforcement and community dynamics.