A gap year spent in 1450: finding passions and restoring frescoes in Italy 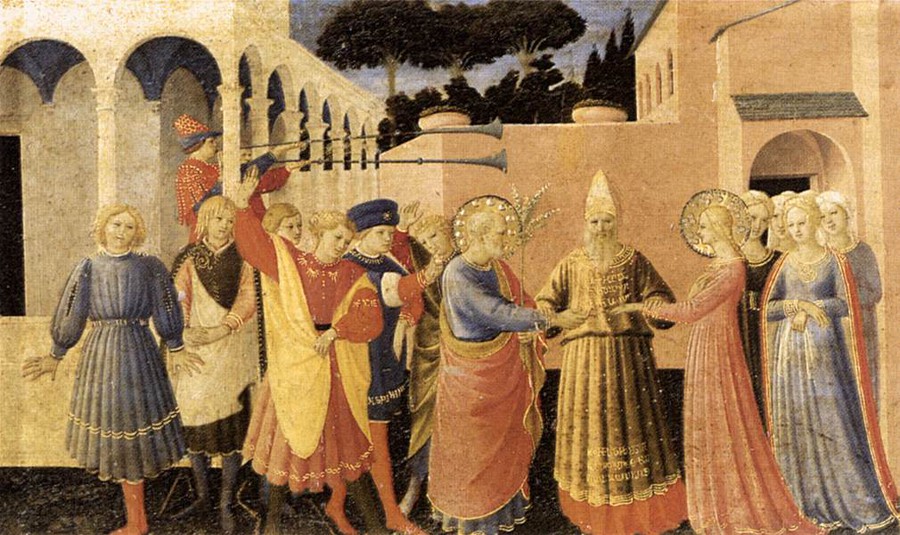 Think back to last spring. Were you on campus, trying to survive midterms? At home, succumbing to senioritis? Josephine Geczy, a first-year visual arts and art history double major from London, was in the midst of a six-month apprenticeship with a seasoned fresco restorer in the heart of Florence, Italy. I know, casual.

Josephine’s story starts back in England, where she turned down a spot in Oxford’s selective art history program in favor of taking a gap year. “I basically just needed a break,” she said, “My school was a real bubble.” Josephine accepted UChicago’s offer of enrollment for the following year and set her mind on Italy, where she hoped to work as an au pair (a person who lives with and in return assists a host family in a foreign country).

Josephine researched potential au pair placements while helping her family move to their new home in Melbourne, Australia, and later while visiting a cousin in Berlin. At last, she coordinated with a family in Rome, but just a week before the start of her employment, everything fell through. The clock was running out on her, as was her bank account.

So, naturally, Josephine packed up and took a train to Florence.

“I walked from the Santa Maria Novella train station, and when you walk from Santa Maria Novella you arrive right at the steps. I arrived in the evening—and it wasn’t pouring down raining—but I arrived, and I still think that the Duomo is more beautiful at night. I had been traveling all day with my bags from Berlin, and when you finally get there it’s just like...” she inhaled deeply. You know what I mean? Like, ‘I have arrived.’”

Josephine spent her first week in Florence in a hostel (read: an entire week alone, with no knowledge of Italian, in a slightly unsettling hostel). She then proceeded to blow her savings on the next month’s rent, and panic set in again. In the evenings, Josephine attended a weekly life-drawing class, meeting local students with whom she explored the city. “Florence is small,” she reflected, “and all life is centered in the piazza.”

Pressed for money, Josephine found work with a florist and liaised with a potential host family, finally nailing the au pair job and getting a tiny room all to herself in the northern quarter of the city. Each morning, Josephine helped little Lorenzo and Julia get ready and head off to school, picking them up later in the afternoon (lovely children by the way, though she could not say the same of the parents). Weekdays from 8 a.m. to 3:30 p.m., Josephine was free.

But not too free. For her birthday, Josephine’s parents gave her a precious gift: Italian classes at the British Institute in Florence. Classes were seven days a week, three hours a day, with bi weekly, hour-long conversations. Fortuitous and fruitful conversations, in fact.

At the start of April, two and a half months into her Florentine escapade, Josephine had her weekly conversation with a woman named Brunella, a Florentine illustrator and, specifically, an illustrator with friends. She was thoroughly taken with Josephine and introduced her to her friend Elena, a fresco restorer desperately in need of a cheap apprentice. Semplice.

Now 70 years old, Elena began her long study of art conservation at the age of 18. A former Uffizi (one the world’s most famous art museums) employee, she still restores and evaluates frescoes. Under Elena’s wing, Josephine learned the theory of fresco restoration and even worked on a mini fresco of her own, frequently assisting Elena with off-site visits. “She was really lovely,” Josephine said. “And we just got along.”

As apprentice, Josephine also played the role of personal assistant. “I was mainly in charge of her studio and mixing her colors for her, buying pigment for her—basically kind of organizing her life.” Their days were simple and lovely: They’d start early, chat about life, break for espresso every couple hours, blast some Puccini, and soak up stereotypical Italian life. Elena only spoke in rapid Italian with a heavy Florentine accent, not to mention a Tuscan dialect. Nonetheless, Josephine caught up quickly.

“She wasn’t doing the Sistine Chapel,” Josephine said. “But the Accademia and the Uffizi, they have these giant holdings that no one ever sees, and they send out for their stuff. We’re talking Renaissance. I wasn’t allowed to touch that. I was allowed to watch her doing it.” Laughing, she expanded, “It wasn’t like people were saying, ‘Oh yeah, Josephine, that church over there, go and paint.’ It was more about being in proximity to that kind of work.”

She broke down the basics of restoration for me:

“Fresco is difficult because the pigment is actually within the plaster. So the issue comes when things get too damp, and you can get mold within the plaster. So often you just have to scrape away at the plaster and then paint on top. It’s like one smooth surface, and if you were to put plaster on top off that, it would really show. So you do it ‘a secco’—dry color with water, which sits on top but isn’t actually within. You often use specific animal fats, but there are lots of issues with that. For example, in churches, sometimes when frescoes have been done, they’ll add things on top, but because that’s sitting on top of this surface, it can still acquire a lot of dust and grime. It’s also just a lot of cleaning.... It’s mainly just cleaning.”

Even though Josephine never set a brush to a work of her beloved Fra Angelico, her apprenticeship experience left an indelible mark, both molding her persona and confirming her interest in doing practical art at UChicago.

“I would say I’m a lot happier now. Having that time by yourself, when you’re only responsible for yourself—well OK, I was responsible for making sure the children didn’t set themselves on fire—but just having time means that you get to know yourself. You become aware of yourself a lot more. With people, you realize what you like and what you don’t like as much. And with all that comes a sort of calm.”

Josephine has enjoyed her experience at UChicago thus far, though the lack of studio space accessibility in Logan concerns her. Between taking classes at the British Institute and working with both her host family and Elena, Josephine became proficient in Italian, and she plans to enroll in Italian courses on campus. As she looks toward a future in art publishing, Josephine will continue her studio work and study of art history—and perhaps work on a mini fresco from time to time.

She reflected, “I really realized when I was working at this apprenticeship that doing art and making art, and being around making art, is something that I need to have in my life. I’m my happiest when I’m doing that.”