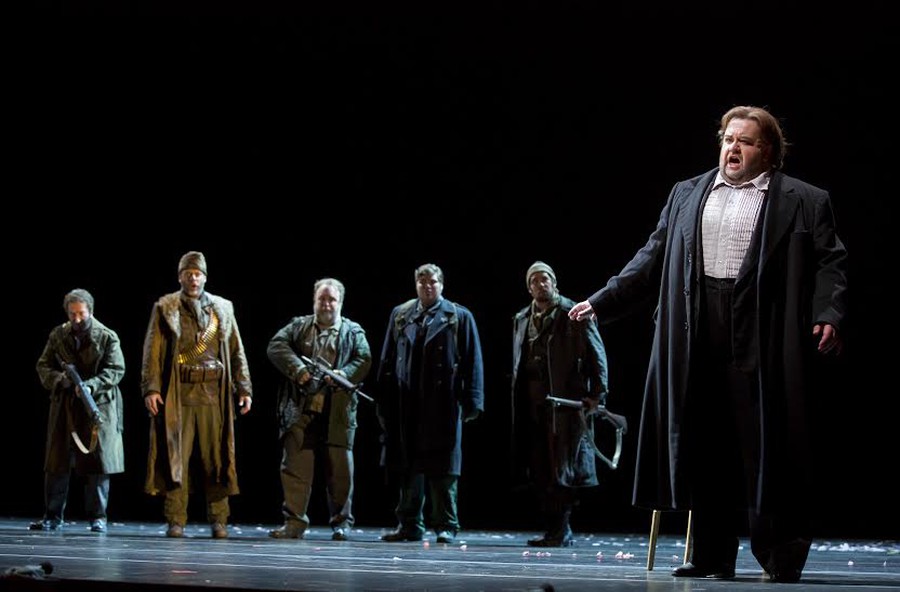 This season’s Lyric Opera productions have ranged from the good (Anna Bolena), the bad (Don Giovanni), and the ugly (Tosca)—its current run of Wagner’s Tannhäuser, however, seems almost political. How better to explain its choice of director Tim Albery’s bombed-out, ruinous production than as a sympathy magnet for the plight of Ukraine? The alternative claim—that it succeeds as an exercise in dramatic vision—is negated by the spectacle of incoherence it presents onstage.

The magic of Wagner lies in his melodies, not his stories. They are better than beautiful: They are irresistible. They function as musical symbols representing people, things, and even ideas. In Tannhäuser they underscore everything from the sensuality of Venus to the miracle of salvation—collectively, they comment actively on the drama as much as they reflect it. Under the baton of Sir Andrew Davis, the Lyric Opera Orchestra succeeded admirably in its interpretation of the score. Thanks to him, I too fell under the spell of Venus as the orchestra seemed to quiver with its gyrating strings and pant with its coquettish woodwinds. And the brass! As supple as silicone and incorruptible as a saint.

However, such rich source material proves unrealized in director Tim Albery’s production. Wartburg Castle, the focal point of the second and third acts, looks like a wreck from the German Blitz on London; its courtiers sport bulletproof vests and assault rifles. While the libretto does establish a history of violent conflict, it does so only in passing. To conjure a complete dramatic vision from four short lines of text is alchemy more fantastic than ever was dreamt of in the Middle Ages. Or perhaps the scenery reflects Tannhäuser’s increasing degradation just in case we missed it in the plot, the music, or even the translated supertitles. If a production adds nothing new, it should at least make an attempt at the original intentions behind the work. More barren than minimalist, Albery’s Venusberg failed to convey any sort of supernatural voluptuousness: It had the all the sensuality of 50 Shades of Grey narrated by Gilbert Gottfried. And to use a gold proscenium arch of all the symbols to distinguish between in-universe fantasy and reality? Nothing is less sexy than a cliché.

I will forgive anything in opera as long as the singing is good. I will forgive incoherent direction. I will forgive poor set design. As the titular Tannhäuser, Botha will not be forgiven: He does not sound heroic. The middle register is there, but heroism is in the high notes. They should ring out with richness and clarion clarity; Botha’s top sounded tense and squeezed, like forcing a square peg through a round hole. For a mortal who enjoyed the favors of Venus, his hymns of praise sounded more like a three-star rating on Yelp.

Thank God for Wagner’s (not the composer, the actress) EliSabeth. Her voice stole the show, with stamina to survive Elisabeth’s punishing melodies and beauty to make them bearable. At first demure and joyful, she lets loose the cannon when coming to Tannhäuser’s defense at the end of Act II. “Hält!” she bellows, the note at once stratospheric and searing, with an intensity that made my ears ring. And I found the best singing of the night in her chorus countermelodies: Her tone softened like butter in a microwave, and managed to blend into yet stay distinct from the choral soup.

Schuster’s Venus was problematic in that she didn’t sound very sexy. Her voice had a pleasant darkness that paired well with seduction, but lacked voluptuousness the higher it went. Schuster’s upper register choked when it mattered most: No wonder Tannhäuser couldn’t wait to get away.

Earlier this season details dropped about the Lyric’s anticipated production of Wagner’s Ring Cycle, a proving ground for any major opera house. “We want the audience to sit down and enjoy a wonderful story,” director David Pountney said. He should take notes from Tannhäuser—on what not to do.