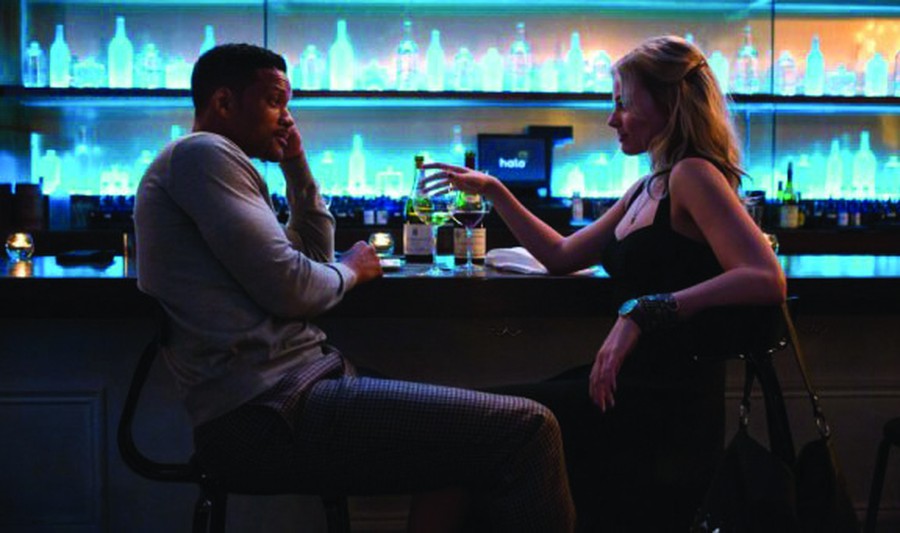 When teaching Jess (Margot Robbie) the basics of pickpocketing, the one thing Nicky (Will Smith) is most careful to emphasize is the necessity of holding the target’s attention. Keep their focus, he says, and you control the person. You can do with them whatever you want. He could very easily be talking about filmmaking, where the object is to keep the audience focused on one thing, while setting up another payoff for later. You can’t let them see the seams, otherwise the illusion falls apart.

This is especially important for a film like Focus, which follows in the vein of crime capers like Ocean’s Eleven, insofar as they both follow incredibly clever people doing clever things to make large sums of money while the audience tries in vain to guess the plot. Focus doesn’t quite succeed in this respect, but the fabric in between the seams is enough to satisfy most viewers.

The film follows Nicky, a con artist, as he attempts to rip off a slew of affluent travelers and compulsive billionaires throughout the movie’s somewhat disconnected plot. The two halves of the film take place in New Orleans and Buenos Aires respectively, with a three-year gap between the two and nothing to tie them together other than Nicky’s on-again, off-again tutorship and courtship of amateur thief Jess. Smith and Robbie essentially have to serve as both the film’s lead actors and the glue that holds it together. They are given many, many scenes together, and while their verbal sparring feels more like play-fighting than the truly confrontational romance that this kind of movie calls for, they bring wit and energy to each scene and keep the film moving where the plot sometimes fails.

This is a return to form for Smith, who has not delivered anything resembling a good performance since 2007’s I Am Legend and has not given what could be considered a classic “Will Smith” performance in over a decade. He still seems somewhat wary to dip too far back into that old persona in Focus—in the eyes of his harshest critics, it’s still a significant barrier to him being considered a “serious actor”—but this is by far the loosest and funniest performance he has given in years. He looks like he’s having fun acting again, which is a good sign for his future endeavors.

Where Smith has been at this since the 1980s, Robbie is only 24 years old and in her second major film role after The Wolf of Wall Street. She is still finding her range as an actress but gives a laudable performance, playing the plucky upstart with such enthusiasm that you wish she would be given more to do than be the recipient of Smith’s witticisms. Those are something of a guilty pleasure: The film is extremely funny in some parts, though almost always at the expense of Jess.

The actors are both capable, but are forced to weave their way in and out of a plot that doesn’t really make sense. The film is full of dropped plotlines, forgotten characters, and disconnected narrative arcs. The viewer can’t help but sense that there is a puzzle or some kind of deception at play, some impending revelations characteristic of the crime caper genre. Perhaps the film will all magically come together at the end, and the disparate plotlines will finally make sense. This is not the case. Some twists do come, but it rarely feels as though the characters behind them were in a great deal of control over their outcome. Rather than perpetrating a masterful plan, it feels as though they are simply making things up as they go along. In fairness to the characters, though, it feels as though the writers did the same.