“Lives are being lost, young black people are dying and we won’t be ignored anymore.”

Nine members of the Trauma Center Coalition were arrested while protesting a University-sponsored fundraising event at the Ritz Carlton Hotel in downtown Chicago on Thursday.

Nine activists from the Trauma Center Coalition (TCC) were arrested by the Chicago Police Department (CPD) after blocking off North Michigan Avenue for approximately one hour on Thursday evening. About 60 other people continued to shout and picket from the sidewalk, protesting the lack of a Level I adult trauma center at the University of Chicago Medical Center (UCMC).

The rally was a collaborative effort by the Trauma Center Coalition, which consists of five community and University organizations, including Students for Health Equity (SHE), Fearless Leading by the Youth (FLY), the Kenwood Oakland Community Organization (KOCO), the Kenwood Church, and the Jewish Council on Urban Affairs.

The protest was planned to occur at the same time as a University event at the Ritz-Carlton Hotel for the $4.5 billion “Impact and Inquiry” fundraising campaign. Protesters marched from the main entrance of the Ritz-Carlton at Water Tower Place to the northeast corner of North Michigan Avenue and Pearson Street, and a string of nine activists in lockboxes made a line across North Michigan Avenue, blocking off traffic amid honking cars.

“I’m feeling really empowered right now. We are out here right now because the University of Chicago is at the Ritz schmoozing millionaires for money,” TCC staff organizer and FLY member Veronica Morris-Moore said, bound to the other protesters in the lockboxes, before her arrest. “Lives are being lost, young black people are dying, and we won’t be ignored anymore.”

Earlier that evening, activists rode in a school bus paid for by KOCO and FLY to the Ritz-Carlton. They disembarked by carrying a black coffin with the painted slogan “No Trauma Center, Lives Lost” and pro–trauma center, anti–University efforts for the Obama Library banners.

Inside the fundraising event, seven members of the Trauma Center Coalition disrupted the schedule by blowing air horns and whistles on the stage intended for the screening of a University promotional video. Two different groups of protesters disrupted the event in this way, and each group was escorted out of the building by hotel security. None of these people were arrested.

“We wanted to make sure that donors weren’t isolated from our voices and that we had a physical presence in the building,” SHE member Shiro Wachira said. “It went exactly according to plan.” 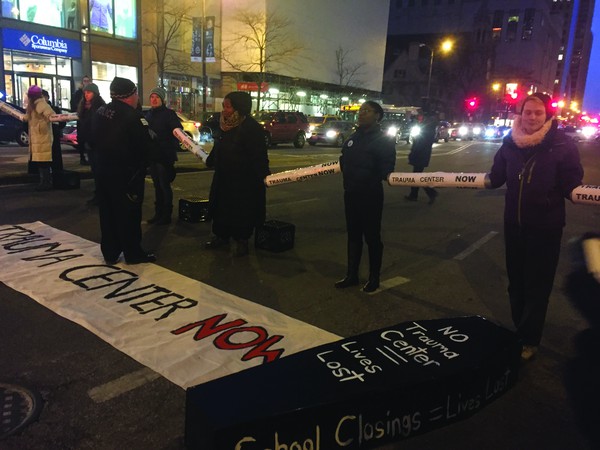 Pedestrians unaffiliated with the TCC spoke with protesters about the lack of a Level I adult trauma center on the South Side and the University’s bid for the Obama library. The street was filled with chants such as “U of C is wack, give the trauma center back” and “Whose lives matter? Black lives matter.”

According to Emilio Comay del Junco, SHE member and one of the protesters, the arrested protestors were charged with Class C misdemeanors, then released. When the CPD first arrived, they cleared the majority of protesters from the street and onto the sidewalk, cordoned off by a makeshift wall of bicycles, but left the ones in lockboxes where they were. Officers were seen trying to persuade the activists to remove themselves before they were arrested.

“What are you trying to accomplish?” one officer asked a protester.

When asked about how he felt about being chained to a lamp post, student activist Woody Travers laughed, “OK, good. I think I might be getting arrested in a minute.”

“The tactic is not to appeal to a sense of moral responsibility on the part of the administrators...it’s about making the choice about not agreeing to a trauma center...so uncomfortable that it’s no longer appealing to them,” del Junco said.

University spokesperson Jeremy Manier declined to comment on whether the students who were arrested will face disciplinary procedures within the University.

The UCMC is currently conducting an internal study about its “services, capacity, and community need,” according to UCMC spokesperson Lorna Wong. In December the UCMC raised the age of admission of its Level I pediatric trauma center from 16 to 18.

Editor’s Note: One of the nine arrested protesters is an outgoing co-editor-in-chief of The Chicago Maroon. She had no editorial involvement in The Maroon’s coverage of this event.