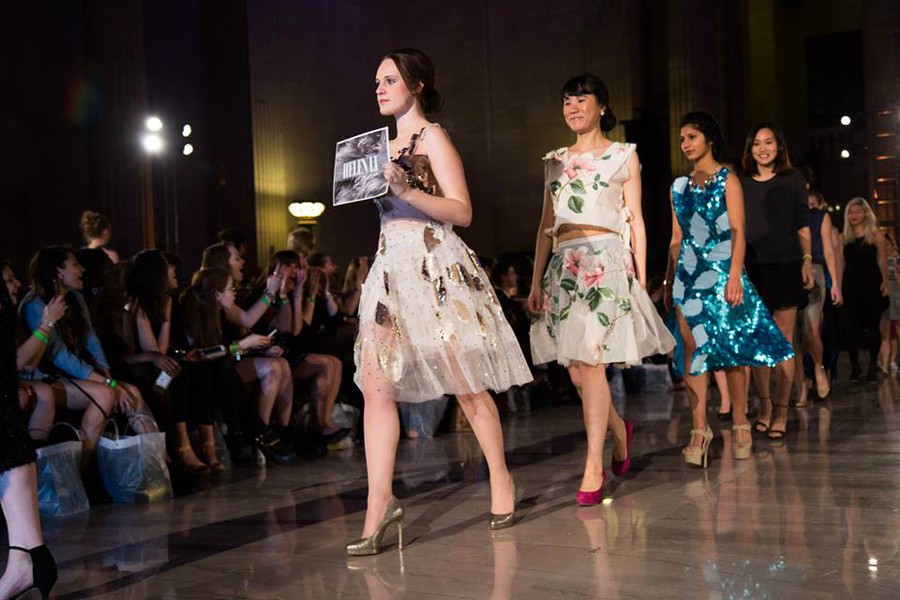 On Friday evening, Chicago’s Union Station was transformed into the glamorous venue for UChicago’s most impressive fashion event of the year: the MODA show. Tickets to the event went on sale February 4, and VIP tickets sold out in a record-shattering four days. The event has been growing in popularity over the past years, as evidenced by the staggering speed at which tickets sell out, as well as by its growing attendance, which came in at a whopping 1,300 people this Friday.

After the doors opened at 8 p.m., guests had an hour before the show started to check out each other’s outfits, schmooze, munch on the snacks, examine the cocktail menu if they were 21 or over, and pick up their goodie bags if they bought VIP tickets. The event was supported by a striking 18 sponsors, and this year’s goodie bag contained an assortment of free swag ranging from Caffe Latte–flavored Vita Coco to beauty products such as shampoo and shaving cream.

The layout of the event was consistent with that of last year. The main floor of Union Station was divided into two sections: one for the cocktail reception and the other the location of the runway. The runway itself was made up of three corridors: two rows of wooden seating dividing the space and three more outlining it. VIP guests were seated on the wooden benches, while guests with regular tickets stood behind them.

After cocktail hour, the show began with a performance by the student dance fusion group Maya. As audience members settled down in their seats, 12 dancers were frozen across the runway. Their performance began with the Vitamin String Quartet version of Sia’s “Chandelier” and as the songs switched the dance group impressed the audience not only with their moves but also their coordination within such a complicated space.

As soon as Maya’s performance came to an end, the first set of models came out. This year’s theme was “nonchalant glamour” and 22 designers, only two of whom were not affiliated with the University, took up this year’s challenge. Each designer presented at least three outfits that were modeled by members of the University undergraduate community. The designing process was very demanding, but extraordinarily worthwhile. In the words of third-year Ray Thamthieng, who co-designed three outfits with fourth-year Elisa Li, “the most exciting part is seeing our outfits come to life on the runway from the designs we created in November. Also, seeing other designers’ pieces and how proud they were of their finished product was very exciting.”

Unlike professional fashion shows in which the audience stares at the clothes with judgmental, stony faces, a large portion of the MODA show is about the vocal support for the models. As models strutted down the runway, friends, and on occasion family members, shouted out their names in support and awe (both at the dresses they were wearing but also at the courage it takes to step on the MODA runway).

While modeling for MODA may seem daunting, it was without doubt a very rewarding experience for this year’s participants. Third-year Samantha Buck, one of three models for fourth-year designer Tori Borengasser, wrote of the runway experience, “I went into it thinking it would be a fun and silly thing to do. While it was definitely fun and at times silly, I came out with a really deep appreciation for the artistic ability of all the student designers. It’s so inspiring to see all the talent that exists within our campus, and I am really grateful that I got to be a part of making their visions come to life.”

The night was an enormous success thanks to the efforts of the 17 board members, all designers and models, and 40 volunteers, all of whom made this fabulous yearly event happen. The cherry on top of this glamorous night was the after-party at the hip Chicago club the Underground—the details of which will not be reviewed in this article.