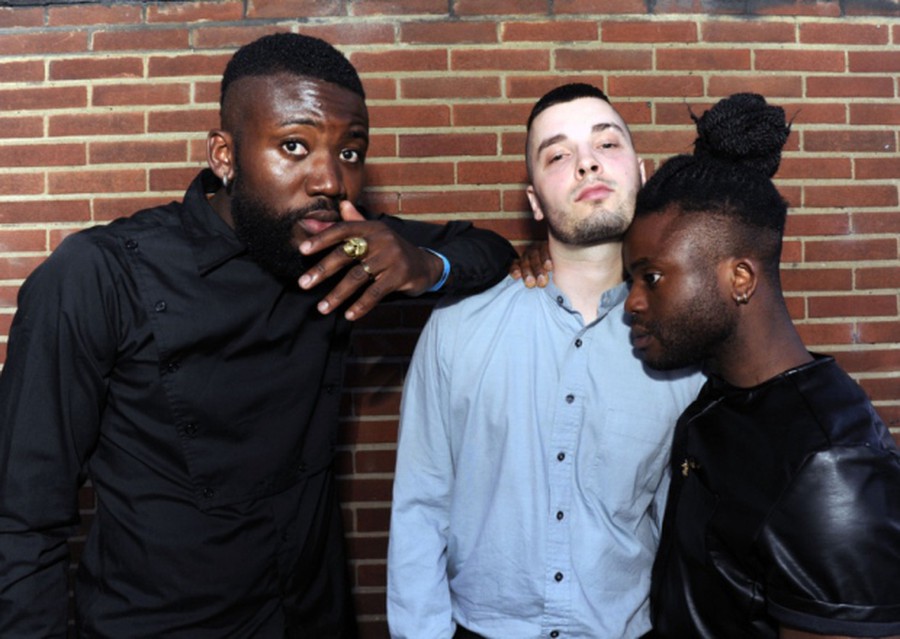 Young Fathers sent British music journalists into a tailspin when it won the Barclaycard Mercury Prize in 2014; while their labelmate Kate Tempest had been the journalist’s favorite, Young Fathers were stony-faced and unwilling to talk. In addition, nobody knew what to call their music. “Is it hip hop?” journalists asked. There are definitely some elements present in their songs. R&B? Only in the choruses, but not much elsewhere. Pop? Young Fathers assented.

Typical Young Fathers. It chose the label that says the least.

It soon came to light that Young Fathers – comprised of Alloysious Massaquoi, Kayus Bankole, and G Hastings – simply didn’t want to talk to reporters from uber conservative publications. This was the first sign (besides their winning album, Dead) that Young Fathers wasn’t going to hide their politics. The Edinburgh trio’s follow-up, White Men Are Black Men Too, is about as subtle as The Daily Mail.

All of the indicators pointed to an edgy, biting second album – a lyrical welling up of racial frustrations. And it is, in most places. “Sirens” references police brutality. “The police are on cocaine/And they wanna know my name/Said they’ll love me all the same” and the lead track, “Still Running,” describe going through youth as a black man with the lyrics, “Hiding from the torture, fire’s what you’re under.”

The song “Old Rock N Roll” attempts to explain. In it, Massaquoi, who wrote the rap, says “I’m tired of playing the good black, I’m tired of having to hold back” but that “I’m tired of wearing this hallmark for some evils that happened way back, I’m tired of blaming the white man, His indiscretion don’t betray him.” A note by Massaquoi accompanying the album stream offers another partial explanation: “We came at it [issues of race] from a different angle, a positive angle.”

But why would an album that’s 99% powerful protest songs and descriptions of racism against blacks have such a conciliatory title? White Men Are Black Men Too does not feel as though it fits with what the lyrics reveal.

This striking choice of title can be presumed to be part of Young Father’s efforts to spread and broadcast their message to the largest audience possible; thus, their decision to file their music under the “pop” genre. “Pop” is a general enough label to encompass the range of sounds on White Men Are Black Men Too, and by range of sounds, I mean a full orchestra and the kitchen sink: piano, poppy whistling, synthesized organ, jingle bells, sirens, dialogue (“Fucks sake!”), and feedback-laden guitar. There’s a lot going on, and it takes quite a few listens to adjust to it. A special kind of musical genius is necessary to possess that kind of sonic palette and insert those effects in a way that doesn’t take away from the melodies.

The gorgeous melodies on White Men Are Black Men Too are enhanced by Massaquoi’s singing voice. It’s absolutely incredible; his voice is warm, thick, emotive, and powerful, and he keeps it on a tight leash, knowing exactly when to choke a note off, bringing it to a gradual end, or letting it howl with finality.

Massaquoi is not the sole vocalist: Each member does some of everything, although Massaquoi has a special focus on singing, Bankole on rap, and Hastings on creating beats. There’s less rapping on their second album than there was on Dead, but Bankole and Massaquoi still spit their words deliberately. And because Young Fathers’ members all contribute vocally to each song, there’s plenty of tight interplay between Massaquoi, Bankole, and Hastings. Their stunning vocal choreography shows off the 13 years they’ve spent making music together.

The backing music of White Men Are Black Men Too is where Young Fathers shine. Their influences are diverse, including Marvin Gaye, Massive Attack, and Nigerian and Liberian music, the latter two courtesy of Bankole and Massaquoi’s parents. It is this combination of styles that makes the album so beguiling: White Men Are Black Men Too is at the nexus of hip hop, R&B, EDM, and pop.

And at the end of the day, you can dance to it. Hastings’ beats on “Still Running,” “Shame,” and “27” are easy to bounce to, and “Rain or Shine” has a synth-y escalation that makes it feel like the next club banger. Although Young Fathers use the term “pop” in order to avoid others, there is, in the end, an element of pop in the most traditional sense of the word. Massaquoi called White Men Are Black Men Too the band’s “interpretation of what a pop album should be”—a cool combination of musical experimentation and social critique.