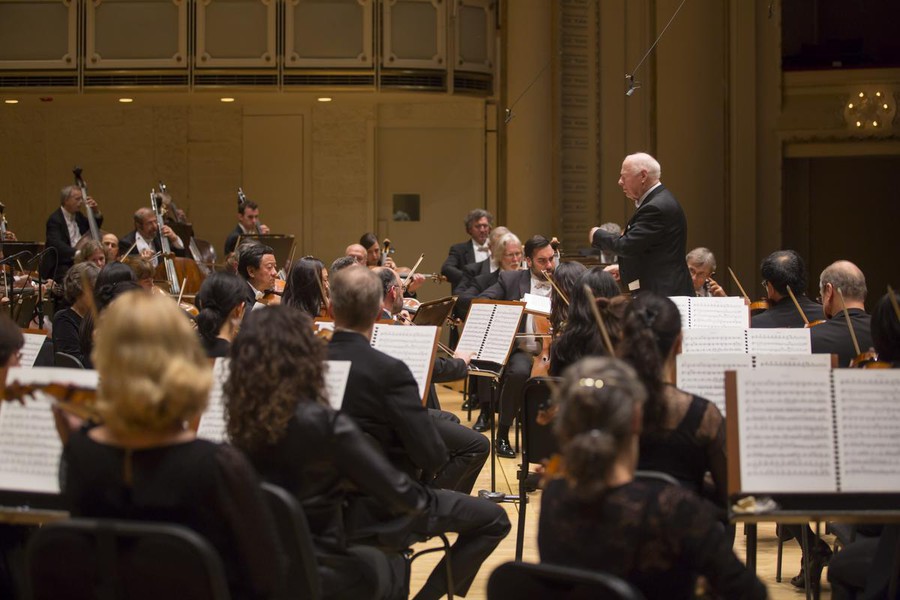 The Chicago Symphony Orchestra’s Thursday performance of Gustav Mahler’s Seventh Symphony (Mahler 7) was not unlike the weather that evening: terrifyingly stormy, and at times unpredictable, but in every way awe-inspiring.

After all, when a conductor like Bernard Haitink, one of the great Mahler interpreters of our time, joins forces with the CSO, itself a first-rate Mahler orchestra, the result is sure to be dynamic. Not only does the CSO have a special relationship to Mahler 7—it gave the piece its American premiere in 1921—but it also has a uniquely close relationship with Haitink. He last appeared with the CSO in 2013, three years after vacating the principal conductor post that had been created for him in 2006. During this time, he bridged the gap between the tenures of the CSO’s last music director, Daniel Barenboim, and its current music director Riccardo Muti.

And it’s a relationship that shows no obvious signs of decline, if his podium performance is any indication. At a very limber 86, Haitink still exerts a tight, unostentatious control over the ensemble, his gestures supple but exacting. As the harp-pluck and sustained cello note that ended the second movement dissipated into nothingness, his hands traced the natural diminuendo of the harp’s decay, making the cellos sound in every way like an organic continuation of the harp’s final attack. For a moment, Haitink appeared to control the sound waves themselves. The illusion was absolutely uncanny—unlike anything this reviewer had ever seen.

Sometimes called “Song of the Night,” Mahler 7 is obfuscating in every sense of the word, which explains why it’s one of the more divisive Mahler symphonies out there. In many ways, Mahler is at his most enigmatic, his most grotesque. Interestingly, it is said that he was out rowing on the lake next to his summer home with his wife when inspiration for the first movement suddenly hit him. (One wonders what Alma Mahler thought upon hearing the brooding, minor-key opening, as it’s not exactly the sort of music one expects to be conceived during a romantic afternoon date. But then again, Mahler was a man of contradictions.)

When executing grotesque music—and there is plenty in the Seventh—performers have a fine line to tread: They must convey the exaggeration intentionally written in the score without succumbing to it completely. There were a few instances of overzealous execution in Thursday’s performance which distorted the balance of the orchestra and veered the performance toward caricature and not of the self-referential sort Mahler probably intended.

But these overblown exaggerations, which in any case were few and far between, certainly did strut individual players’ stuff. In Mahler’s most tumultuous passages, solos soared high, stratospherically high, above the din of the orchestra. Or, in the case of principal timpanist David Herbert, over nothing at all: He pounded out the timpani solo in the beginning of the fifth and final movement like his life depended on it. The result, though deafening, was deliciously frightful.

It’s just another reminder that when it comes to the CSO, one is dealing with the cream of America’s musical crop. But they’re also human. Trombonist Mick Mulcahy, who performed the opening tenorhorn solo, ran into some trouble when he played the first note of the solo—which is the first melodic entrance in the piece—noticeably flat. Thinking fast, he made a few deft adjustments to his horn, and his next entrances proved much more tonally secure.

With a runtime of nearly an hour and a half, the Seventh has the sprawling length of a true Mahler symphony without the conventional tunefulness that so endears other works from his oeuvre to audiences. A cohesive performance of the Seventh demands that the audience be kept on its toes, and the CSO certainly delivered in that respect. Ninety minutes had never felt so short, and a nearly full house brought Haitink back for four bows before, finally showing his age, he wearily plodded off stage for good.

There will be one more performance of this program at Symphony Center (220 South Michigan Avenue) this evening, April 14, at 7:30 p.m. Audience members are welcome to attend a preconcert lecture at 6:30. UChicago students are eligible for discounted tickets, $15 online/$10 at the box office. See http://cso.org/ for more.