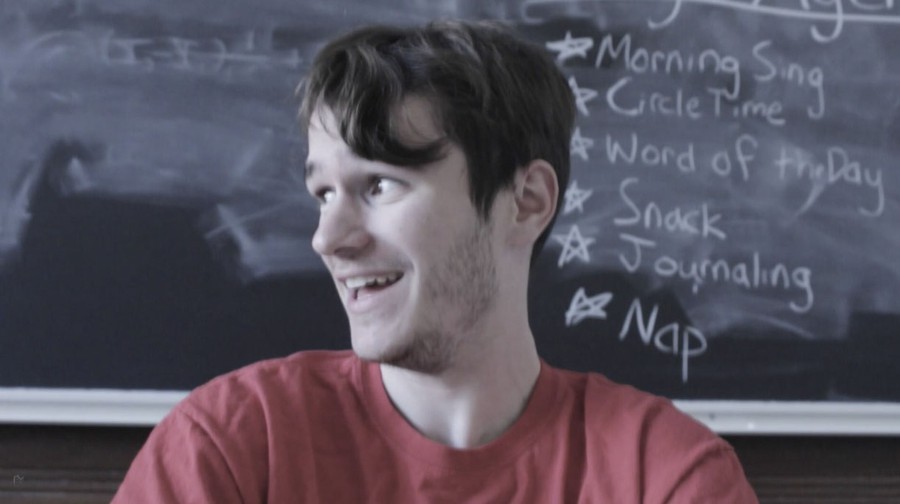 Despite what its name may lead you to believe, 48 Hour Film Fest does not involve movies that are 48 hours long. Instead it’s a cutthroat competition in which teams of four are given 48 hours to write, film, and edit a short film to compete for the prize of a movie-themed bobblehead. This year I joined a team with the goal to make friends and a movie and to take that coveted bobblehead for myself.

Once each team had a title, sound equipment, a tripod and a camera, they were sent off to make their visions a reality. What ensued was one of the most fun weekends I have had in college so far. Friday night was devoted to coming up with the script, finding props and scheduling the rest of the week. My film team decided we would follow three characters: an aggressive and profane journaler, an ambitious daydreamer, and an insightful yet completely inept observer. With these characters in mind, we went to bed before waking up bright and early for a solid 12 hours of filming, which took us from the pool in Ratner to Treasure Island and the annual Awkward Ball in International House. As we frantically ran from location to location, calling on friends to be extras and to act in our strange little film, the inside jokes and silliness piled up, peaking during editing. In total, it took about 16 of our 48 hours to edit our footage into the little, incomprehensible baby that was our film.

The next day, all 16 films debuted to a nice crowd at the Max Palevsky Cinema. The night began with the film “Trail Mix” by team Sippycup. This was the team’s fourth and final year competing, and their entry last year, “Communist Daughter Works the Late Shift,” was a crowd favorite. This year they did not disappoint, and their movie began with a humorous look into the process of making trail mix before proceeding to follow the life of a drone outside of the trail mix factory. I couldn’t help but laugh at every shot of the drone grocery shopping, driving a car, or showering.

I don’t have the space to explore each film, but here are some other scattered impressions I have of the rest of the night: “Peach” was the most visually appealing film of the evening. The majority of the film was filmed on the Ferris Wheel at Navy Pier, and the shots of the lights of the fairground and city were absolutely breathtaking. My favorite moment of the night came during the movie “Agreement” when the camera shot flashed to the main character as she typed the name of her screenplay into her computer, titling it “My GREAT screenplay.” One film, “***,” was set entirely in Milwaukee. Why? I’m not really sure, but it was gorgeously shot and served as a refreshing departure from the University and Hyde Park locations typically used for the 48 hour films. I will refrain from reviewing my own film, but I will say that even though I had to ask my teammates, “What the fuck is our movie?” during its premiere, it still seemed to garner positive reviews.

Mimi Wilcox and Sean Raju’s film “To Our Parents” provided a perfect ending to the evening. As my teammate Claire aptly put it, filmmaking can be a somewhat self-centered affair. As a director, one tries one's best to make visions and ideas absolutely perfect, and it can be all-consuming. Wilcox and Raju, however, managed to make an entirely selfless film that was truly moving, without feeling forced or kitschy.

In the end, the bobblehead winners were team 20th Century Socks and their film “L’oeil,” translated as “eye” in French. They were one of the few teams that decided to make a drama instead of a comedy, and the plot involved a bunch of what appeared to be job applicants sitting in one room and having staring contests with each other. Each contest overflowed with tension and suspense before the eventual break. The color correction, costuming and general production value gave it the extra edge.

Ultimately my team didn’t win the prize, but weren’t the friendships built and the film crafted in just two days the real prize? Sure. I’ll just keep telling myself that until next year.