"As the Ifficial Reggae Movement band took over the reigns, audience members slowly shook their way to the front stage and clapped, shimmied, and sang the show to a close." 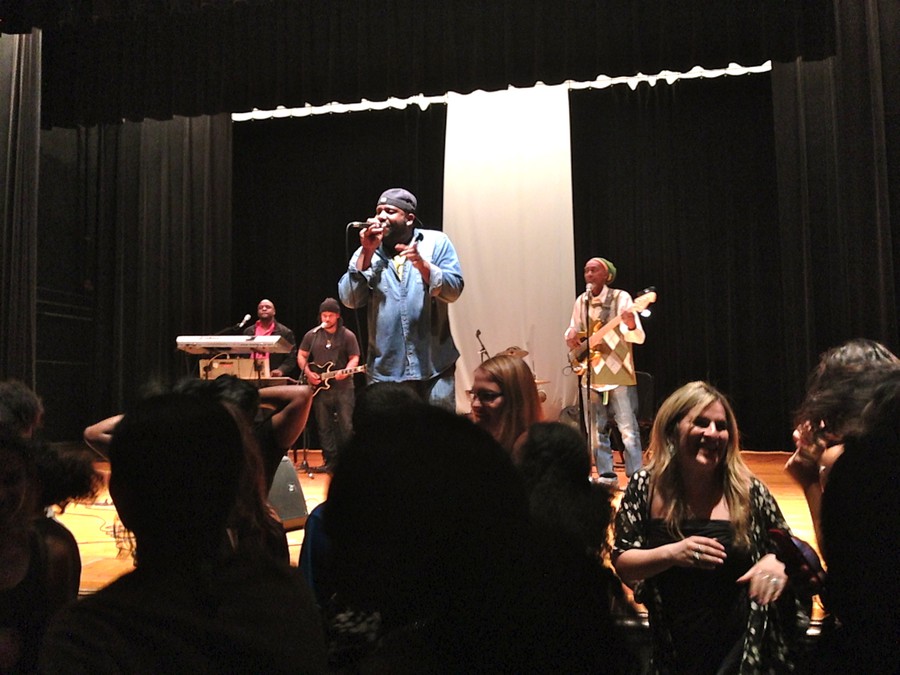 The African and Caribbean Students Association (ACSA) took International House by storm this past Saturday evening with its annual spring show, this year entitled Diaspora. The event, celebrating the club’s 10-year anniversary, featured slapstick comedy, dance routines, two fashion segments, vocal and instrumental musical performances, and meditative monologues spoken in various African dialects. The excited crowds flowed upstairs, downstairs, inside, outside, into the seats, and, by the end of the night, onto the stage itself. According to some audience members, the show was not only ACSA’s best performance all year, but also the best of all cultural association shows yet.

Aphrican Ape, a Nigerian comedian based in Miami and Diaspora’s emcee for the night, carried the event, lending buoyancy to tense moments and maintaining crowd engagement for a long three hours. Throughout the night, Aphrican Ape enlightened the audience—a diverse mix of ages, heritages, and affiliations—on pressing and nuanced social issues like the struggles of Facebook dating, the futile methods of avoiding household chores, and the difference between Nigerian and American girls…when it comes to splitting the tab. He later fell to his knees onstage while mocking a telephone call to his religious Nigerian mother, crying, “Amen, hallelujah, amen!” He continued to repeat these crowd-inciting exclamations until his imaginary mother conferred her stubborn satisfaction.

Though most attendees cracked up unabashedly—some solely in response to the audience’s reaction rather than to the emcee himself—other attendees found the humor alienating. In response to Aphrican Ape’s jokes about “your African parents,” a somewhat unamused second-year later remarked to me, “Well, I don’t have African parents.” However, this concern seems a bit unwarranted, for though the jokes themselves were specifically targeted, the punch lines applied universally to family dynamics everywhere.

The first half of the night’s program showcased student performers, monologues on the roles of dance and food, and the first of the two fashion segments—an array of beautifully patterned, more traditional clothing items from Maryam Garba, Kwabena Klassics, and Kayra Imports. The Essence Dance Team, visiting from the University of Illinois, also graced the stage before the audience gorged on the intermission smorgasbord of jerk chicken, oxtail, cabbage, and curry goat.

Chase Woods, a second-year in the College, led off the second half with a segment of spoken-word poetry. He very quickly delved into the difficult historical reality of diaspora, rhythmically expounding on slavery and modern racism to a snaps-filled room. Cameron “Noir” Okeke, a fourth-year in the College, followed Woods’ segment with his hip-hop dance routine entitled “Warrior.” Noir’s combination of music genres and utilization of imaginary props, including items like a computer keyboard and a gun, gave his impressive and entertaining dance a much more serious tone. According to the printed event guide, Noir drew inspiration for this piece from “a story comparing the child soldiers of Uganda to the teenage gang members of South Chicago.”

The show closed with a final monologue on fashion, followed by a catwalk exhibiting modern clothing. The outfits, all designed for women, ranged from business proper to everyday chic. Although these pieces were significantly more contemporary than those of the first fashion segment, they retained similar patterns and colors. Taken together, these two segments artfully demonstrated ACSA’s predominant intention in naming its anniversary event Diaspora: to celebrate cultural history while looking to the future and to the continued act of diaspora. As the Ifficial Reggae Movement band took over the reigns, audience members slowly shook their way to the front stage and clapped, shimmied, and sang the show to a close.