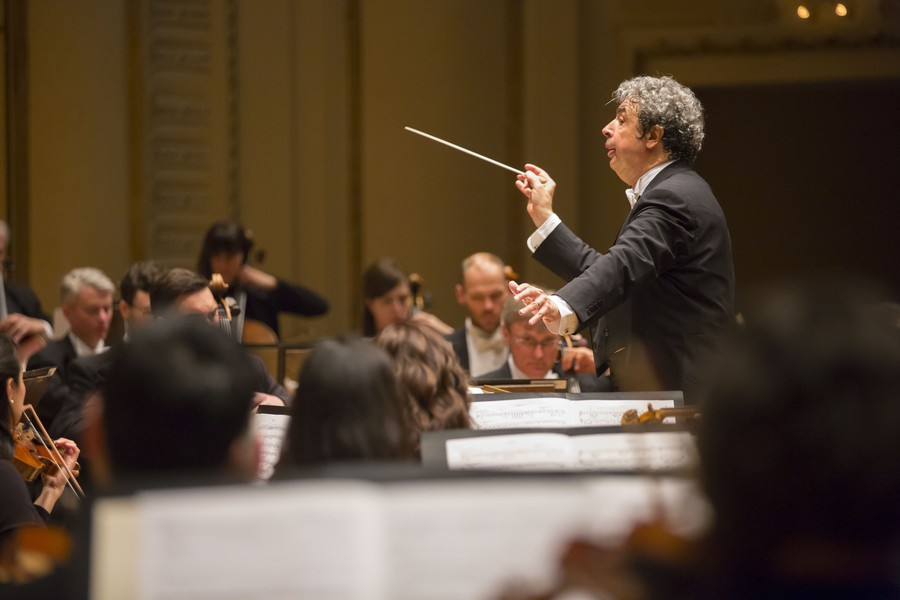 Tell orchestral musicians to prepare a Bruckner symphony, and nine times out of 10 they’ll blanch a little. Falling between the periods which saw Richard Wagner and Gustav Mahler’s greatest outputs, Anton Bruckner’s symphonies take the no-holds-barred, emotional universalism of both composers and infuse it with the inspired piety of Bach. The result? Sprawling devotional proclamations whose music can, at longest, clock in at a taxing 90-plus minutes.

The Eighth, in fact, is Bruckner’s longest, though one wouldn’t have guessed as much during the CSO’s “Afterwork Masterworks” concert on Thursday evening. Bruckner’s last complete symphony was articulated with an elocution too often lost when tackling such an unwieldy work.

Having gone through an almost obsessive editing process, the Eighth often feels patchworked and at times utterly pastiched. It’s no wonder that Thursday’s greatest victory was making a work of many seams feel seamless, and for this we have conductor Semyon Bychkov to thank. He expertly led the CSO in a Russian program last week featuring soloist Daniil Trifonov, and this week he brought the same mastery to the podium. Bychkov’s chemistry with the CSO has been rarely equaled this season, and he has been the most compelling of any guest conductor in recent months. One got the sense that the orchestra was duly engaged as well.

The inhibited drama that defines Bruckner’s music is a true test of conductor-orchestra cohesion: Good Bruckner sounds like an epic narrative, bad Bruckner a shapeless heap of maudlin extremes and repetitive phrases. Thankfully, Bychkov and the CSO lent the Eighth the architecture it deserved.

The first movement was an admirable display of well-tempered might. A stormy movement that whirls itself into a number of tumultuous climaxes, it never succumbed to bathetic excess, save for an occasional soupiness from the strings. The CSO knew when to rein in its power without sacrificing its passion, and it certainly had plenty of power on hand when it was necessary. The Eighth calls for an expanded horn section, and Thursday’s performance saw nine hornists, with four doubling on Wagner tubas (an instrument which creates a sound somewhere between a French horn and a trombone).

The second movement was a scherzo marked by an athletic theme depicting Deutscher Michel, a personification of the German people. The theme is introduced in the violas over shivering, falling tremolos in the violins, and the music whips itself into what sounds like it could be a display of patriotic bravado: The brass snarl, the timpani comes in pounding, and the major-key tonality of the opening peels away into a menacing minor. But Michel is no Uncle Sam: He’s a sleepy lad usually depicted in a nightcap. Fittingly, even in his musical portrait he sneaks in a snooze—a light and dreamy trio emerging like a bud from the scherzo. This part was played especially memorably by the orchestra, with principal harpist Sarah Bullen contributing airy ornamentation.

The third movement Adagio was unparalleled in both beauty and length, and here it becomes obvious that more than just the horns have Wagner’s fingerprints on them. There was a certain broadness in this movement, a harmonic know-how that simply smacks of the German master. (Then again, that goes for most of this symphony: Intimations of the Siegfried motif from Wagner’s Der Ring des Nibelungen popped up throughout—some more explicit than others—and Bruckner outspokenly idolized Wagner). The same restraint which made the first movement so cogent was put to good effect here, the climax made all the more triumphant because of it.

The fourth movement took off galloping, with earth-shattering entrances by the low brass and timpani. (The latter was a bit too earth-shattering; principal timpanist David Herbert impresses at any volume, but less so when he overplays his solos) The fourth movement cleverly incorporates themes from previous movements; it was as though Bruckner was kindly giving us a recap of the journey the audience has been through.

For some more forgettable performances of the Eighth, the recap is not just a graceful musical trick but also a necessary reminder. Not so for the CSO’s performance, which was cohesive from beginning to end and anything but forgettable. In a post-concert Q&A, Bychkov mentioned the importance of “conversational propulsion” in a phrase—that is, just as speech orients itself toward the most important words in a statement, a musical phrase should be subtly shaped toward its most emphatic note or notes. Whether Bychkov intended it or not, his analogy perfectly described his pacing of the entire symphony—never overwrought, never rambling.

And pacing is certainly crucial for Bruckner, both on and offstage. At the end of the Q&A, Bychkov told the audience that the evening’s performance in particular had been a testament to the musicality and stamina of the CSO: It had been the ensemble’s second time that day playing the piece all the way through, the first being a morning rehearsal.

“They are quite phenomenal in pretending it’s a piece of cake,” Bychkov said. “It never is.”