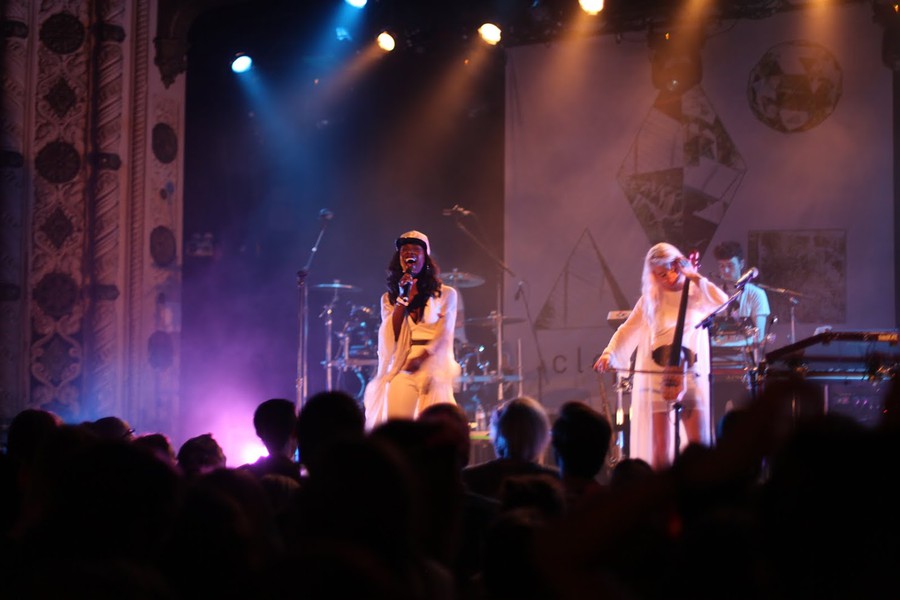 Exactly a year ago, if someone were to have asked me whether I had heard about the band Clean Bandit, I would have responded with a solid no. Today, the Grammy winning band is not only a sensation in its native UK, but is also rapidly growing in popularity in the United States. Its speedy rise to fame was largely the result of its hit “Rather Be”, which was in the number one spot in U.K.'s top singles charts for four consecutive weeks. On its first U.S.-wide tour (it performed in Chicago’s Lincoln Hall in September on a smaller tour) the band is supporting the extended version of its debut album New Eyes. This past Wednesday, prior to its taking the stage of Wrigleyville’s Metro, I chatted with Clean Bandit’s Grace Chatto about the band’s past work, influences, fame, and future plans.

The four permanent members—Chatto, Jack Patterson, Luke Patterson (who are brothers) and Milan Neil Amin-Smith—came together when they were at Cambridge. While Chatto and Amin-Smith had known each other since childhood from playing together in orchestra, the band really came together when they met Jack Patterson. In Chatto’s words, “we just wanted to do something together.” While the band’s work is generally categorized as pop or house, Chatto and Amin-Smith have a background in classical music and Jack Patterson in jazz. Thus, their instruments of choice are cello (Chatto); violin and piano (Amin-Smith); keyboard, bass guitar, and piano (Jack Peterson); and drums (Luke Patterson, who is also the youngest member of the band). While both Chatto and Jack Patterson do the occasional vocals, their vocals mostly rely on collaboration with other musicians.

According to Chatto, the process of finding a vocalist differs from song to song. For instance, the collaboration with Jess Glynne on “Rather Be” was the result of pressure from Atlantic Records. But the case was essentially the opposite during the process of creating their newest hit “Real Love,” for which Glynne wrote some of the lyrics. Usually the collaborators are friends of the band members or musicians whose voices they love upon first hearing. On New Eyes a lot of the singers were young musicians that they met through a community project with which they were involved before Atlantic Record signed them. The way it worked was that instead of paying rent in a studio in London, they took up trainees from the area. One of these trainees was Sharna Bass, who sings the vocals on “Extraordinary,” and whom the band members met when she was only 14. While Clean Bandit collaborates with a number of musicians, only one singer is touring with the band: London-based Elisabeth Troy, who is featured on the tracks “Show Me Love” and “Heart on Fire.”

The concert Wednesday night was sold out. About 1110 Chicagoans showed up to dance to Clean Bandit’s catchy beats. According to Chatto, the band did not expect either the fame or the incredible popularity of "Rather Be". In fact, the band “had never thought about America before because it just seemed so far away, so big and [the band members] were just trying to break out in the UK.” “Rather Be” was written later than the rest of the album, and while they did not initially expect the scale of its success, it became immediately evident when the band started performing it in festivals across the U.K.

As Chatto explained, “We saw that people were reacting particularly well to that song, and like, singing along by the time of the second chorus even though they were just hearing it for the first time. So we decided for that reason to release it and to record it.”

Clearly the band made the correct decision. The audience at Metro nearly exploded with joy when the band played the single during its encore. Other favorites were “Real Love,” “Extraordinary,” and “Show Me Love,” although all the songs were incredibly well received. Along with all of its previously released songs, Clean Bandit surprised the audience by performing a new song called “Superstar.” Written in collaboration with Andrew Martin, “Superstar” leans more toward hip-hop and further from house—a direction Chatto said was probably going to be the trend on their next album, which they are currently writing. As they did with New Eyes, they are approaching the new album by looking at each song as an independent project; the underlying theme for the album comes later.

Clean Bandit’s success across the world becomes apparent with the staggering near-256 million views on the music video for “Rather Be” on YouTube. This was shocking to the band because the process of making the video, which was filmed in Tokyo, was “such a small production,” Chatto explained. “It was just me and Jack in the crew and then one of our friends [came]…and we were just like, relying so much on people who wanted to be involved and be in the video and [who would] let us film in the fish market and stuff and at that point we had no idea that video would grow and have like 260 million views.” Even now that the band is signed by Atlantic Records, it continues to play a large role in the makings of its videos. While Chatto, who used to produce them, is no longer involved due to lack of time, Jack Patterson continues to direct them. The two most recently released were “Stronger” and “Real Love.” Starting with its first recorded song “Mozart’s House” (which was released in 2010 and shot while both Chatto and Jack Patterson were studying in Moscow) the music videos have been a memorable and highly entertaining part of the band’s work.

The band’s name derives from the Russian way of emphasizing a noun with the word “clean,” where it functions like the words “total” or “absolute.” Chatto explained that a Russian lady once “affectionately” referred to the band members as total bastards, thereby inspiring the band’s name, which they translated into English to come up with Clean Bandit. While I doubt that they are indeed “total bastards,” it is clear that the band is a “clean” sensation.