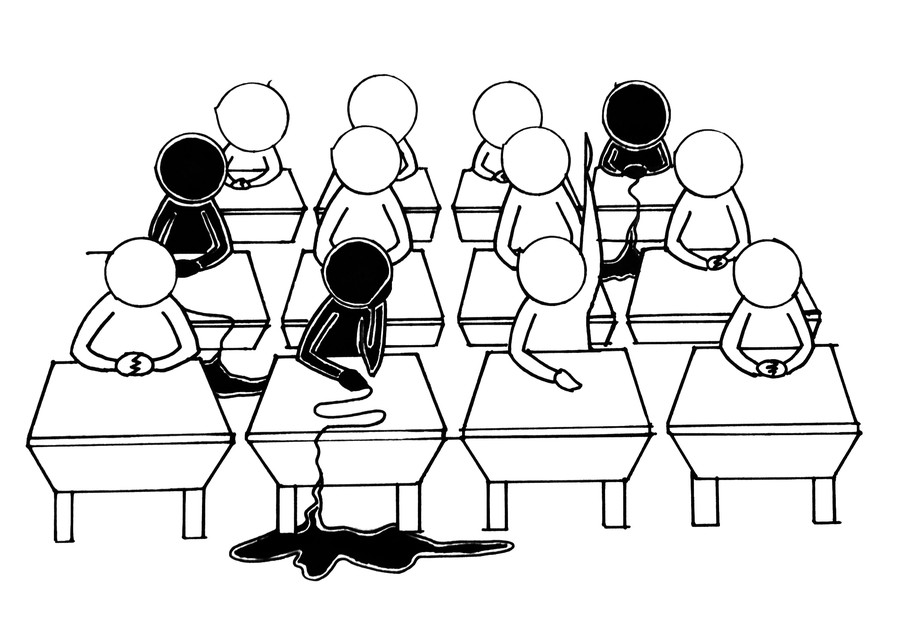 It was late fall quarter of my second year in the College. I was walking home to my nearby dorm when two masked figures approached me from behind and dragged me into a side alley to do things to me that I have trouble recounting to this day. What happened became a sort of negative catalyst that allowed everything else in my life to fall neatly apart shortly afterwards.

News of the incident spread, and as I let the walls guarding my privacy deteriorate in exchange for momentary influxes of sympathy from people on the outside, the weather grew colder and my nights became inexplicably longer and distinctly unbearable. During this time, I had a hard time determining which of my emotions were actually “valid”—figuring out how many of them stem from a desire just to feel acknowledged or loved. Often I found that I was only capable of discussing these emotions in the most abstract or indirect ways. I could handle talking about “depression,” but only if I could wrap it in a metaphor or deconstruct it in analytical ways for a literary assignment. But to confront it—boldly, plainly, unforgivingly—asked too much from me, like handing me a mirror in the middle of a public outburst, asking me to stare at a reflection that is absolutely mine and yet one that I somehow still cannot recognize.

In the mornings after the incident I began a biweekly ritual of waking up to the first of an extended series of alarms between 4:30 and 5:00 a.m., hauling myself out of bed at last on the fifth or sixth of these reminders, and getting into one of the communal showers on my dorm floor. All that in exchange for the privilege of being able to openly sob for about 20 minutes straight, since this is the time I knew everyone else in my house was usually asleep and I was least likely to be heard.

Once during my time in Catholic school, a priest told me “crying is the body’s way of releasing the poison,” and I thought of those words each morning as I did this, during my shower and again afterwards. I felt alert even in exhaustion, staring up at the ceiling of my room, thinking of ways to avoid confronting the rest of the day’s responsibilities—ways that I could keep eking away at my depleted reserves of energy more and more efficiently, saving all my vital stores of it for the major tasks in my life, like attending lecture on the day of a quiz or the weekly phone call to my mother each Sunday night, where I proceeded to exhaust seemingly enormous amounts of it in convincing her that I’m doing all right and that no, I promise, I don’t need to go “talk to someone” or to leave school and come home early.

On less forgiving days, I would cancel appointments with no explanation because I knew that even if I did show up, I’d effectively be a shell of myself—devoid both of my usual characteristics and of the desire to project them even out of habit. Instead I stayed in bed and binge-watched entire television seasons at a time, wasting money I still felt unaccustomed to having on take-out or delivery for the small reprieve of avoiding the pressures of the dining hall. I spent nights staring at problem sets and BuzzFeed articles, wondering how I could have made it this far when my emotions oscillated reliably between a self-righteous kind of indifference for things outside of my head and sudden periods of full-blown panic about everything all at once.

Somehow I managed to remain “stable” enough to turn in most assignments and receive grades that seemed to satisfy the people around me enough. I finished second year in dreadfully low spirits and with an overwhelming sense that the “life of the mind” was really just a test of endurance that I was now unsure I would be able to actually complete.

Flash-forward to today, over a year since the events of that quarter and the onslaught of the emotions and experiences that followed, which I can now fully acknowledge as symptoms of my depression.

I can’t tell you exactly when things began to get better, but I do recall how, almost imperceptibly, the days began to merge into one another and the regular routine of everyday living picked up its pace again, demanding that I adapt.  Pretty soon I was able to go from a few days to a few weeks without waking up to cry or forcing myself to eat and go out. Pretty soon I was planning ahead again and taking stock of the inventories I’d been neglecting for a whole year: which friendships I could still count on and what goals I hoped to accomplish in various areas of my life again.

Being depressed at an elite university is much like being poor at an elite university: There are always more people like you around than you’d think. Of course, as I was disposed to grossly personalizing every experience—to interpreting each passing event through the confined lens of my suffering, my pain—I hardly took notice of all the distress signals my closest friends and circle of acquaintances (mostly low-income or first-generation students as well) were all beginning to display to varying degrees. Some friends had taken abrupt leaves of absence (something that only a few of us had even heard about), and others had taken to new habits (drugs, alcohol, prescription medications, spiritual awakenings) or new houses, leaving the rest of us behind and finding their own ways to cope with the same feelings, the same fears. Even when I had friends who had the courage to explicitly confess to me the extent of their own experiences, as I would console someone as they cried on my shoulder—it all felt so remote; I felt like, “yes, this must be awful for you and I understand that you’re in pain, but you don’t really know what it’s like to feel bad—not the same way I do.”

For me, depression manifested through uncontrollable thoughts like those, and hours of guilt spent contemplating the ways in which my anxieties had turned me into exactly the type of person I always feared I would become when taken from the structured lifestyle of my upbringing—self-centered, uninspired, and unreliable. While the sense of loneliness I felt was “real,” the experience of it was caused in some ways by my inability to notice the opportunities for genuine understanding around me—my inability to place into perspective the things outside of my own head.

Yet regardless of my quality of life during that time, coming to college had objectively improved my standard of living by far. Through the generosity of scholarships, I felt more financially secure and materially stable than I had throughout the majority of my upbringing. For the first time since being a small child, I felt less restricted by my external environment than ever before.

When it came to “fun,” I ostensibly had plenty of it—in bolder, richer, more expensive ways—yet I never would have called myself a “happy” person then. The brief thrills I experienced did nothing to assuage the sense that I was observing myself do things more than I was actually enjoying them. Eventually, those times became a shoddy but salvageable foundation for my remaining relationships, and anticipating their arrival became the fuel I burned in the final hours before a big paper was due or after a particularly rough morning.

So, all that time I lied to myself that I couldn’t be depressed—not with the scholarship, not with the circle of friends, not with the “freedom.” These were things my unstable but not unhappy childhood had not always been able to afford me. On top of that, the University of Chicago had been the school of my “dreams”—or rather, my emotionally-invested fantasies about doing well in The Future turned obsessive—and so even if deep down I knew it was time to finally wake up from some of the more fanciful aspects of these (This is the place I’m going to find my soul mate! I’m going to find my life’s passion here! College is the most formative time of my life!), I wasn’t ready to let go of the suspicion that it was I—not the school—who was fundamentally messed up. I lied to myself by believing that even if I didn’t feel content at all, I couldn’t actually be unhappy, that even though I was struggling or wading my way through all my courses, I was still embodying the “life of the mind,” and that the feeling of “depression” was for people with less active social lives or fewer available resources than mine.

Last week, after the results of the Student Government elections came out, a first-year student came up to congratulate me on securing the Community & Government Liaison position and to say that she really “admired” me. After thanking her for the comment and making a joke about how it really wasn’t that big of a deal since I was the only candidate on the ballot, she got very serious and said that it wasn’t that I’d got the position, but that I’d “put myself out there” in the first place that had inspired her.

The problem is most of us don’t really need more people who can “inspire” us. We need people who can understand. People who can empathize. People who will interpret, not just listen. People who aren’t just always around, but always there. Most people who are struggling here—academically or emotionally—don’t need another role model; they need someone who’s consistent, someone who will know the difference between an actual cry for help and a cue to bring some drinks and snacks over. They need a university that doesn’t make them feel designated into one of two classes: achievers or screw-ups, with accolades for the former and apathy for the latter. They need a supportive group of people they can actually trust, not a governing body of other students or a committee that “represents” them.

Yes, they are usually not as bad as you think they are.

But without examples of people around you to actually show you that, it’s hard to feel like everyone else isn’t actually doing as badly as they say they are, and easy to feel like you’re actually on your own. And if we only use our platforms to discuss our successes, it’s hard to remember that that’s all they are: platforms. The foundation—the core—of us as individuals is complex and in constant flux; no one’s always on a winning streak; no one’s always on their “A” game, in spite of what their Facebook or Linkedin profiles might suggest. This University asks us to be “uncommon,” yet predictable; “quirky,” but neurotypical. As students, it’s in our hands to create a more supportive culture among ourselves: one where we agree to not shame each other for being fallible or to make mockeries of our shared afflictions, but where we are kinder toward each other out of compassion and not complacency, where we are there for each other in times of public campaigning and times of depression, where politics and individualism come secondary to our commitment toward fostering a less oppressive and more inspiring environment for everyone.

Nina Katemauswa is a third-year in the College majoring in political science and philosophy.