“There is a lot of artwork to it and it is the only one out there.... Ivanhoe is truly unique.” 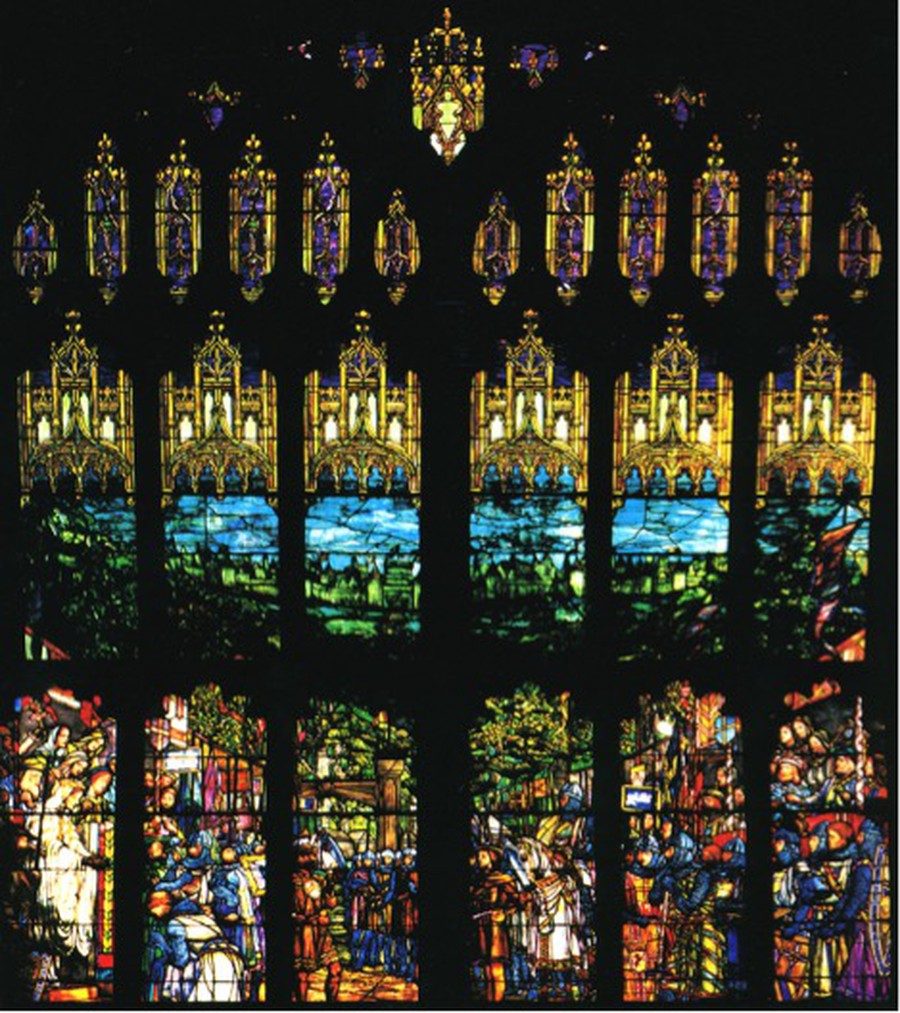 Prior to its conversion into a dining hall, Bartlett featured a colorful display of Ivanhoe stained glass windows, which was placed into storage in 2001.

Courtesy of the University of Chicago Chronicle

The conversion of Bartlett from a gymnasium into a dining hall in 2001 resulted in the removal of a historically and artistically significant stained-glass window from the east side of the building. Nearly 15 years have passed and the glass remains crated in storage, despite the University’s promises to restore and reinstall it. The administration’s lack of initiative has alumni and professionals concerned that architectural apathy is a growing trend on campus.

Edward Peck Sperry completed the window in 1904—the same year Frederic Clay Bartlett finished his mural, “Athletic Games in the Middle Ages,” which still sits opposite the staircase in Bartlett’s atrium. Both works were meant to inspire student-athletes and complement the building’s neo-Gothic architecture. Sperry’s window depicts a mythical medieval scene: the crowning of Ivanhoe by Rowena. Sperry was most likely a professional acquaintance of Frederic, the brother of Frank Dickinson Bartlett. After Frank, a Chicago native, died an untimely death in 1902, his family donated $125,000 to UChicago in his honor.

Rolf Achilles, art historian and curator of the Smith Museum of Stained Glass Windows at the Navy Pier, has a special appreciation for the Ivanhoe window. He recalls walking by Bartlett and admiring the display as a student of medieval history at the University in 1976 and 1977. “What a wonderful symbol of justice versus injustice,” he said of the Ivanhoe window.

Ivanhoe is one of the largest plated opalescent windows in the country, and as such generates variegated colors resulting from internally refracted light. The effect is milky colored streaks. Neal Vogel, principal of Restoric, LLC, in Evanston, is quite familiar with the window. “There was never a time when the light coming through was glaring or harsh,” Vogel said. He distinguished the Ivanhoe glass from the glass in Bond and Rockefeller by its depth and content. “There is a lot of artwork to it and it is the only one out there. Tiffany glass is not one of a kind like most people think…. But Ivanhoe is truly unique.”

Karl Rahder (M.A. ’89) wishes that current students could appreciate the window like he did when he attended the College. “As any good piece of art does, it transports you. To have this so easily accessible—to be transported into this other world—is a transformative experience,” he said.

The University commissioned Brunner/Cott Associates, Inc., a Boston-based architectural firm, to renovate Bartlett. The firm assembled a team of sub-consultants that included East Coast art glass conservator Julie L. Sloan, LLC, whom Neal Vogel says is not known for a conservative approach. According to Senior Vice President for Facilities and University Architect Steve Wiesenthal, the need for extensive conservation work was identified during the renovation.

Vogel believes the window might never have been removed if the University had sought a second opinion. “There is more than enough talent in the Chicago region to conserve and/or restore the Ivanhoe window to museum quality standards,” he wrote in an e-mail.

The University of Chicago Magazine from October of 2001 featured a photograph of workers removing the glass with a caption reading, “The window, which depicts the tale of Ivanhoe, will be placed in storage until funds are raised to clean and restore it.”

Rahder felt that the University had had enough time to raise the necessary funds when he inquired about the fate of the glass last January. Wiesenthal responded in an e-mail to Rahder: “In our annual budget process we will be updating the estimates for glass restoration so that a decision can be made about reinstallation. Given many competing priorities for finite funds, I cannot yet confirm if and when the windows will be reinstalled, but please know that this is a question we hope to answer soon.”

The question remains unanswered a year and a half later. Wiesenthal estimates that the cost of restoration and reinstallation will be at least several hundred thousand dollars. “We will do a thorough estimate and bid the work once the funding is available.”

Vogel foresees the project costing a maximum of around $600,000, a number that could be significantly smaller depending on the state of the window. In 2008 he wrote Paul Schwab, then– University architect, asking for an opportunity to examine the window and consult on the project. This was his second attempt—the first was in 2003—to engage the University. Both times, the University showed no interest.

Vogel and Achilles agree that insufficient funding is no reason to keep Ivanhoe in crates. Unlike a painting, the glass can be showcased almost anywhere there is light. Vogel wrote in an e-mail: “If the funds are not available for a proper conservation/restoration effort, perhaps it could simply be cleaned and displayed in front of light boxes in one of the many interior spaces at the U of C.”

Rahder thinks the cost is irrelevant. “If the University had the funds to remove the glass in 2001, it shouldn’t take them 14 years to find the money to replace it. And preserving the U of C’s irreplaceable architectural heritage shouldn’t be a priority that is driven by dollars to begin with,” Rahder wrote in an e-mail. “What troubles me as much as the absence of the glass is what looks like a University-wide attitude of simply not caring about the architectural heritage of this University,” he said in an earlier interview.

Wiesenthal defended the University’s handling of its architectural heritage, which has been criticized most recently with the announcement of satellite dorm closures. He wrote: “While we manage a portfolio of work that includes everything from multi-million dollar new construction (such as Campus North Residence Hall & Dining Commons) to repairs and renovations of existing facilities, large and small, we take great pride in our careful and deliberate approach to caring for our heritage buildings.”

Achilles believes the University’s inaction regarding the Ivanhoe window is part of long-running anti-art sentiment. He cited the near-divestment from Frank Lloyd Wright’s Robie House in the 1970s and the conversion of the Chicago Theological Seminary into the Saieh Hall for Economics at the expense of Hilton Chapel.

Rahder thinks that Hilton Chapel could have been saved if people had known about its uniqueness and beauty. “But now it’s too late—it’s just a classroom. But Bartlett? It’s there. It’s just an empty space with some Plexiglas and it can be restored. This is something we can do something about. That’s why I’m hopeful.”