UBallet presents: Pirates of the Mediterranean

The fun, exotic, swashbuckling drama of this work starkly contrasts with the disturbing presence of human trafficking embedded within the plotline. 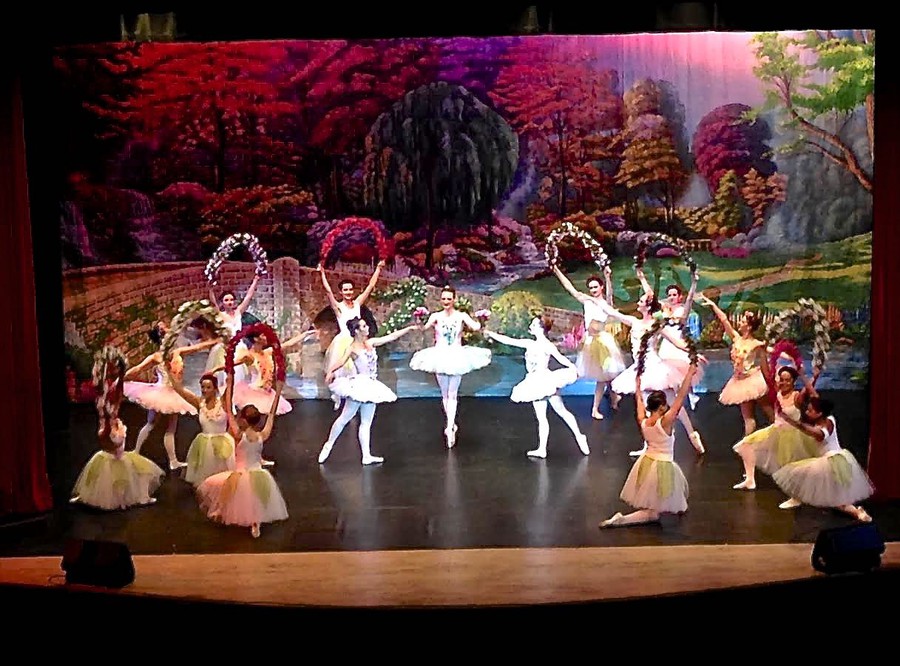 “You know how people say it takes a village to raise a child? It takes a country to put on a ballet,” said Amanda Block, interim artistic director of University Ballet, in reference to this past weekend’s production of Le Corsaire.

A country indeed. This year’s spring production witnessed the collaboration of everyone from students to faculty and staff to professional and lifelong ballet lovers commuting from two and a half hours away. This diverse group tackled a ballet typical of the classical style, urged onward by the upbeat score of Adolphe Adam.

Le Corsaire is a lively, playful tale of romance, pirates, and kidnapping. The plot centers on the coveted Medora, a Grecian slave in love with the corsair Conrad. Despite their promise of love, Medora finds herself sold to the powerful yet obtuse Pasha by the slave merchant Lankendem, spurring Conrad on an Odyssean quest to retrieve her. He endures poison, mutiny, fighting, and an inevitable storm on the high seas, but of course, in the end, the lovers are reunited.

It is distinct among ballets for its spirit of ceaseless adventure, as well as the predominance of pantomime, the universal gestural language of ballet. “It really is like a foreign language,” Block said. “Unless you’re aware that it is a new language, it just looks like gestures.” To accommodate this, the cast decided to preface the performance with a quick pantomime lesson to introduce the audience to this theory.

During the Sunday performance, Mandel Hall was oppressively hot, yet the dancers persevered. UBallet matched the building intrigue of the plot by revealing more and more talent and increasingly complicated maneuvers. Among the standouts was first-year biology major Kyle Wickham, a dancer with absolutely no prior ballet experience who happened to notice UBallet at an RSO fair.

“I was involved in musical theater [in high school] and wanted to continue that somehow, but I didn’t know [how]. This was something new, so I just did it,” Wickham said.

Directors and dancers alike raved about Wickham’s improvement over the past months, and, from the audience’s perspective, he certainly commanded the stage as Lankendem, leaping across the length of the floor and managing to hold a three-second lift above his head, a feat which inspired directors Amanda Block and Janey Lee to squeal with pride.

Similarly, third-year Wes Mills, who took on the daunting lead role of Conrad, only has a year of dancing under his belt and joined on somewhat of a whim. “A friend of mine…actually convinced me that they needed more guys in ballet,” he said.

Le Corsaire encountered challenges as well. In the middle of the Saturday night performance, the backdrop for Act II ripped, obliging the directors to close an outer curtain and forcing dancers to execute their leaps within an even more confined area. The greater issue, as many dancers admitted, was the overall preparedness of the production come crunch time.

“Even during tech week and after Tuesday night, I was thinking this wasn’t going to turn out well,” Mills said, “but then I just go get Harold’s and try to forget about it. It wasn’t until Thursday that I thought this ballet would be presentable.”

While the Sunday performance went off without a hiccup, one nagging, subtler issue remained: The fun, exotic, swashbuckling drama of this work starkly contrasts with the disturbing presence of human trafficking embedded within the plotline. It is taken as a given, and while Le Corsaire does not glorify this reality, it portrays it. “Even though in the actual course of the storyline the issue of human trafficking is taken lightly, I think that UBallet…made an effort to confront the issue,” said core dancer Shawnteal Peery in an e-mail. “I felt much better about my participation because they faced the issue head on,” she said.

UBallet chose to sponsor the Dreamcatcher Foundation, an organization committed to ending human trafficking in Chicago. “It’s just not something you think of that exists in the world today,” Mills said. “Even if you do, maybe it’s something reserved for other countries—not the U.S. or not Chicago—but there’s a lot of human trafficking going on in Chicago itself and it’s a) terrifying and b) something that never really would have come to the forefront of my mind if it wasn’t for this ballet.”

Amanda Block expressed a similar view, stating, “I see it as compelling people to talk about things in a new way. You can read an article or watch a Law & Order: SVU episode about human trafficking, or you can see a ballet.”