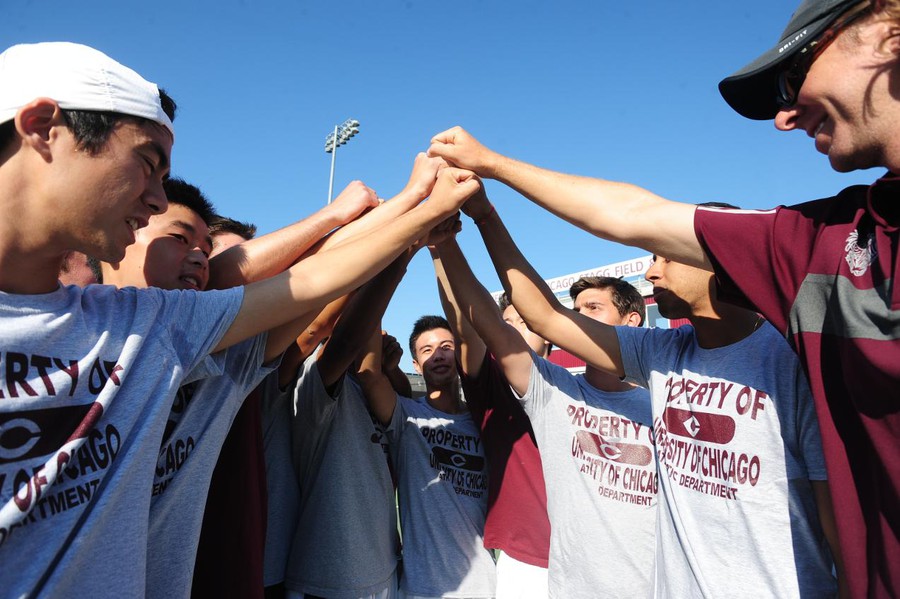 It’s February 14, just two weeks after season’s start. Chicago is about to begin the first game of its doubleheader, also its sixth match of the year. Each Maroon player, whether on the singles or doubles court, takes his position.

The pregame nerves soon give way to a familiar, comforting sensation. They’ve been through it so many times before, seen an incredible number of balls and returned an even greater count with shots of their own. And soon enough, after the starting signal, the past repeats itself. Chicago dominates.

On one court, first-year Nick Chua loops a forehand winner just inside the outer edge. On another, second-year Sven Kranz paints the midline with an ace. And so it is for each Chicago player: a crushing overhead volley, an unreturnable drop shot, an exquisite backhand stroke, and on and on and on. The Maroon players aren’t just playing tennis, they’re playing tennis the way only great teams can. That day, Chicago would go on to win both of its matches 9–0.

But the final product hadn’t always been so pleasing. In fact, just a year ago, the South Siders finished 11–9 and failed to earn a spot in the DIII NCAA tournament. It wasn’t a bad season, of course. But it wasn’t much better than average either. The team lacked what so many other great ones had: instead of poise and assurance, there had been uncertainty and doubt. Instead of a lion’s will, there had been an insipid, uninspired malaise. Things look destined to remain unchanged. But among the dying embers, there were brilliant sparks.

Along with some of the great returning players, including fourth-year leaders Deepak Sabada and Ankur Bhargava, many talented first-years were added to the squad. Immediately, things changed.

That offseason, ambition mixed with experience, confidence with a renewed edge. Day after day, the players pushed themselves and each other. Week after week, the players put in extra time honing their skills and perfecting their strokes. As weeks turned into months, the team looked entirely different than it had looked before.

As Head Coach Jay Tee explained, “The…thing that really stands out is the team’s work ethic and their drive to be a great team. They completely changed the culture of the team from one where we made excuses and looked for an easy way out to one where guys are continuously striving to improve to be the best.”

And the incessant practice immediately translated into results. By the end of the regular season, Chicago held a 14–4 record. Three of their losses, moreover, were narrow 5–4 defeats and all came against ranked opponents. Soon enough, Chicago had found unmatched confidence. As Leung explained, “with the close matches we lost to top ranked teams, we realized that we in fact could compete and beat every single team in the country. There is no team in the country that can utterly destroy us with peace of mind. If someone does beat us, we will give them a couple shots to the gut while going down.”

Entering UAA competition, however, Chicago’s DIII Tournament hopes weren’t yet sealed. Each game was being played with the highest of stakes on the line:

“I knew from the first day that we had a team that could make a run in the NCAA Tournament, the real challenge was getting there. We play in an extremely competitive conference and this year the NCAA only took five at-large selections, which meant there was a possibility that a top-10 team would get left out of the tournament.  We knew going into the UAA Tournament that we had to finish third to give ourselves a chance,” Tee said.

And sure enough, Chicago did just that. They knocked off No. 12 Case Western and then—after losing 5–4 against No. 2 Emory in the semifinals match—beat No. 10 Carnegie Mellon to take third place in the UAA Championship. Chicago had punched its ticket to a DIII NCAA Tournament.

The Maroons, though, weren’t satisfied yet. Making the tournament was great, no doubt. But they had their sights set on something far greater. “We were honestly expecting to win the whole NCAA tournament, with very little competition,” said Leung.

In the first two rounds, Chicago was well on its way to accomplishing its goal. They easily defeated No. 36 Coe and No. 18 Gustavus Adolphus (5–1 and 5–2, respectively). In the quarterfinals, though, Chicago faced a daunting opponent: current No. 2 Amherst College.

In an up-and-down affair, with shifting momentum and expectation, the Maroons pulled out possibly its gutsiest win of the year. They had knocked off the defending national champions 5-4 to advance to the semifinals match against Middlebury. Unfortunately, though, Chicago’s run of success ran out. They lost their next two matches to finish fourth in the DIII Tournament.

Despite the Maroons’ disappointment, their season can’t be viewed as anything but a success. Never before had Chicago tennis reached the DIII Semifinals. Never before had they shown such quality and skill. Chicago had proven itself a worthy opponent and a deserving threat for the NCAA title.

With the season over, though, Coach Tee is already focused on the year to come. He has seen how much the team has grown, both mentally and physically, and he is confidently optimistic that next season will be the same. He said, “It’s going to be tough to replace what Ankur and Deepak provided us in terms of leadership and ability but I’m confident that we have some very good leaders already on the team. They saw what it means to lead and they’re ready to step into that role.  This team has always had the talent to compete at the highest level but now everyone realizes that it takes more than that to be a good team. I think right now everyone is motivated to work had over the summer and come back next year ready to make another run.”

For the returning players, it isn’t much different. The sting of defeat still burns, of course. But that is what motivates their play. Leung concluded, “I look back and realized that we accomplished a big goal this year but it is nowhere near what we can do in the future. Our goals are to win the tournament, simple as that. I look forward to being part of the first team to win the NCAA title for UChicago.”