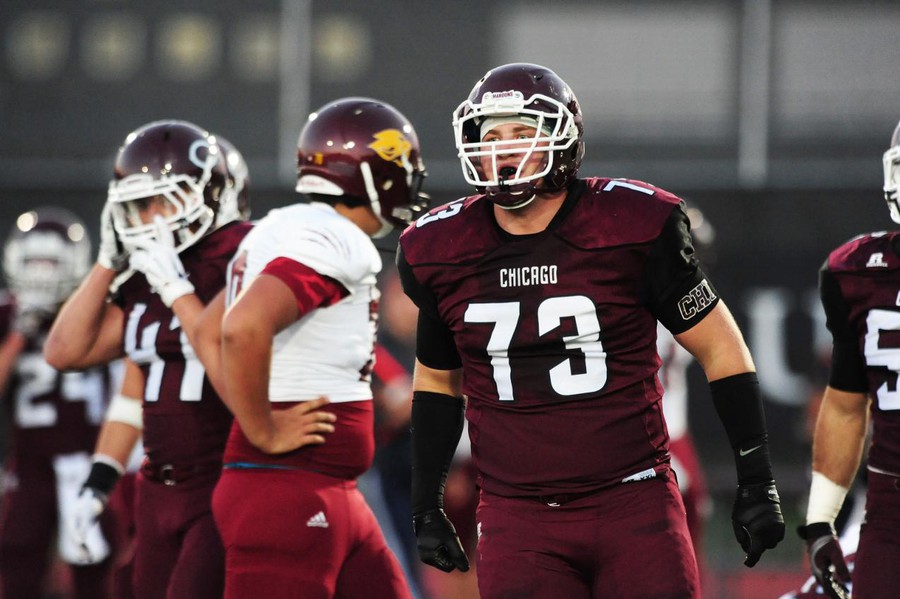 Fourth-year defensive lineman and California-native Scott Mainquist finished his career as a Maroon in dominating fashion. In his senior season, he earned First Team All-American honors from USA College Football, UAA Defensive Player of the Year, and First Team All-UAA.

In the nine games of his final campaign, he made an impressive 43 tackles with three sacks and one fumble recovery, and led the team with eight quarterback hurries.

Looking back at his career, Mainquist said, “The best part about being an athlete at UChicago was that I could play football and use it as an outlet to not think about school and stress. But at the same time it never felt like a job or that I was overworked because of being an athlete.”

Clearly, having such an outlet benefited Mainquist greatly: many of his most impressive accomplishments came off of the field. As a public policy studies major with a specialization in environmental policy, he received UAA All-Academic honors in his first, second, and third years. Additionally, he was a National Football Foundation Hampshire Honor Society member his fourth year.

Outside of football, he is a member of an organization called Chicago Youth Philanthropy Group. With this group, he works once a week with high school juniors and seniors at King College Prep High School, teaching them about philanthropy. The program allows the students to donate $1,000 to an area in their community that they would like to see improved.

Mainquist emphasized his appreciation of UChicago’s balance between academics and athletics, saying, “Coach Wilkerson and the other football coaches always supported us as players and made sure we could get our schoolwork done and encouraged us to not let football get in the way of taking classes we wanted to take.”

After graduation, Mainquist will be moving back to San Diego to work at a law firm before applying to law school. Athletics, though, will remain an important part of his life. He will continue his involvement by coaching high school football.

As he prepares to leave Hyde Park in just a couple short weeks, the former co-captain leaves his peers with one last piece of advice. “I guess the best piece of advice I can give to student athletes is to make sure you are playing your sport for the right reasons. Basically play your sport because you love to play your sport and not for any other reason. Division III athletics isn’t glamorous but if you have the right attitude it can be a truly rewarding experience.”