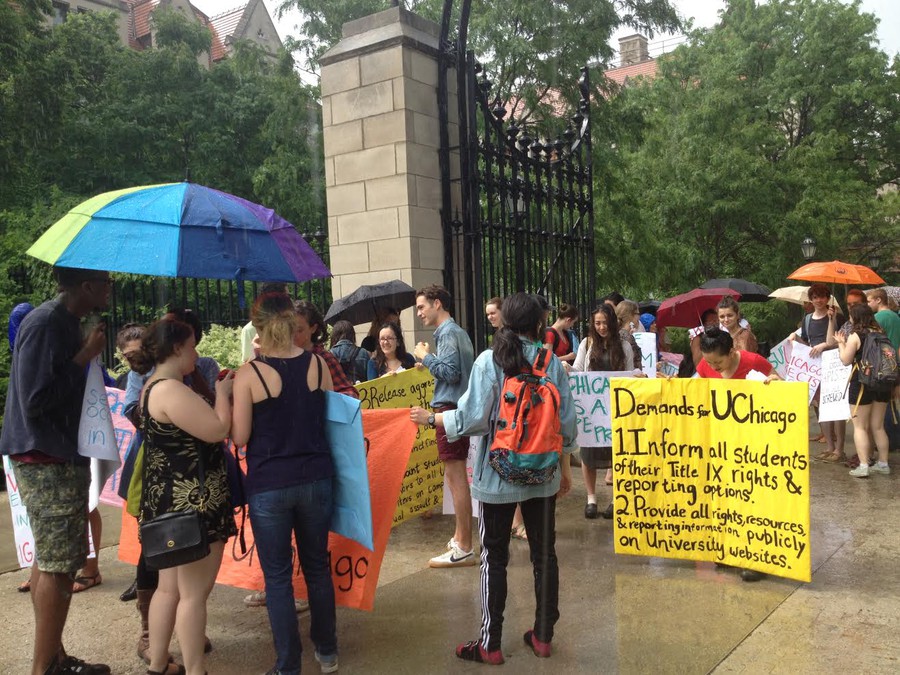 Last Friday, May 29, a group of approximately 35 students gathered outside Hull Gate in the rain to protest the University’s policies regarding sexual assault at a rally called Stand With Survivors at UChicago: Rally for Title IX. The event, organized by Phoenix Survivors Alliance (PSA), was set to march from the gate to Levi Hall, where the Office of Campus and Student Life is located, in order to deliver a set of demands to Dean of Students Michele Rasmussen, Vice President for Campus Life and Student Services Karen Warren Coleman, and Associate Dean of Students and Interim Title IX Coordinator Belinda Cortez Vazquez.

The rain cleared up around 2:40 p.m., just as the group began to march through the main quad holding signs and chanting slogans such as, “Rape culture is contagious, come on Admin be courageous.”

Outside Levi Hall, a few students spoke to the crowd about sexual assault and the University’s policy.

Shortly afterwards, all of the protesters crowded into two elevators and went up to the second floor, where the Office of Campus and Student Life is located. Their intent was to meet with and personally deliver a list of demands to either Rasmussen, Coleman, or Cortez-Vazquez, but they were not able to secure a meeting with any of them. The organizers of the event claimed that the administration had not been receptive to alternative attempts to communicate and had not responded to calls or e-mails.

Phoenix Survivors Alliance had compiled a list of five demands, including: for the University to provide more comprehensive education on consent, Title IX rights, and other sexual assault issues during O-week and for graduate students; for information regarding the rights of sexual assault victims to be put up online in an easily accessible format; and for the University to release aggregate data semi-annually on disciplinary reporting. Additionally, the Phoenix Survivors Alliance demanded that the University create a coordinated community response team to work toward ending sexual violence and for the inclusion of student advocates and victims of sexual assault on University committees designed to address sexual and gender-based violence. PSA demanded that the University agree to its demands by June 5 and that changes be made by the beginning of the 2015 academic year.

The official list of demands acknowledged recent steps that the University has taken in order to comply with Title IX requirements but maintains that these actions have not been sufficient. Some of these recent changes include last year’s consolidation and clarification of University Sexual Assault Policy and the establishment of a disciplinary committee to deal specifically with allegations of sexual assault.

Once on the second floor of the building, the group continued to chant outside the doors of the Office of Student Life. A staff member came out of the office and asked the students to leave, claiming that their presence in the building constituted a fire hazard.

“Well, it’s a hazard for you to have a shitty-ass [sexual assault] policy,” a person from the crowd said in response.

A few of the organizers asked the staff member to bring out a person of authority to address the group’s concerns or to bring someone out to publicly accept the list of demands. However, the staff member said that the intended recipients of the list were in meetings and that she did not have key card access to the office.

After a few minutes of tense negotiations and loud chanting, Lynda Daher, one of the sexual assault deans-on-call, arrived on the scene and made a call to Coleman and Rasmussen's assistant, John Putnam, who refused to meet the protesters. Daher agreed to deliver the list of demands to its intended recipients, although she did not bring anyone from the rally into the office to witness her handing the paper over to Putnam, as the protesters had wanted.

The protesters left chanting “We’ll be back” and left their signs leaning against the walls of Levi.

Daher stressed that she respected the students’ passion and assured the crowd that the list would be delivered into Putnam’s hands and that she would point out the response deadline.

“We are committed to continuously finding ways to both increase and improve what we do around training for students, during new student orientation as well as over the entire academic year. In addition, our planning for 2015–16 has been greatly informed by student input in meetings over the past academic year with individual students, advisory groups and RSOs, including the Phoenix Survivors Alliance,” Rasmussen wrote in a statement.

According to a statement from University spokesperson Mary Abowd, the list of demands will be reviewed by staff members, who will most likely set up a meeting with the PSA to further discuss these issues.