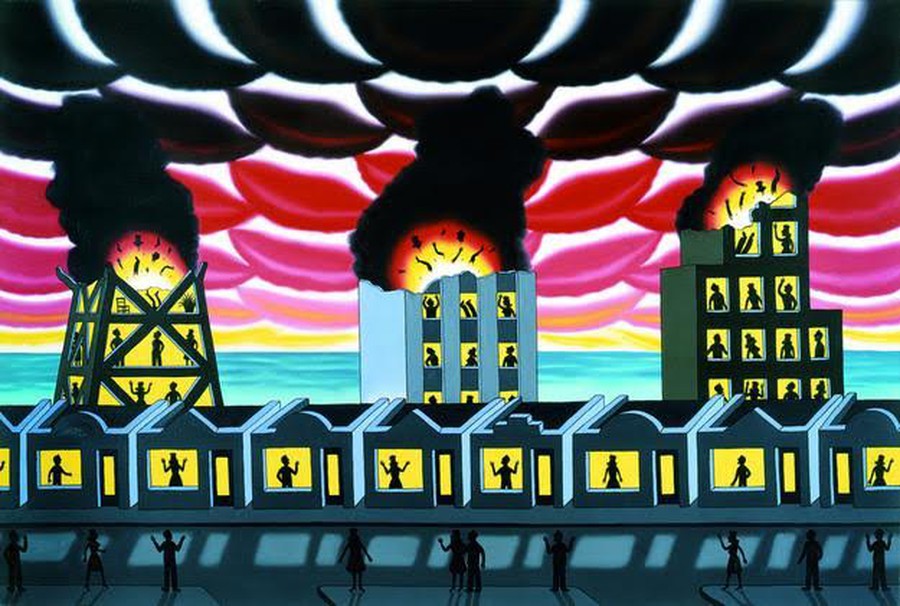 Having just flown from Chicago to New York, I walked into DC Moore Gallery for the first day of my internship only to behold a painting of our beloved city set afire, clouds of smoke and severed limbs oozing from exploded Chicago rooftops.

From mid-June to mid-August, this 22nd Street gallery exhibited the works of Chicago Imagist Roger Brown, a representational artist who got his start at the Hyde Park Arts Center in the late 1960s after receiving both an MBA and MFA from the Art Institute of Chicago. Known for his distinctive yet ominous paintings of cityscapes, silhouettes, and dramatic cloud patterns, Brown is also a recognized sculptor and collector.

The DC Moore Gallery summer exhibition, entitled “Roger Brown: Political Paintings,” featured Brown’s paintings from the years 1983 to 1991. It was the first show dedicated solely to Brown’s political works, many of which—according to the gallery’s director Edward Deluca—had never been exhibited before, even during his lifetime. 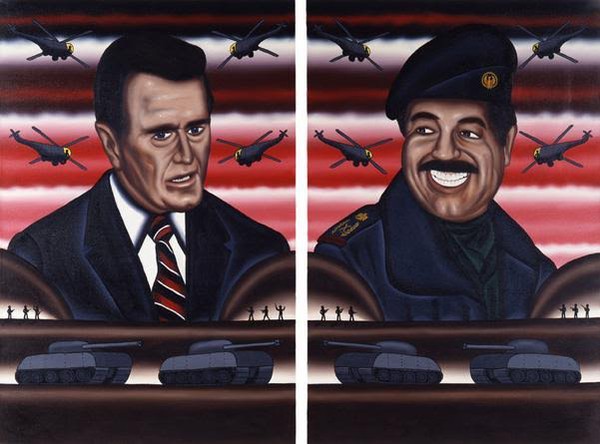 The paintings document Brown’s response to American domestic and foreign policy, social issues, and pop culture throughout this period. He interprets events like the Cold War, the Savings and Loan Crisis, the Gulf War, and the spread of HIV/AIDS. While Brown’s works reflect the honest views of the American everyman living through these events, they do not reveal a particular political affiliation.

The world leaders stand rigid, evenly spaced between shrunken palms before a stormy background. Gorbachev and Bush shake hands in the center and smile towards some invisible viewer, as if posing for a photograph to commemorate a phony victory.

In a similarly mocking manner, Brown’s 1991 diptych Gulf War portrays portraits of George W. Bush (left) and Saddam Hussein (right). The two leaders smirk at one another while toy-like helicopters and tanks hover around their enlarged faces. The exaggerated compositions are reminiscent of WWII propaganda.

“His images have an aspect of the way a comic strip would be developed in terms of the frame and the sequence,” Deluca said. “He tells a small story.”

To tell this story, Brown employs the sideshow banner technique: he includes graphic banners and round buttons marked with bold lettering, all encircled with colorful borders as seen in Aha! Heterosexuals Fuck Too! (1991). This style lends the paintings a self-aware poster effect.

At the same time, several of Brown’s works also express a highly spiritual quality. The 62 x 70” oil painting Illusion (1985), for example, pits half of a man’s skull against its fleshy exterior, both in profile facing opposite directions in front of a harsh, theatrical backdrop. In Oral Robert’s Vision of a Two Mile High Jesus (1984), Brown depicts a ghostly, leviathan silhouette hovering above a row of homogenous buildings while an ant-sized human reaches up towards the sky. These more ambiguous works add depth to the collection of political paintings as a whole.

For more on Roger Brown: The Roger Brown Study Collection, a museum affiliated with the School of the Art Institute of Chicago, is located on North Halstead in the artist’s old home. 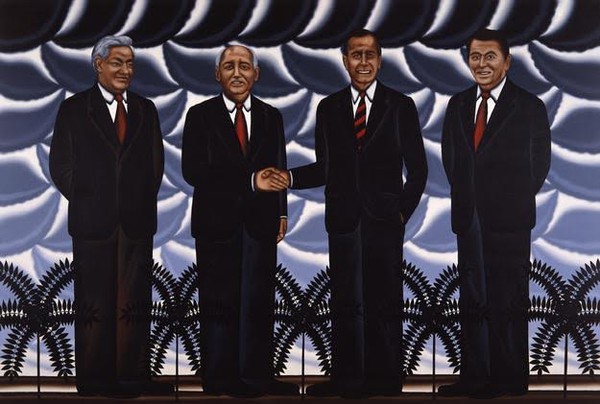