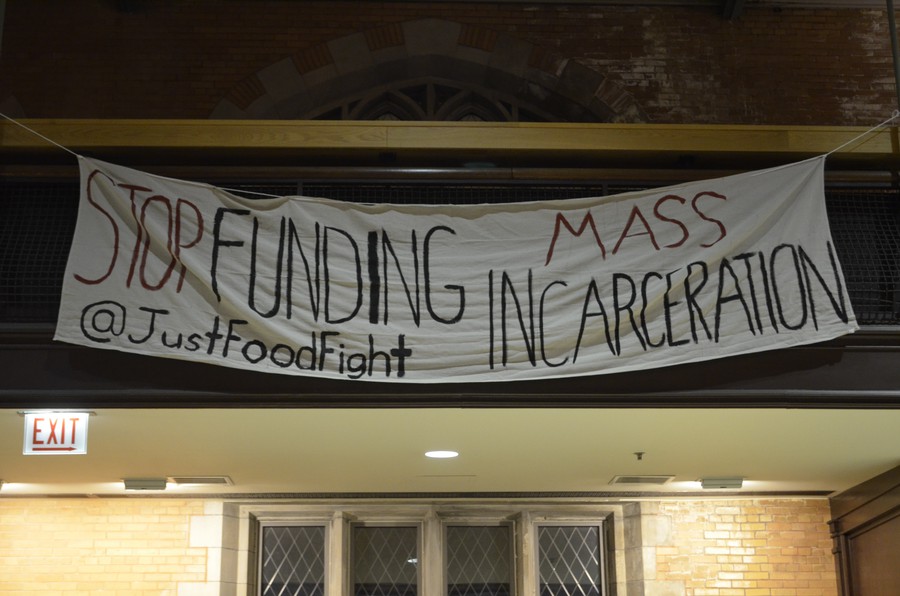 The Fight for Just Food wants the University to cut ties with the multi-billion dollar corporation because of its contracts with prisons across the United States and use an in-house, “self-operating” food service instead. Aramark’s contract to provide food and facilities services, including custodial and maintenance work to the University of Chicago, is set to expire in June.

“Not only do they provide food to prisons, which perpetuates the prison-industrial complex, but they also have a lot of really terrible practices­—like they serve rotten food, there are maggots in the food, there’s food that’s been thrown away,” organization member Natalie Naculich said. “They basically do everything they can to give low-quality food to prisons and make as much money as they can off of these contracts.”

The group’s moveon.org petition also highlights underfeeding of prisoners and contraband smuggling by Aramark employees. In the past, Aramark has been the target of several lawsuits, including by the American Civil Liberties Union. Aramark has come under fire from UChicago students in the past year over faulty and incomplete allergen and nutrition labeling.

The Fight for Just Food’s petition calls for the University to end its contract and proposes a self-operated dining service as an alternative. It also demands that the school guarantee the continued employment of current dining hall workers and allow for transparency and student input throughout the process. The group’s call for the University to abandon Aramark coincides with a broader movement among schools that is increasingly opting to end their contracts in favor of self-operated dining services, including Yale, Harvard, Stanford, and others, many of them for similar ethical reasons.

The group’s banner hanging on Monday was directed at Richard Mason, UChicago’s executive director of dining, whom the group feels has previously been unhelpful. One of the two banners read, “Richard Mason, choose self-operation.” The other read, “Stop funding mass incarceration.”

The University will announce its decision early spring quarter, according to the UChicago Dining page. Until then, the Fight for Just Food will continue its activism, holding weekly meetings and educational events, and a potential town hall meeting with members of the school administration.