The “Most Photogenic War”: The Spanish Civil War and the Aesthetics of Brutality

"I was revolted by how, somewhere between the active manifestation of the affliction and the production of its image, the element of humanity is lost . . ." 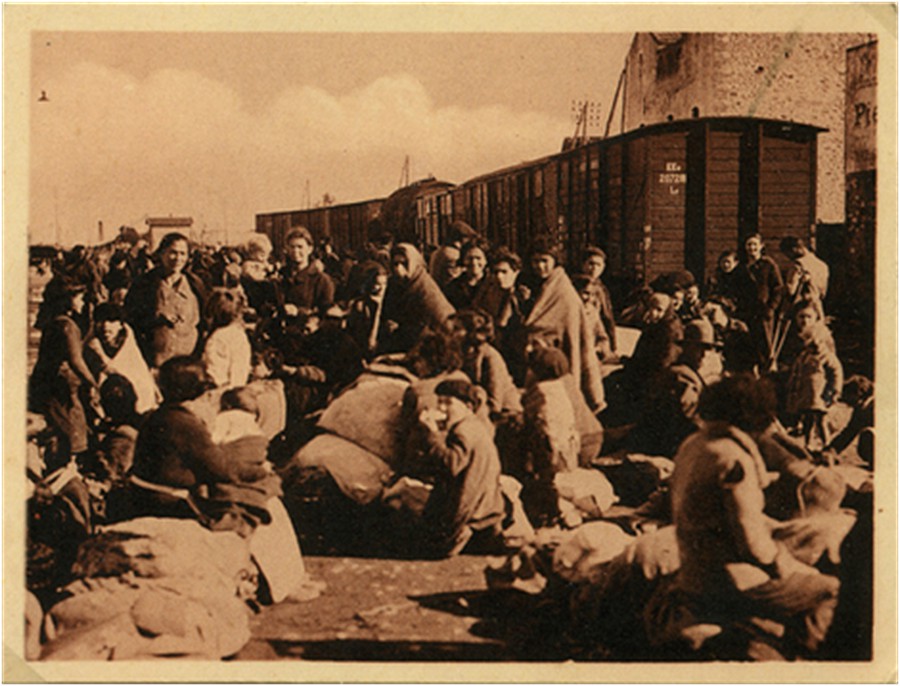 Huddled civilians-turned-exiliados during the Spanish Civil War, which raged across Spain in the late 1930s.

Before beginning to read off his prepared lecture notes, Vicente Sánchez-Biosca issued an unconventional warning to his audience. “Because this is translated, I may miss certain nuances in the language, so my English may sound a little radical,” he said. “But I actually do not mind.”

Sánchez is a professor of film studies at the University of Valencia in Valencia, Spain and the author of many books on film theory and history. From 1992 to 2012, he worked as the editor of the film history journal Archivos de la Filmoteca. Last Tuesday, Sánchez visited the Logan Center to deliver a lecture entitled “The Aura of Atrocity: The Spanish Civil War and the Iconography of Affliction.”

Hosted by the Film Studies Center, this lecture was not principally concerned with the political context of the Spanish Civil War. Rather, Sánchez focused on the ability of the image to convey violence and terror. He discussed how the iconosphere of the Spanish Civil War—in striking a balance of content, composition, and delivery—properly communicates the atrocity of this historic event without succumbing to the banality or obscenity that has often plagues war imagery from WWII to today. Sánchez succinctly captioned this collection of visual media, Republic-funded propaganda, and freelance photojournalistic work as “brutal acts in beautiful pictures.”

The lecture began by observing the common pitfalls of violent imagery that make much of this genre feel “suspicious.” The theatrical nature of staging in photography, the scarcity of imagery in relation to the vastness of the atrocity, and the perception of some violent content as obscene or disgusting all contribute to making a lot of this imagery “too illegitimate to express the magnitude of human pain.” Sánchez’s PowerPoint presentation included plenty of such imagery, ranging from the Auschwitz and Majdanek concentration camps of WWII to prisons used during the Cambodian Genocide to Iraq’s Abu Ghraib prison circa 2003.

As Sánchez flipped through these photos, I noticed my feelings of disgust grow not just in the visceral sense, but also in the artistic sense. I was revolted by how, somewhere between the active manifestation of the affliction and the production of its image, the element of humanity is lost: what meets the eye is a clinical, distanced representation of a disheartening reality.

Since the primary objective of art is communication, it was disappointing to find that these images were not successfully communicating the pain of their subjects nor the magnitude of their circumstances.

So what sets the imagery of the Spanish Civil War—the “brutal acts in beautiful pictures”—apart from the aforementioned examples? Sánchez enthusiastically attempts to offer insight and provide a comparative iconographic analysis of the photography of violence from the Spanish Civil War, conceding that this is “the most photogenic war” he had ever seen.

Firstly, he asserts that the Spanish Civil War was the first war covered by the media in a “modern fashion.” Coverage of this war was defined by a significant amount of freelance journalism as well as the more advanced technology of cameras, allowing journalists to move more freely at the war front. He considers this instance an “idyllic moment in modern photojournalism,” as well as a major shift in the “history of representation.”

The particular nature of the Spanish Civil War also played a role in the formation of this iconography. This was a “new kind of war”—Sánchez noted the “transformation of cities into war fronts.” These circumstances set the scene for new kinds of visual representation.

The repercussions this war had on the civilian population provided new subject matter for visual media, portraying civilians as “protagonists” and introducing an innovative element in violent imagery: heroism. Ordinary people, families, and militiamen were rescued from obscurity and turned into heroes.

Sánchez argued that this heroic representation complements the violent imagery, and this “magic synthesis” of heroism and pain constructs a “protective aura” that preserves the humanity in the image alongside the brutality of violence. Throughout his lecture, Sánchez continued to use the phrase “magic synthesis” to describe the unique aura attached to this iconography. The imagery from this war was so “photogenic” that it would be repurposed into visual propaganda, such as avant-garde posters and postcards.

The nature of these photographs also extended into video. Sánchez presented a film clip from the time that focused on air bombardments, noting the “almost fictional” nature of the stylistic editing, as well as the orchestral music and narrative voice, all of which contribute to forming the same protective aura.

To conclude, Sánchez played a clip of Holocaust imagery, most likely to prompt our reconsideration of violent imagery with a newfound perspective. While the juxtaposition of this obscene imagery with Sánchez’s didactic delivery of his straight-from-the-page conclusion may not have been the best pairing, Sánchez still managed to infuse his infectious passion for iconography into every statement. His lecture provided viewers with a tool for understanding violent imagery both from the past and in today’s world, when our media is inundated with violent video content (police brutality, mass shootings, and ISIS propaganda), and our threshold for what is considered “obscene” is constantly shifting.