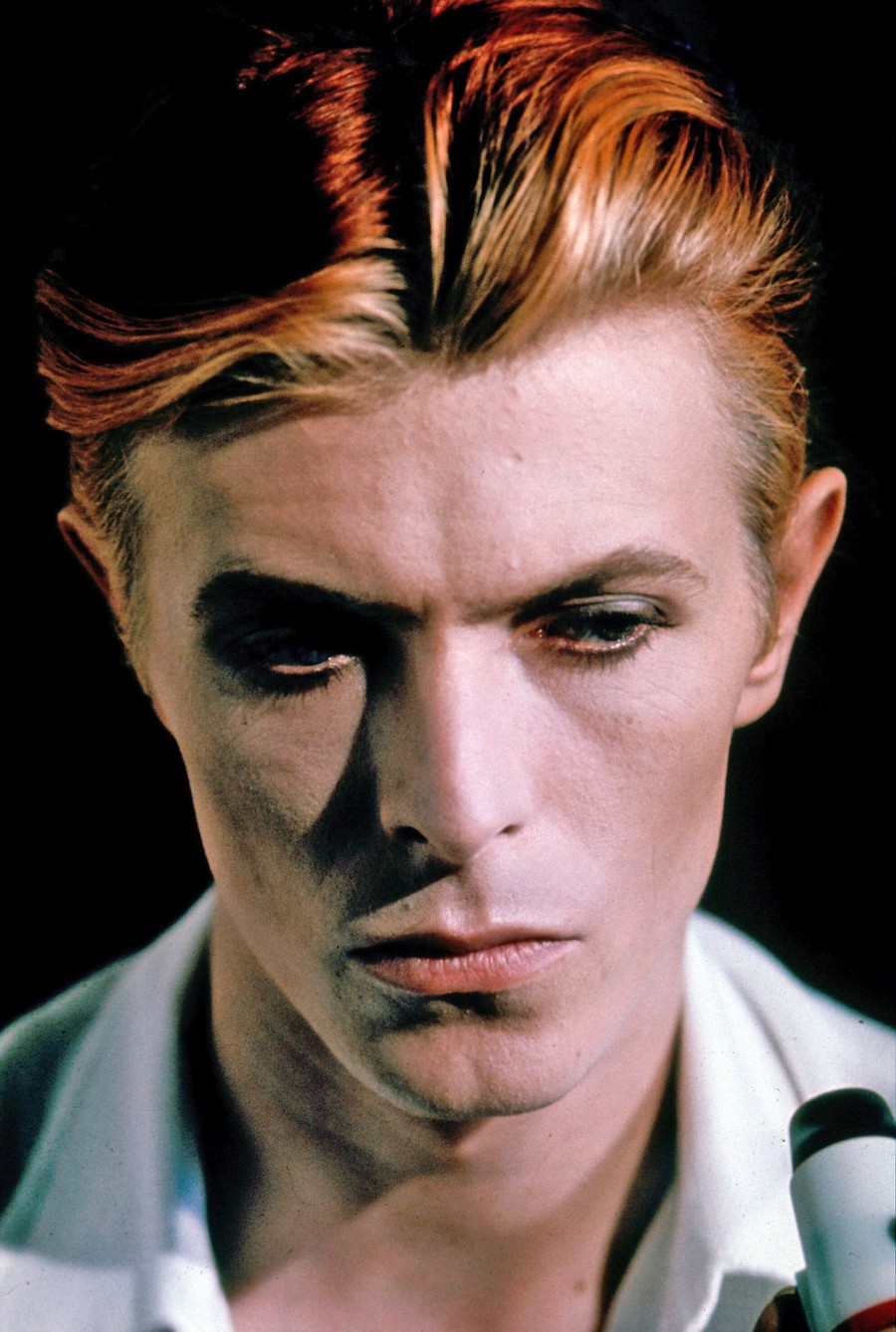 A 1976 promo shot of Bowie from The Man Who Fell to Earth.

It’s as though we hallucinated him. When I think of David Bowie in his Ziggy Stardust days, it seems unfathomable that this pallid creature could have ever really slunk on stage in kimonos or space suits. But there he was, keening about being an alien, swaying against the microphone, going down on Mick Ronson’s guitar.

My dad raised me on a steady diet of classic rock. While I loved the pulsating anger of The Who, the jauntiness of early Beatles, and the melancholy of Bob Dylan, the mythos of Bowie intrigued me most of all. I could spend hours gazing at his heterochromatic eyes, listening to his tremulous vibrato. He made me excited at the prospect of being an artist of any kind; he manifested the pure, unbridled euphoria of constant experimentation. When I listened to The Rise and Fall of Ziggy Stardust on repeat, I wanted to create.

But Bowie wasn’t just Ziggy—his personae shifted from the pageantry of outlandish costumes to sharp suits and slicked-back hair. Some said that Ziggy was only a ploy for attention, a childish need to be transgressive, but I see Bowie’s gradual transformation as an embodiment of gender fluidity. When I was in my early teens, unsure of how I felt about my prescribed femininity, I looked to Bowie’s example (along with  Judith Butler’s and The Rocky Horror Picture Show) as a way to live without inhibitions. Gender expression should not be so narrowly confined to masculine and feminine, and he taught me to embrace gender as performance. Do not simply ignore the chagrin of the traditionalists, he seemed to say. Revel in it.

There was also Bowie the actor, though one could say he was always an actor. In Nicolas Roeg’s The Man Who Fell to Earth, he actually became the alien figure the media often described him as. He was pure luminescence on screen, though with an energy more subdued than on stage. His appearance in the film reminded me that Bowie was, first and foremost, a performer. He was interested in crafting characters; although their voices most often came to him through music, he also embodied an extraterrestrial, a vampire, a goblin king, and Nikola Tesla on screen. Who else had the mystical quality to portray all these souls and more?

When I saw the news of Bowie’s death, I couldn’t sift through my thoughts. If I had been 14 or 15 when this happened, I would have sobbed into my pillow and erected an elaborate, personal funeral for the man I swore I would someday meet. But I’m older now and don’t worship celebrities like I used to. It had been a while since I’d listened to my favorite song of his, “Life on Mars,” so I pulled up the music video, and there he was—gleaming as the camera roamed over his rouged, pouting lips. He looked like a ghostly apparition even when he was alive. I remembered what I loved about him: his ethereality, the sense that if you tried to grab him you would find he was impalpable. A specter.

I walked around the whole day in a daze, listening to “Changes” over and over again, wondering why I had never acknowledged what a good song it is. I thought about the album, Blackstar, that he released two days before his death. Had he waited to go until after he had brought one last piece of artwork into the world?

I like to think he did. I like to think that his last act was an artistic flourish, a final brandish of the hand in the grand performance art of his life.