Chicago Goes 1–1 on the Road 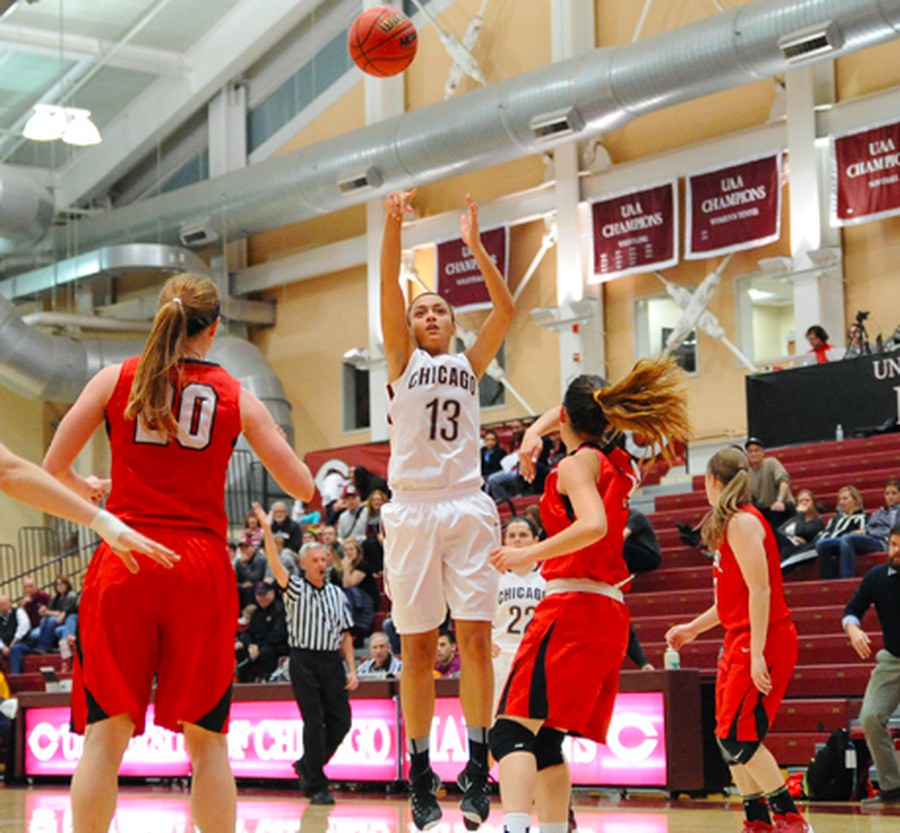 The Maroons had a busy weekend as they hit the road to take on a duo of UAA opponents. First, the team hopped on a plane to Pittsburgh where on Friday they faced the No. 21 Tartans from Carnegie Mellon. Both teams were on fire all night, but in the end Chicago fell in heartbreaking fashion by a margin of 83–80. Then, after a long bus ride to Cleveland, the squad took on Case Western Reserve. In this contest, the Maroons were dominant throughout, securing a 67–58 victory. With these results, the Chicago squad moves to 9–5 on the year and 1–2 in UAA action.

In the game against Carnegie, the Maroons got off to a quick start, scoring 22 points in the first quarter and allowing just 16 points. This was a welcomed change from their previous game against Washington University where the team found itself in an early hole. It was apparent that the coaches had stressed the importance of starting strong, and the team responded well. This was especially true for fourth-year guard Caitlin Moore who scored 10 points during the first period, including two bombs from beyond the three-point arc.

But, the Tartans didn’t go away, and by halftime the score was knotted up. From this point on, the teams were neck-and-neck. Carnegie Mellon relied on efficiency, as it shot 49 percent from the field and a remarkable 80 percent from the free throw line on 26 attempts. On the other hand, Chicago answered with a stout post presence and deadly accuracy from long range. More than half of the Maroons’ points were scored in the

paint, often by slashing guards like third-year Stephanie Anderson and second-year Elizabeth Nye. The team also managed to make 40 percent of shots from the three-point range, which helped it keep up with its opponents’ steady offensive production.

At the end of the day, the Maroons found themselves on the losing end of a hard-fought game. Anderson finished with 17 points and six assists, each of which was a team-leading total. Her backcourt defense was also a strong point as she managed to swipe four steals.  Nye and Moore also put up strong performances, banking 15 and 14 points respectively. As a whole, Chicago did a great job of taking care of the ball, turning it over just 12 times. Unfortunately, at the final buzzer, this all wasn’t enough.

“It was nice to get off to a good start against Carnegie,” Anderson said. “As a whole, the team played with great energy all game. But, at the same time, we didn’t come out ahead so there’s definitely more work to be done.”

Just two days later, the Maroons squared off against the Spartans of Case, who also were looking for their first UAA win. The second quarter proved to be the difference in this contest as Chicago netted 21 points while allowing its opponents to score just nine. In fact, the Maroons’ defense held strong throughout the afternoon, holding the Spartans to just a 33 percent shooting. The squad also managed to force 23 turnovers, including 15 steals. With this win the Maroons secured their first UAA victory of the season.

2 from behind the arc. She also played pesky defense, harassing the opposing point guard and stealing the ball three times. Katie Anderson swished her own pair of long-range treys to add to her scoring total. She finished with eight points to go along with a team-high of four assists.

After the game, Stephanie Anderson said, “It’s always nice when you can beat a conference opponent. Hopefully we can use the momentum from this win as we continue our UAA schedule.”

“We still have a lot to work on, so this week of practice is going to be very important too,” she added.

This weekend, the Maroons return home for the first time since fall quarter to face two more conference opponents. Chicago is set to host No. 4 NYU on Friday and then Brandeis on Sunday. The NYU Violets are the highest ranked team in the UAA, but recently suffered their first loss of the season. Last year, Chicago beat NYU on both occasions, so the squad will look to feed off of this recent success. The Maroons tip off against the Violets at 6 p.m. this Friday at the Gerald Ratner Athletics Center.