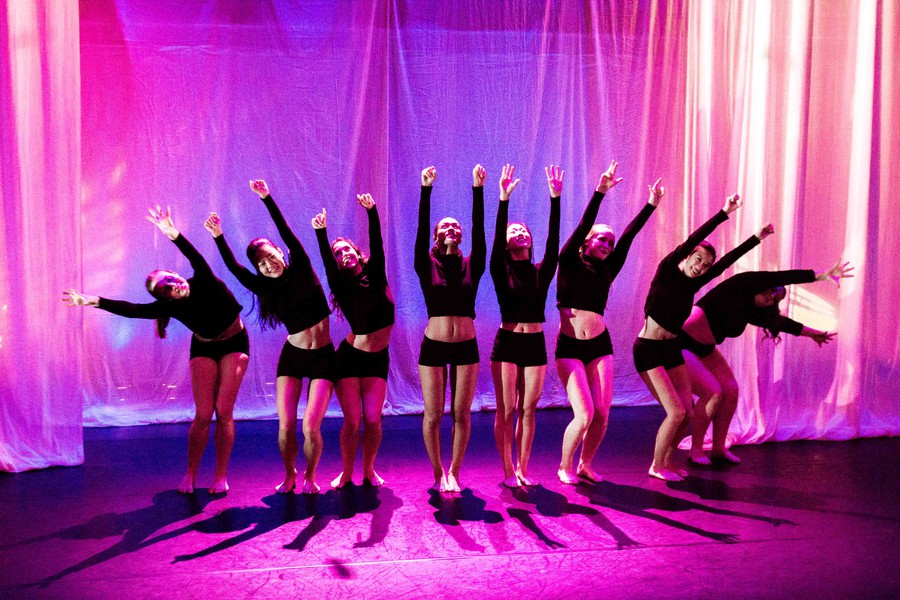 Palms pressed together, heads thrown back, and bathed in hazy purple light—the scene was almost one of reverence. Standing in concentric circles with arms outstretched and faces lifted to the ceiling, the dancers formed a human lotus flower.

The sold-out Saturday matinee was off to a late start as the dancers scrambled to shimmy into their costumes offstage. The steep incline of the seats ensured that everyone had an unencumbered view of the stage, which was bathed in pink light and featured white linens draped from the upper level balcony. Theater West itself became a kaleidoscope as light reflected off the small circular mirror fragments suspended from the ceiling.

The lights finally began to dim and six dancers—five female and one male—pattered onstage for the first piece, clad in gauzy white tunics. Fluid and rounded, the constant spin of limbs and bodies matched the dreamy melody of Sara Bareilles’s “Kaleidoscope Heart.” Once the piece was finished, the next one began without missing a beat. The mood changed immediately: the music became tense, the motions sharp and writhing, the costumes fitted and metallic. The shift was disorienting and changed again as quickly as it had started, morphing into an upbeat Passion Pit song with dancers scampering joyously across the stage.

Initially off-putting, the organic rotation of pieces, styles, and costumes elegantly interlaced each of the three sections to carry the kaleidoscope motif throughout the entire show. The dancers came together as a whole company for the very last number, outfitted in the spectrum of costumes from earlier pieces. Even as the costumes changed, certain elements remained the same or reappeared in different pairings.

But the innovative routines were what truly brought the show to light. Though arranged by several students, the choreography explored the continuity of change. Dancers rolled over each other on the floor, wrapped themselves around banisters, cartwheeled across the stage, and skipped hand-in-hand. The incorporation of group lifts and a multi-level pyramid added variety, each dancer always part of a larger whole. The most direct nod to the kaleidoscope theme was the recurring technique of coming together and breaking apart—bodies constantly rearranging.

However, the sudden transitions occasionally left things rushed and unpolished. Costume changes sometimes occurred on the edge of the stage as dancers hurried to their places. The almost frenetic pace could be overwhelming: in the rush to be in their spots, dancers tripped over each other or came close to bumping into each other.

An hour of nonstop motion later, the dancers reconvened at the center of the stage. The dancers—palm-to-palm with their neighbors, backs arched—executed the final spin of the kaleidoscope. The audience, which had been vocal throughout the performance, slowly got to its feet in a standing ovation. The lights dimmed, and the dancers fled the stage before returning for a bow as an ensemble.

Mesmerizing and always surprising, UChicago Maya’s winter showcase was a dazzling exploration of the constancy of change and the fluctuating relationship between the individual and the group.