Woodlawn Church to be Demolished amidst Protests 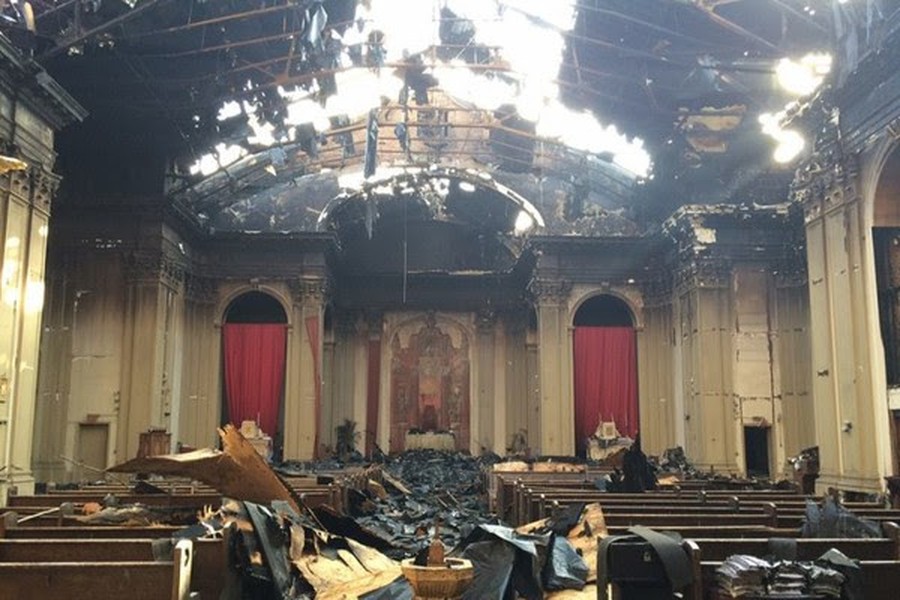 Shrine of Christ the King church will be demolished following damage from a fire in October.

In the first week of January, the Archdiocese of Chicago filed a petition to demolish the Shrine of Christ the King church on 64th Street and Woodlawn Avenue, which was ravaged by a fire that broke out last October after improperly-stored rags spontaneously combusted.

“The loss of the Shrine of Christ the King is upsetting and a disappointment to the Archdiocese, the people who worship there and the Woodlawn community,” Susan Burritt, spokesperson for the Archdiocese of Chicago, said. “However, we value life and safety above all else and will proceed with those priorities guiding our actions.”

The Archdiocese received approval from the Commission of Chicago Landmarks to demolish the building on January 6. If they secure the approval of the City of Chicago Department of Buildings, then they will move forward with the plans for demolition.

“At the news of the impending demolition, people are sad and disappointed, but hopeful that the Shrine’s mission of Catholic faith and charity will continue for the benefit of this local community,” Canon Michael Talarico said over email.

Some members of the community feel that the Archdiocese did not provide the necessary comfort and support in this time of tragedy. “One might think that a reaction from your hierarchy and administration would be one of support in the moment of disaster—meeting with the community, with the faithful, show of solidarity—none of that happened. Instead, the Archdiocese unpleasantly surprised everybody by applying for a demolition permit,” UChicago art history grad student and church parishioner, Anatole Upart said.

Some members of the church and neighborhood community are still trying to save their place of worship. Upart explained that many members of the congregation have created the Coalition to Save the Shrine, a group made up of what their GoFundMe page describes as “preservationists, parishioners, and community members” in favor of repairing the church. This group has reached out to local leaders including 20th district Alderman Willie Cochran, whose signature is needed before the demolition is approved.

The community has also raised almost $70,000 for repairs, but this money went to the Institute of Christ the King, the international umbrella organization that runs over a dozen churches in the U.S. and Italy, rather than community organizers.

“There are always viable alternatives to pulling a plug on a Historic Landmark,” Upart said in an e-mail. “[The] community has asked Archdiocese to delay demolition to allow time for a serious proposal to be drawn up and funds raised.” Various alternative solutions to demolition have been proposed, including a community center with religious components.

“Discussions have been and are ongoing with the Archdiocese of Chicago leadership,” Talarico said. “Options are being examined and discussed carefully.”

The building is meaningful not just to those who worship there, but also the community at large, according to Upart. As he explained, the 92-year-old Shrine of Christ the King church is a reminder of Woodlawn’s days of prosperity and a source of pride for the community to this day.

“It gives people hope for a better Woodlawn, it draws people to the area, and that also allowed other businesses to partake in a revitalization of the neighborhood,” Upart said. “To stifle all that would be a crime.”

The Archdiocese maintains that demolition is the safest and best option for this structure. “The urgency and time-line for this effort have been driven by concerns for safety after the building was deemed to be “imminently dangerous and hazardous” by the City of Chicago,” Burritt said.

Since the fire “Attendance at Masses and programs has been very good as ever,” Talarico said. “The aftermath of the fire has been a positive opportunity to develop even stronger relationships between the members of the congregation and the local community.” The church has been holding services in the gym of the First Presbyterian Church of Chicago, a space volunteers transformed into a “beautiful chapel," according to Talarico.

For now, though, the community is staying strong in this trying time, according to Upart. “On one hand, the people have come together in this moment of disaster, became stronger, yet on the other hand the uncertainty of the future weighs heavy on everyone’s minds.”