Art or Artifice? For Indie Pop Duo, It’s Up in the Cloudz

"But when 150 people are splayed out in front of him, staring at him, waiting for him to confess—how could he possibly allow himself to be that vulnerable?" 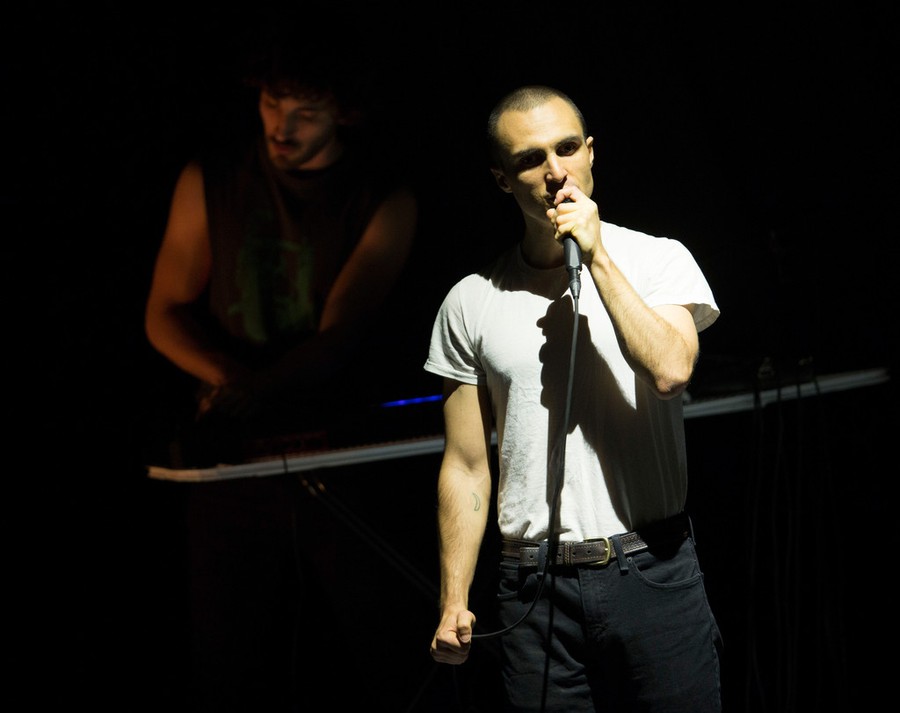 One of my friends has persistent boy problems, and her problems can always be solved by being honest with the boy in question. I was thinking about how hard it is for her to be candid as I took the train to Schubas Tavern to see Majical Cloudz, a band whose heart is firmly stuck on their sleeves—a band that makes openness seem like the most natural state in the world. “Just tell him how you feel,” I always say to my friend, but she never does.

Majical Cloudz comprises Matthew Otto (producer) and Devon Welsh (vocals), and they’re from Montreal. Their music is what Lou Reed once called “maximalist minimalism.” Although there aren’t a lot of notes or beats, the synthetically-created organ notes are sustained for maximum expression; the overall effect is similar to Martin Hannett’s spacious production for Joy Division, albeit much warmer. Otto’s music provides the foundation for Welsh’s vocal melodies: his voice soars over the music the way seagulls glide over the ocean, or the way Steven Morrissey sings “Puuuhnctuuured biiicycleee.”

For two people who look ridiculously intimidating in photos—Welsh is bald with strikingly dark eyes and brows, while Otto has hollows where most people have cheeks and a well-kept version of Rasputin’s beard—Majical Cloudz was nothing more than slightly awkward in real life. I had a hunch the intensely personal nature of Welsh’s lyrics made the non-musical interactions between the band and audience more awkward than usual, like changing the subject from something heavy.

At 9:15, Welsh and Otto snaked their way through the crowd and arrived onstage. Otto’s equipment was set up on an ironing board. Welsh gave a long-winded pre-show introduction (“Thanks for coming out…. Yeah…. Um.”) before Otto queued up “Disappeared” from Are You Alone?.

“Disappeared” begins “Those that forever disappear/ All I want is for you to talk to me/ The way you used to do.” With the hushed piano chords and the gravitas of Welsh’s voice, the words felt like imparted secrets, as though Welsh knew giving voice to these private feelings was taboo, but was compelled to blurt them out anyway.

Most of Welsh’s lyrics are just as unnervingly honest and plainspoken as the opening verse from “Disappeared.” In “Downtown” he sings, “It just feels good being in your arms.” From “Silver Car Crash”: “I am afraid of love.”

Throughout Majical Cloudz’s set, I marveled at Welsh’s willingness to expose himself for the sake of human connection. I was blown away by his honesty and by the bravery I saw in its execution. Putting those lyrics on a record is one thing; it’s possible to abstract the consumer, to not think about the audience as Mike, the man who listens to Are You Alone? as he drives to work, or as Miriam, the girl listening to “Downtown” as she falls asleep. But when 150 people are splayed out in front of him, staring at him, waiting for him to confess—how could he possibly allow himself to be that vulnerable?

But that’s what Welsh did. He twitched like he was being electrocuted, and his stage banter was straight out of a Michael Cera movie (“I feel like I have something to say, but I don’t”), but he sang the living shit out of those songs. Fuck, he was even making eye contact—I locked eyes with him right as he sang, “Do you hear what I’m saying, or not at all?”

I heard him. We were effortlessly connected.

After the show, I bought Are You Alone? and headed over to Otto to ask him to sign it. He was in a conversation with a girl and her boyfriend. The girl said something along the lines of “Thanks for the show, and I was honored to have witnessed your first pee break.” (After Majical Cloudz finished “If You’re Lonely,” Otto announced that he “really had to pee,” that “this has never happened to me before,” and then dashed offstage, leaving Welsh to make hugely uncomfortable smal talk with the audience.)

Otto giggled uncomfortably and replied, “That wasn’t actually the first time I’d had to stop the show for a pee.” The girl smiled and he continued, “I think it was my second or third… Yeah, after I announced I had to pee, Devon turned around and looked at me like, ‘Again? Really?’”

I stopped still. Otto’s white lie meant what I’d just witnessed wasn’t an outpouring of unmitigated human emotion; it wasn’t someone lowering their defenses for the noble purpose of true connection. He lied to make the moment feel special, to make us think we were witnessing something unusual. Or maybe he lied because he was embarrassed—maybe he nervous pisses all the time, and he didn’t want the audience to know how bad his stage fright gets. Maybe he lied because he thought it was funnier that way.

And that’s how I came to realize that for all of their soul-baring, Majical Cloudz were still performers, and performers don’t necessarily bare their souls. They never do.