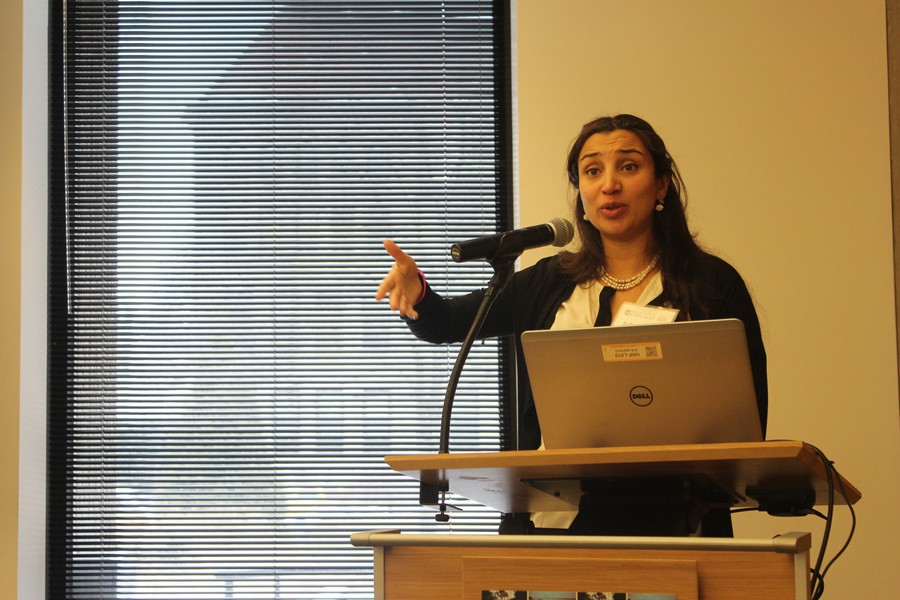 The daylong event began with a keynote speech by Dr. Rohini Haar, a 2005 graduate of the University’s Pritzker Medical School. Her speech was followed by six Q&A panels with interns and professors.

She then discussed tensions between private and public health, saying that although it is ideal to provide every patient with as much care as possible, doctors often have to think about how much medicine is available to allocate to each person.

Haar also admitted that despite feeling uncomfortable at times, she has to treat every patient equally. “I remember treating one guy who shot six people just because they were driving red cars. It was frustrating to treat this person who just killed six people, but it’s my job as a physician,” she said.

Haar discussed her own research on crowd control weapons and attacks on healthcare locations as a means of suppressing people. She said that doing research can influence governments to form stronger policies.

“Science and health take on a different research capacity from political science…. And so merging all of this research together makes your political argument stronger,” she said.

After the keynote and a short break, the group broke into separate rooms to listen to human rights workers elaborate on their different fields of study. The six panel topics were “Health and Human Rights,” “Refugees and Immigrants in the U.S.,” “Refugees in the Middle East,” “Race and Gender,” “Food, Habitat, and Environment,” and “Justice.”

During the panel sessions, many students in the College elaborated on their own experiences with human rights internships they had this past summer.

Fourth-year Ellen Jacobs, who worked at the U.S. Department of State’s Bureau of Population, Refugees, and Migration, spoke about the ongoing refugee crisis in the Unites States. “There’s a gap between what happens to refugees in camps versus what happens when they are resettled in the U.S.,” she said.

Fellow fourth-year Christina Leon also spoke about the refugee crisis and said that her internship at the Committee for Hispanic Children and Families in New York allowed her to “help draft policies that would force the government to meet immigrants needs.”

Between sessions, students spoke with the panelists and professors from the Pozen Center, which offers internships for those who are interested in pursuing careers in human rights.

Gzesh was pleased that the Pozen Center was able to organize another symposium to help students apply for human rights internships. “We’re so happy to bring it back and to see not only new students, but students who got internships from it the first time around come back,” she said.