Spektral's "Minty-Fresh" Album is Anything but Serious 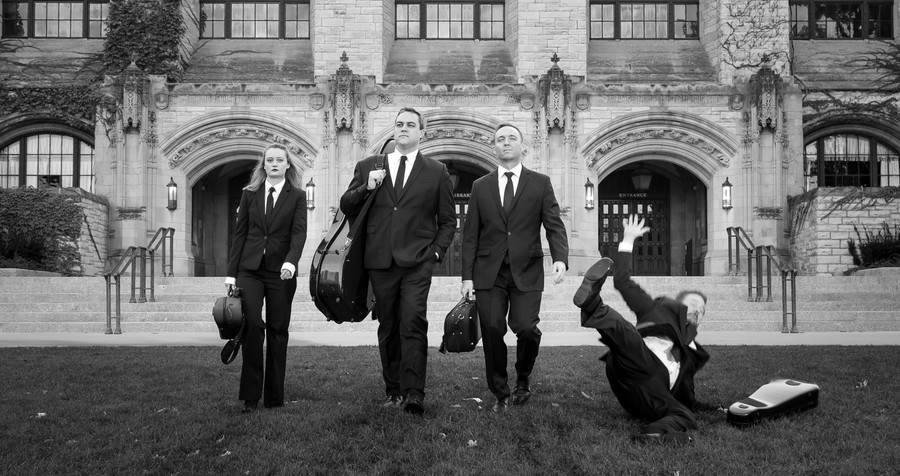 There are very few parallels to be drawn between the classical concert hall and the comedy club—that is, until now.

The Chicago-based Spektral Quartet’s newest album, Serious Business, has finally found a way to make classical music laugh-out-loud funny. The album features four humorous tracks that span centuries; three are world premieres written within the last two years while the final track is by 18th-century composer Joseph Haydn. Yet all four pieces were written with humor in mind.

Chicago-based performer Chris Fisher-Lochhead’s “Hack,” the inspiration for the album, captures the pitch, cadence, and harmonic content of the voices of such comedians as Sarah Silverman, Dave Chappelle, and Robin Williams.

“Chris wanted to write us a piece in which the music of comedians’ deliveries would form the launch-point for the material,” explained Spektral violist Doyle Armbrust. “Capturing the [tendencies] of the human voice is profoundly difficult, but Chris is just the kind of artist to take on such a Sisyphean task… It’s infrequently the joke itself that gets the laugh—listening to a friend unsuccessfully recount a comedic bit is testament to this—but the delivery, which is what Chris harnesses so effectively.”

Though “Hack” was the catalyst for Serious Business, the quartet soon realized that two of their other commissions—David Reminick’s “The Ancestral Mousetrap” and Sky Macklay’s “Many Many Cadences”—were also riddled with humor.

“The Ancestral Mousetrap” features the macabre poetry of Russell Edson as the libretto, with all four members of the ensemble singing in harmony against their own instrumental lines. Like the work of all great comedians, the humor in Reminick’s piece proved to be thought-provoking for listeners and musicians alike.

“The thing about singing and playing in a piece like Dave [Reminick’s] is that the music is constantly creative, moving through different textures and harmonies,” second violinist Austin Wulliman said. “As a musician, you have to be able to command your best instrumental technique as one layer, and create a compelling vocal performance at the same time. That double-duty was an incredible challenge to my musicianship and interpretive imagination.”

The third new piece on the album, “Many Many Cadences,” moves at a breakneck tempo: the piece consists entirely of the conclusion of cadences from the top range of the quartet in a rhythmic frenzy.

“We played this for a fairly traditional audience at Fermilab…and had the over-60 segment of the crowd cackling,” Armbrust said.

Given that three-quarters of the album is new music, it initially seemed odd that Spektral chose to include a piece by one of the most quintessential composers for string quartet, Joseph Haydn. However, his String Quartet No. 2 (Op. 33) is nicknamed “The Joke.”

According to Armbrust, the inclusion of Haydn is also in keeping with the quartet’s mission to “bring the works of the past into conversation with the pieces being written today” and “to dispel the concert hall binary of new vs. old.”

Spektral’s album may be entitled Serious Business, but in actuality it encompasses anything but the austere classical stereotype. Filled with music that is new and old, classical and comedic, it is boundary-defying in every way.

“Leaping between the skill sets necessary for each of these four pieces, or any concert we program, is what keeps the experience minty-fresh for us,” Armbrust said. “We love that composers venerate the string quartet and write so energetically for it.”

The Spektral Quartet will celebrate the new album with release parties at Maynes Stage on Friday, January 29 at 8 p.m. and at the Logan Center on Sunday, January 31 at 3 p.m.