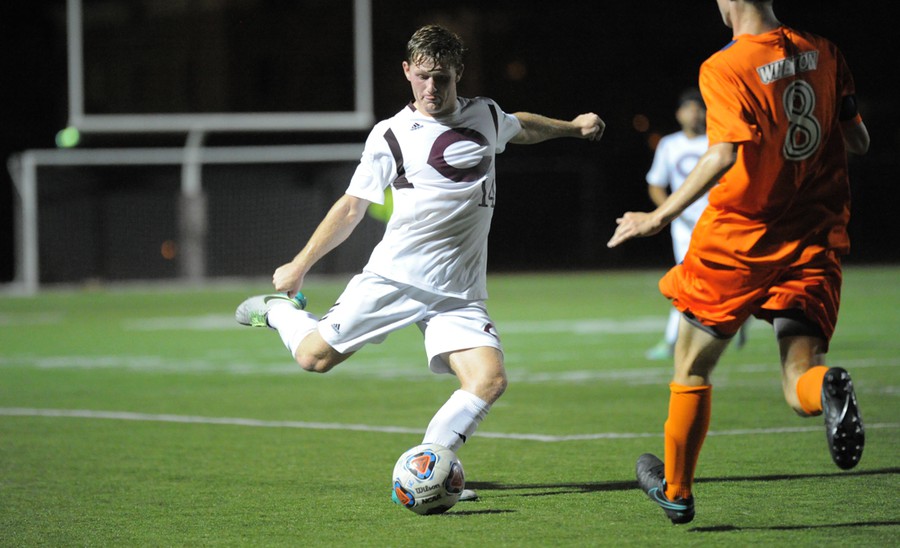 Nate Johnson attempts to chip the ball to his teammate.

The men’s soccer team defeated No. 4 Rochester 2–1 in front of a season-high 284 fans at Stagg Field on Saturday, improving to 12–0–0 on the year and earning the No. 1 national ranking. The loss was the first of the season for the Yellowjackets, who now stand at 7–1–2.

Although UChicago and its fans went home victorious, the game did not start off on a great note, with the Maroons down 1–0 when Rochester forward Jeff Greblick converted from close range in the 16th minute.

However, rather than losing morale from the early deficit, the team remained positive following the goal. “We weren’t really that fazed. It was a slight obstacle we had to overcome but it wasn’t anything insurmountable,” said first-year forward Dayo Adeosun. “As an overall team we’re clicking in pretty much all aspects, so when we went down 1–0, it was really just a wakeup call…it motivated us to play even better.”

It took until the second half for the home team to eventually break through. In the 54th minute, first-year midfielder Nate Johnson collected the ball just outside the penalty box and passed to fourth-year defender D.J. Weiss, who flicked it with his head to first-year defender Sam Drablos for the goal.

The Maroons then quickly pressed their advantage and scored their second goal just over a minute later when Adeosun found Johnson again, who managed to find the top corner on a first-time strike from 22 yards out. Both the goal and the assist were the firsts of Johnson’s collegiate career and came in just his fifth start for the Maroons.

“Immediately after we scored that first goal we were already thinking ahead to score the next,” said Adeosun, who now has five goals and two assists this season. “That’s why I decided to turn on my defender and start attacking immediately and then Nate decided to attack and as a team we really just connected in that moment.”

Rochester pressed for an equalizing goal in the closing stages of the game, but the Maroons managed to weather the storm and hold on for the win.

“I did what I could and I guess what I had to do,” said third-year goalkeeper Hill Bonin. “But, I give most of the credit to the four or five defenders right in front of me who had fantastic games against…one of, if not the best, strikers in the UAA [in Jeff Greblick].”

When asked about his takeaways from the game, Bonin said he valued the way the team played more than the actual result. “I think for a couple games we got caught up where our passing wasn’t so good or we tried to press too much and got countered for it,” said Bonin, whose two saves both came in the second half. “This was a game against a really good team where we were able to spend the week fine-tuning some things and making sure we were prepared and we really got after them and played in a way that they struggled to do anything about”.

The Maroons’ next opponents are the Brandeis Judges, who they will play this Friday at Stagg Field. Kickoff is scheduled for 5:30 p.m.