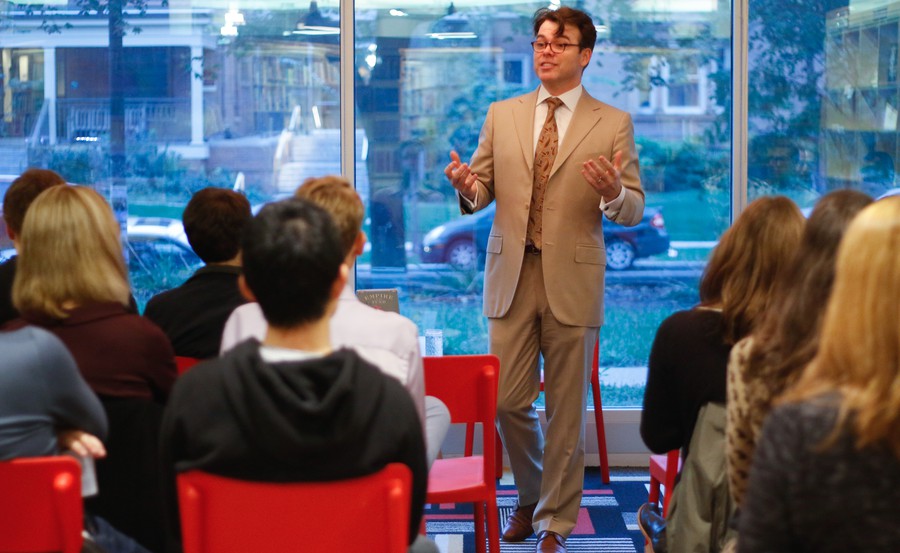 William Birdthistle discusses his book Empire of the Fund: The Way We Save Now on Oct. 10 in the Seminary Co-op.

A distinguished scholar of corporate law and investment funds examined the way Americans save money at a talk on campus Monday.

William Birdthistle, Professor of Law at Chicago-Kent College of Law, spoke at the Seminary Co-Op Bookstore on Monday about his latest book, Empire of the Fund.

He began with an overview of how Americans save now. With demise of the pension and diminishing returns from our social security, personal saving has become the last source of incomes for our retirement, he said.

So, what’s wrong with the way we save now? Birdthistle said that Americans normally put their personal savings into mutual funds in hopes of receiving a decent rate of return when they retire.

Birdthistle said there are three major problems with that approach.

First, he said the structure of the mutual fund industry is flawed. “Most mutual funds compensate their advisers by giving a certain percentage of the money they are managing,” he said, “but simply adding more people (and more money) into the fund doesn’t make you, the individual investor, any richer.” The incentive is misplaced, he said.

Second, he said individuals are not good at making the right investment decisions. Birdthistle noted that it is difficult for individuals to decide upon the amount of money they should save and the best person to manage their money.

Third, the fund managers can work against the interests of the investors. Birdthistle described various tricks played upon the investors as “the dark testimony to human creativity,” saying that “people can use your money under their care for their own benefit.”

Turning to solutions, Birdthistle suggested the audience choose the fund that charges the smallest fees. He also discussed the advantages and challenges of alternative investment options, such as money market funds, exchange-traded funds, and target date funds.

Yet the best and simplest suggestion Birdthistle gave is to keep an eye on investments. “You just put the money in and you don’t worry about it anymore, and if it doesn’t work in the way that you think is going to, you will be in a horrible surprise,” Birdthistle said. “That’s what happened in 2008.”

After the talk, Birdthistle took questions from the audience. During the Q&A, he touched on the disparities in different countries’ saving systems, and the role of government regulation in finance. Birdthistle said he became aware of the huge risks of the system when he worked as a corporate lawyer. “Over the course of the few weeks, during the boot training camp, [I learned] all the amazing ways people accuse the mutual funds of swindling.”

His book is currently available for purchase at the Seminary Co-Op Bookstore.