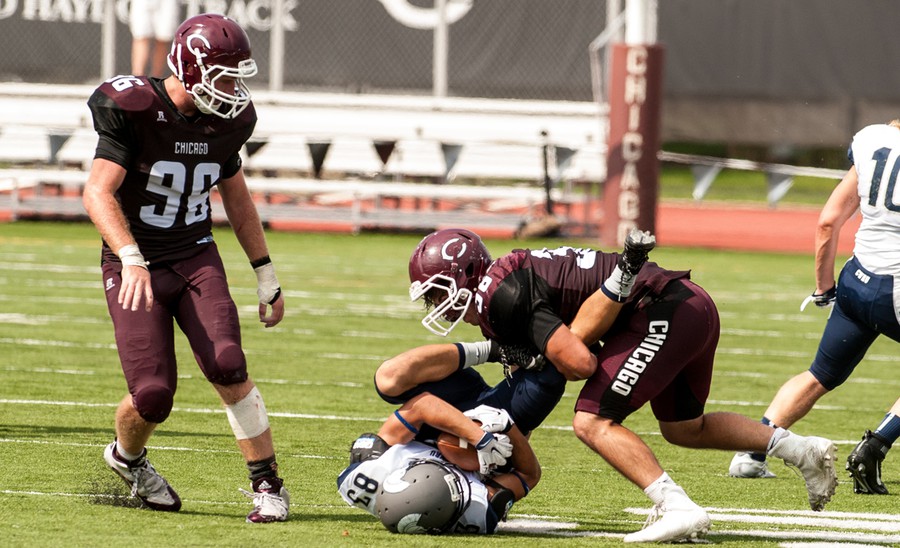 The Maroons will be back in Chicago this Saturday, looking for a homecoming win against conference foe Rhodes College. Chicago is coming off a tough road loss at Berry, where the Maroons held a 14–0 halftime advantage before ultimately dropping the contest 28–21. However, while the squad did lose the game, there were many positives that the players plan to take into their game against the Lynx this weekend.

For instance, fourth-year quarterback Burke Moser broke the school record for attempts and completions, going 43 of 76 in the game. He also threw for 383 yards. This was the third straight game Moser has gone for more than 300 yards through the air. The Maroons would like to continue this trend against Rhodes, who gave up 429 passing yards last week, which translated to the Lynx forfeiting 56 points as well as 210 rushing yards.

The South Siders are looking to break .500 after falling back to 2–2 in conference play, while the Lynx are looking to improve their 1–2 record in Southern Athletic Association (SAA) play. After this game, the Maroons will then go on the road to visit Hendrix and Sewanee, making the importance of picking up a huge win on homecoming weekend even greater.

“It’s a pretty big game to help us get back on track. It’ll be good to get a home win now, because we don’t have another home game for three weeks. Protecting our home turf is a big deal for us. We take pride in protecting Stagg Field,” said first-year defensive lineman Ben Christiansen.

So far, the Lynx and the Maroons have had one common opponent, the Berry Vikings. While Chicago was able to play the Vikings close on the road, only losing by seven points, Rhodes did not fare quite so well. The Lynx lost a home game 34–10 to Berry in their first SAA game, which bodes well for the South Siders.

While Rhodes’s record has not been overly impressive, the Lynx have had some offensive success. The squad averages 287 yards through the air, 169 yards on the ground, and 27 points per game. The Maroons have been hard at work this week to be prepared for the Lynx’s fast pace offense.

“They have a really talented offense with some fast athletes that work extremely well in their high tempo offense. We are practicing with a high intensity and preparing every day like it is the real game,” Christiansen said.

In trying to stop this offensive threat, the squad will look to improve a defense that has had a bend but not break attitude all year. The Maroons have given up an average of 34.4 points per game, and an average of over 500 yards allowed per game. Despite this, the Maroons have been able to get some big stops and win some high scoring games.

While this weekend’s game will be a tough test, Chicago will have the help of the largest expected crowd this season. Stagg Field has also been kind to the team, as it has been host to the team’s two wins and has not yet seen a loss. The Maroons will kick off on Saturday, October 15, at 1:30 p.m. for their Homecoming Weekend game.