Axelrod: Only ‘Anti-Clintonism' Can Hold Republican Party Together 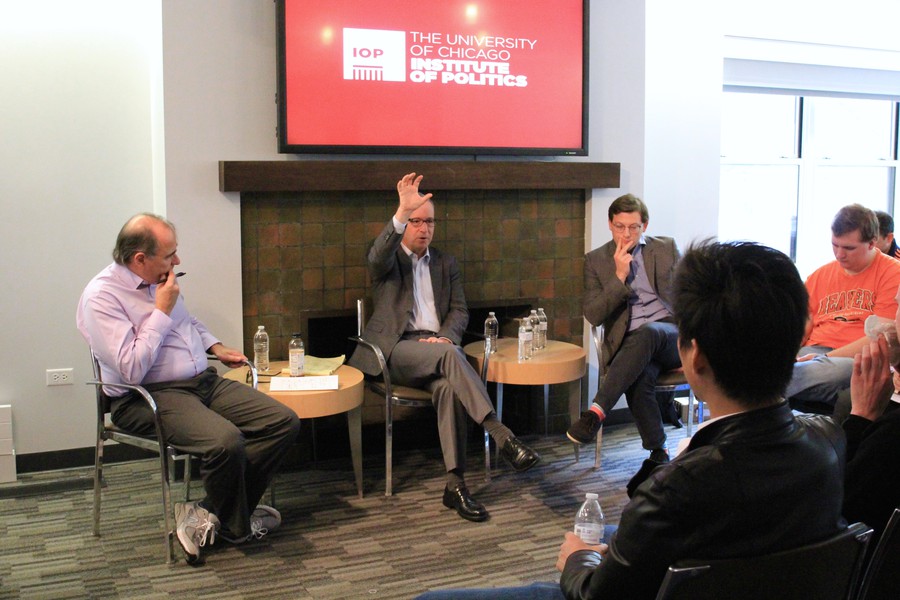 David Axelrod sat down with a panel on Tuesday in the IOP’s living room to discuss the electoral trends that gave rise to Donald Trump’s candidacy.

The panel featured Editorial Director of The Atlantic, Ron Brownstein, and Dan Wagner, CEO of Civis Analytics, a data science startup, who worked as the Chief Analytics Officer for President Obama’s 2012 campaign.

Brownstein framed Trump’s candidacy as an unsurprising outgrowth of long-standing trends. He emphasized the demographic revolution that has dramatically changed the electorate over the past twenty years, especially the rapidly expanding minority vote. “It was one thing to lose 80 percent of [minority] voters when they were 10 percent of the electorate; it’s another thing when they’re 30 percent,” Brownstein said.

He argued that the political parties have undergone a “class inversion.” It used to be that the Democrats worked with their hands, and Republicans wore suits, he said. But since the ’60s, the Democratic Party has increasingly represented wealthy, college-educated voters. The panel agreed that Trump is the product of blue-collar white frustration.

“He is speaking every one of their fears, anxieties, legitimate needs, and resentments,” Brownstein said. “Every single one.”

Brownstein said Trump’s support begins and ends with blue-collar whites; he risks becoming the first Republican in sixty years not to win a majority of white voters with college degrees. Brownstein summed up the race in two sentences: “Donald Trump has consolidated the blue collar wing of the Republican party. The white collar wing remains fragmented.”

Axelrod echoed Brownstein’s description of a fragmented party. “The one thing that’s held the Republican party together in the last eight years has been ‘anti-Obamaism,’ and I think now more than ever the one thing that will hold the party together until they resolve this is ‘anti-Clintonism,’ which portends a really difficult four years,” Axelrod said.

Axelrod turned to Wagner (A.B. ’05), who quipped that his UChicago education taught him more about the classics than analysis of voter data.

“I did the econometrics sequence, so I went into the world with an incredible lack of real or practical skills that could be applied, but my knowledge of Max Weber and Karl Marx and Adam Smith was deep and profound,” Wagner said.

But he went on that the predictive analytics he has developed to maximize campaign resources were, in fact, “all anchored in stuff that I learned here.”

Wagner broke down the limitations of polling, saying that polls are skewed in this election because so many registered Republicans are opting out. “If someone self-identifies as a Republican in this election, they are probably extremely conservative,” Wagner said.

Axelrod asked Wagner, almost as an afterthought, who he predicted would win. Wagner replied, “Oh, Hillary’s going to win by a lot. There’s not much debate about it.”

Wagner said his confidence about Democrats taking the White House does not extend to Congress. Even though in the past decade voters have tended to vote within one party down the ballot, with only around 10 percent splitting their ticket in the last election, Wagner foresees an uptick in split tickets, as moderate Republicans begrudgingly vote Clinton.

Asked how he felt watching Trump’s demagogic candidacy play out, Axelrod replied, “The fact that this election has turned into essentially a reality show is dispiriting, but the history of republics is replete with down moments where democracy looked tawdry and challenged, and we lived through that, and I suspect, partly because of [you students], we will live through this as well.”