Discovery of Radiocarbon Dating in Kent Is Now a Landmark

The discovery is the 80th National Historic Chemical Landmark. 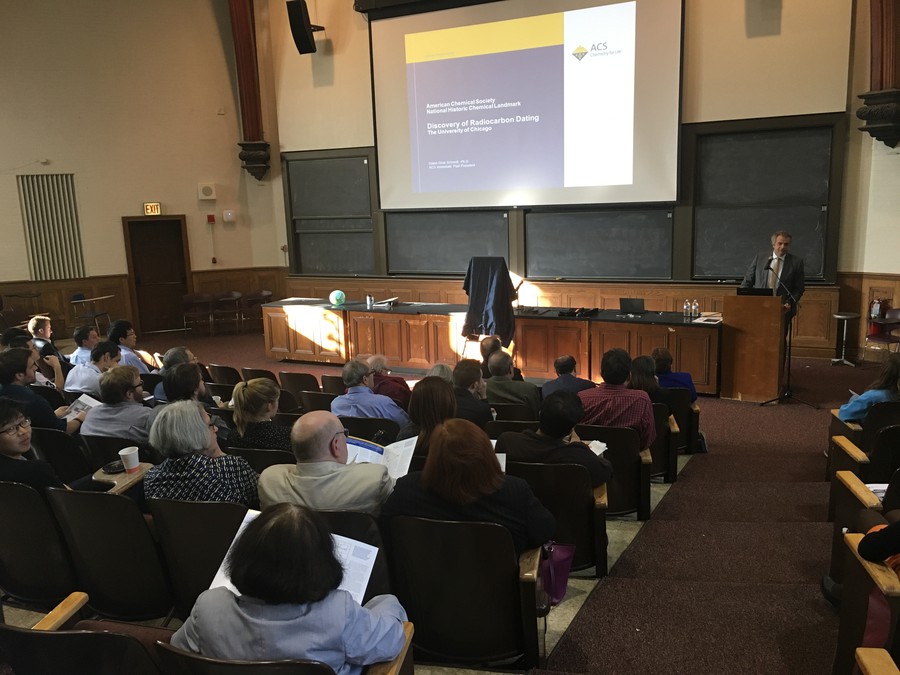 Provost Daniel Diermeier speaks to the crowd at the unveiling of Kent Laboratory as a National Historic Chemistry Landmark.

A professor’s discovery of radiocarbon dating in 1946 was designated as a National Historic Chemical Landmark on Monday.

The dedication took place at Kent Chemical Laboratory, the building in which professor Willard F. Libby made the discovery that would earn him the 1960 Nobel Prize in Chemistry.

Radiocarbon dating, a method proposed by Libby, is used to date organic material by measuring the amount of carbon-14, a radioactive isotope of carbon. The discovery is the 80th National Historic Chemical Landmark to be designated by the American Chemical Society (ACS).

According to Diane Grob Schmidt, the immediate past president of the ACS, every subject submitted for landmark consideration must fulfill three criteria: it must be more than 25 years old, it must represent a “seminal achievement” in chemistry, and it must have a significant contribution to society.

As she presented the plaque, Schmidt said that beyond fulfilling the criteria, Libby’s work is “a fantastic example of the transforming power of chemistry” because of its profound effects on not only areas of study but also “on ourselves” by providing a fuller understanding of our past.

In his opening remarks during the program, Provost Daniel Diermeier highlighted the importance of Libby’s work.

“The word groundbreaking is used so often that it sometimes has lost its meaning but in today’s event, it is marking a development, the development of radiocarbon dating, [for which] the word groundbreaking is both appropriate and non-hyperbolic,” said Diermeier. “What professor Libby discovered here at the Kent Chemical Laboratories is important much as to the field of chemistry, but continues to have profound effects for our understanding in a whole variety of different areas, obviously archaeology, geology, paleontology, and fundamentally how we view the long history of human civilization.”