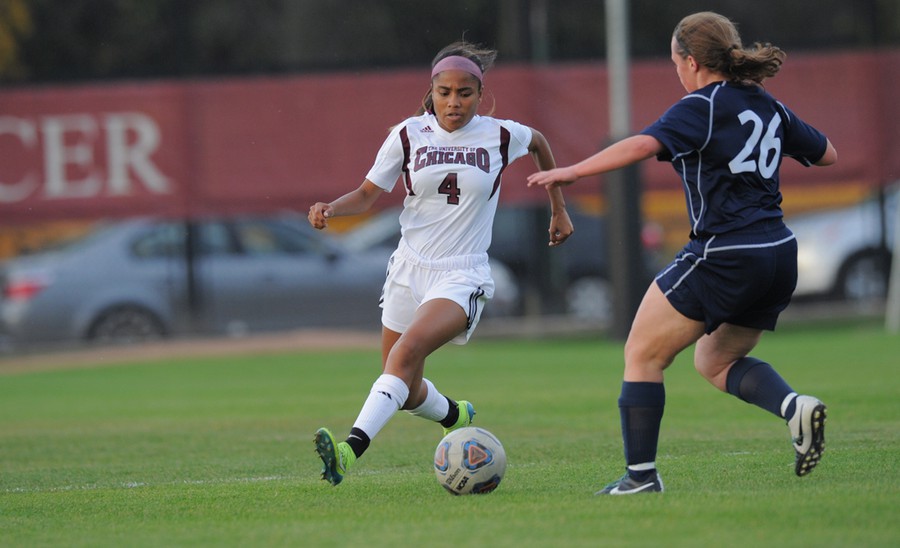 Second-year defender Sydney Mathis runs the ball past a defender.

The No. 7 Maroons toppled No. 8 Brandeis at home on Stagg Field by a final score of 2–1. In first-half play, the Maroons fired from all cylinders, ending with a total of nine shots on goal, but they could not seem to find the back of the net. Brandeis also had two shots on goal in the first half, but failed to capitalize on either one.

After a tough fought battle throughout the first half, the Maroons opened up the second with two quick goals: one by third-year Kaitlin Price in the 51st minute and one by second-year Jenna McKinney in the 67th minute.

.The Judges did not go down without a fight, as third-year midfielder Haliana Burhans scored off of an assist from Hannah Maatalah in the 73rd minute. Fortunately for the Maroons, first-year goalkeeper Katie Donovan and the defense prevented Brandeis from scoring the rest of the game. With the win over the previously undefeated Brandeis squad, the No. 11 Maroons improved to No. 8 in the Dlll rankings. Even with the jump in rankings, the squad still had to put away an unranked opponent just two days later, and stakes were especially high as it was Senior Day, where the squad was to honor their three fourth-years.

On Sunday, October 16, the squad challenged New York University (NYU) at home on Senior Day. After suffering a loss from Carnegie Mellon on October 8th and tying Wash U 0–0 on October 14, the 7–3–3 Violets arrived in Chicago to dethrone the Maroons, but they could not come away with a win. NYU challenged the team with eight shots on goal, but could not put the ball in the net. As for the home team, the Maroons finished with an astounding 19 shots on goal and 13 corner kicks, proving their dominance throughout the game.

Third-year Madori Spiker capitalized on a cross from second-year Jenna McKinney, scoring the first goal in the 24th minute. After maintaining possession for most of the first half and the beginning of the second half, powerhouse midfielder McKinney scored on an extraordinary chip shot that deflected off of NYU’s goalkeeper Cassie Steinberg and landed in the back of the net.

Third-year Mia Calamari, who is the Chicago record-holder of assists in a season and is No. 2 for assists in a career with 28, was the contributor to this goal. After the game, Price commented on the Maroons’ hard-fought performance when she said, “It felt great to get a win on Senior Day! The seniors are so important to us on and off the field, so everyone was willing to do whatever was needed to get them a win.”

Price emphasized the importance for the women’s soccer team to stay consistent with its play and move on to each team with the same mindset: to win the conference. When asked about the team’s goals for the rest of the season, Price stated, “Our team goals have been the same all year. Be the hardest working team and find a way to win together.”

If the Maroons continue their success on the field, they are going to do it together. The squad is looking to keep their playoff and conference title hopes alive as they continue through the rest of their season. Their next game is Thursday, October 20 at 3:30 p.m. versus Illinois Tech on Stagg Field. They will also take on Concordia, WI, this weekend on Sunday at 1 p.m. to round out the weekend of competition.