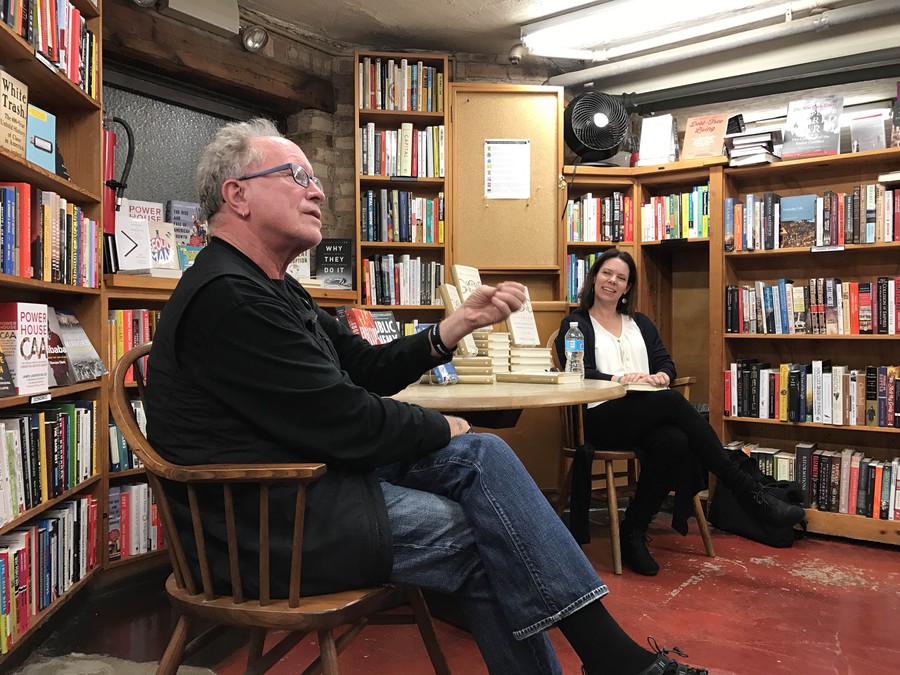 Vivian He / The Chicago Maroon

Katherine Ozment, an award-winning journalist and author of newly published book Grace Without God: The Search for Meaning, Purpose, and Belonging in a Secular Age, sat down for a conversation on Wednesday at 57th Street Books on how nonreligious Americans fill the void of religious rituals and teachings when they leave an organized religion.

She spoke with Bill Ayers, a Hyde Park–based teacher and political activist. Ozment began the night by recounting an exchange that inspired this book.

This conversation took place between Ozment and her son on the morning of Good Friday, when her son witnessed Greek Orthodox ritual processions outside a nearby church. Ozment’s son wondered why they never participate in similar rituals, to which Ozment replied it was because they were not Greek Orthodox. Her young son followed up with the question above, and Ozment’s spontaneous reply prompted her to the inquiries that pervade Grace Without God.

Ozment, as a secular mother of three children, grapples with questions such as how do people fill their secular lives with spiritual depth and substantial purpose, without the church or God? How do people approach questions about their place of being in the cosmic order? And how should people explain to their children concepts of love, virtue, and destiny?

Twenty percent of Americans were religiously unaffiliated in 2012, and by now, it has risen to 25, Ozment said. That number guaranteed a rich group of subjects for her to study, and Ozment shared with the audience both thought-provoking and touching episodes in her observance of nonreligious communities and families across the country.

In one instance, Ozment attended a welcoming ceremony for her friend’s newborn child. The mother of the child was raised Catholic and the father Muslim, but both have left their faiths. The ceremony did not adhere to any religious traditions, but included both the Muslim grandmother and the Catholic grandmothers giving prayers and blessings in their respective religions. “That was more meaningful than any baptism I’ve ever attended,” the Catholic grandfather said afterwards.

For Ozment, that ceremony is an epitome of a way of life for which she has been searching: secularity and spirituality in innovative dialogues.

An audience member asked about the possibility of an atheist president for America down the line. Ozment smiled and acknowledged the relatively small role religion has played in this election thus far. Ayers asked Ozment whether there is a trend towards secularization and if the trend is in fact accelerating.

“Well, I will say that millennials are something else,” Ozment replied.