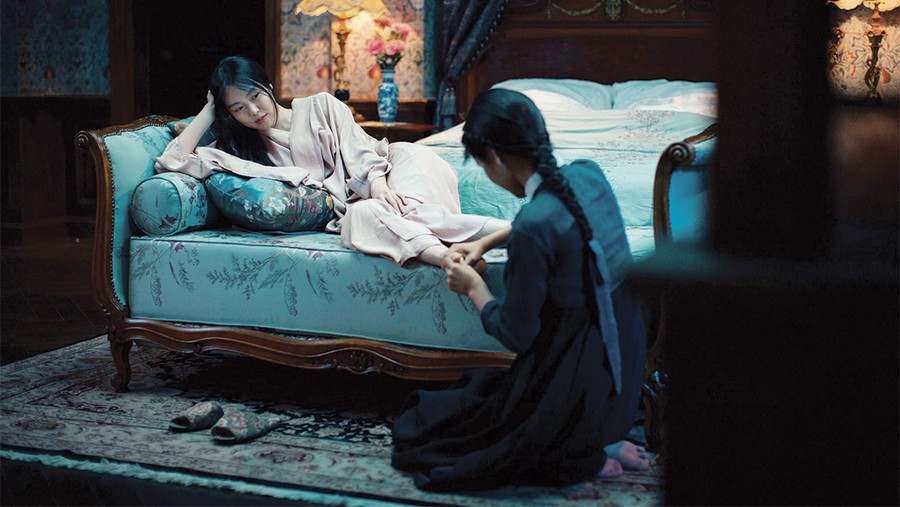 Check out Kenneth’s running coverage of high-profile films screened at the Chicago International Film Festival. His fourth review of the series tackles Park Chan-wook's The Handmaiden.

The Handmaiden is a South Korean drama adaptation of the Welsh novel Fingersmith by Sarah Waters, directed by Park Chan-wook. Park is one of South Korea’s most acclaimed filmmakers, garnering commercial and critical success in South Korea in 2000 with Joint Security Area and then winning the Grand Prix at the Cannes Film Festival for Oldboy (2003) and the Jury Prize for Thirst (2009). The Handmaiden premiered in competition at this year’s Cannes Film Festival.

Back in his forgery workshop, con man Count Fujiwara (Ha Jung-woo) teaches pickpocket Sook-hee (Kim Tae-ri) how to stun with flattery. Fujiwara looks in a mirror, puts on an exaggerated face, and bellows, with excessive stammering, “Spellbindingly beautiful!” Later in the film, during a steamy lovemaking scene, a shaken and romantically enraptured Sook-hee slips out the same phrase with the same affectation—this time, in earnest. The phrase is used by Fujiwara throughout the film as a subtle verbal motif. Yet when uttered by Sook-hee, it takes on a heightened essence: In the most unexpected of circumstances, she has discovered the actual meaning of “spellbinding beauty.” In many similar ways, Park Chan-wook’s erotic psychological thriller The Handmaiden is also spellbindingly beautiful (stuttering optional).

However, this phrase alone does not properly capture the experience of the film: The Handmaiden is also extravagant, overwhelming, cheeky, even sybaritic. Executed with tremendous flair, Park tells a story of a pair of con artists who attempt to swindle Japanese heiress Lady Hideko (Kim Min-hee) by courting her into marriage with Fujiwara, then shortly committing her into a mental asylum. The scam becomes painfully difficult for Sook-hee—who goes undercover as Lady Hideko’s handmaiden—once the two women develop romantic feelings for each other. And yet, this summary only begins to describe the first act of Park’s narrative. As the film plays around with chronological order and plot exposition, it uncovers outrageous and scandalous developments that leave heads spinning. The Handmaiden constantly flirts with excess, but by the end of the third act it’s totally worth it.

Speaking of luridness, Park’s handling of the more sexual elements of The Handmaiden raises the issue of gratuitous nudity:  Its sex scenes seem to readily indulge the male gaze.  By oversaturating the traditional roles of men in his film, Park at once sabotages them through stereotypes and exposes the gender dynamics of East Asian cinema and literature. One of the film’s central themes, after all, is the prospect of subversion in the performance of gender and sex in culture. So in that sense, the indulgence of the male gaze in The Handmaiden is perhaps one of conscious and purposeful exploitation.

Near the end of the film, one of the female protagonists cross-dresses in a train station to avoid lesbian suspicions. As she and her lover laugh and make light of their ridiculous situation, the viewer gets the notion that the humor is informed not just by their circumstances—immediate or throughout the film—but, in a self-referential sense, also by the absurdity of gender and sexuality in all its cinematic forms. All things considered, The Handmaiden is a trove of lush visual and narrative metaphors that give viewers plenty to think about, as they watch scenes so erotic, so graphic, and so fervently passionate they give Kechiche’s Blue is the Warmest Color a run for its money. You’ve been warned.

The Handmaiden runs 145 minutes in Korean with English subtitles. It will screen October 23 at 8:15 p.m. and October 25 at 8:30 p.m. Individual tickets and festival passes are available online at chicagofilmfestival.com.

Barry Jenkins and Tarell McCraney of "Moonlight" expand on the film's themes of race, sexuality, and gender.