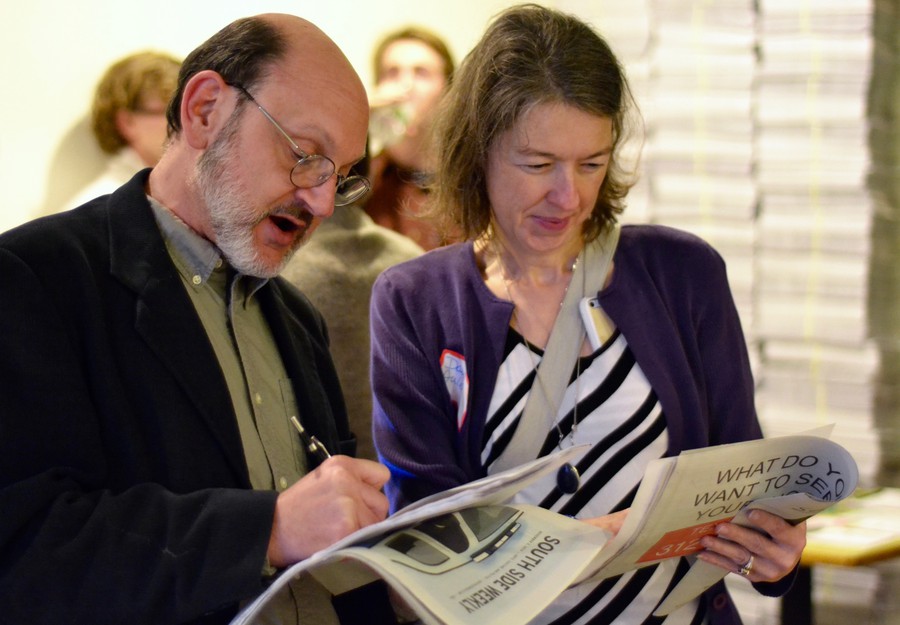 Hyde Park community members mingle and work on a Chicago trivia contest at the Public Newsroom Launch Party hosted on Oct. 20 by the City Bureau and the South Side Weekly at the Experimental Station on 61st and Dorchester.

On Thursday evening in the Experimental Station, City Bureau, a civic journalism organization, partnered with South Side Weekly to open the Public Newsroom, a public hub for community reporting.

While City Bureau was founded last October, Thursday marked the launch of its Public Newsroom, a weekly gathering in the Experimental Station that invites the public to participate in and produce community-centric journalism.

City Bureau has been drumming up support for its cause over the past year. A Kickstarter campaign this August raised over $13,000 to support the Public Newsroom.

“What we really wanted to do was to show that people will support the media that’s in their best interest,” said Darryl Holliday, editorial Director and co-founder of City Bureau. The news organization focuses on community-centric reporting on the South and West sides and hopes to provide experience to budding journalists. Professional journalists work with reporters with a wide range of experience to generate story ideas and report on local issues. Outlets such as the Chicago Reader and DNAinfo have co-published past City Bureau stories. Every Thursday, the Public Newsroom will provide a space for the public to contribute and collaborate. Every other week, guest presenters—academics, activists, and journalists—will lead workshops.

Michael Reed, a senior at Kenwood Academy High School, attended Thursday’s newsroom launch after participating in a City Bureau orientation meeting last week. While Reed writes for his school paper, he was also drawn to City Bureau. “It’s a chance to receive more training and get my work published,” Reed said.

“We are constantly finding ways to have a reporter be out in the field informing people and being informed by people,” Holliday said.

City Bureau also operates a “documenters program” that pays community members to gather information at community functions such as town halls and police board meetings.

Despite having no experience in journalism, Maurice Todd, 21, of the Austin neighborhood, made the trip to Experimental Station on Thursday. “I was curious about the whole public newsroom concept,” said Todd. “There’s nothing on the newsstands with anything like this.” Fourth-year and Editor-in-Chief of South Side Weekly Jake Bittle, said City Bureau and the Weekly have a “mutually-beneficial relationship” that will only strengthen as City Bureau further establishes itself in the Experimental Station.

“[The space] facilitates an interaction between the two organizations that I don’t think would be possible otherwise, and since both organizations are in a sense teaching organizations, it’s really helpful to be able to talk with like-minded people who are doing similar work,” Bittle said.

“Certainly on the editorial side, we’re going to continue to work with City Bureau on bigger and more ambitious reporting projects,” he said, mentioning that the two organizations will likely work together on local community reporting.

The Experimental Station, a multipurpose community center on East 61st Street and South Blackstone Avenue, will host City Bureau’s Public Newsroom. The Weekly moved into Experimental Station in the summer of 2015. It will also be home to a soon-to-open café.

On Thursday evening, the building was bustling. “Tonight is a huge step in the direction of [City Bureau’s] mission,” said Andrea Hart, education director of City Bureau. “This [space] is the crowning jewel. It can really be an innovative place where the community can come in to create. It is very much a communal space, and it feels like it’s a real community.”

The first Public Newsroom is next Thursday from 3–8 p.m. Poet and sociologist Eve Ewing will lead a workshop on November 3. All events are open to the public.