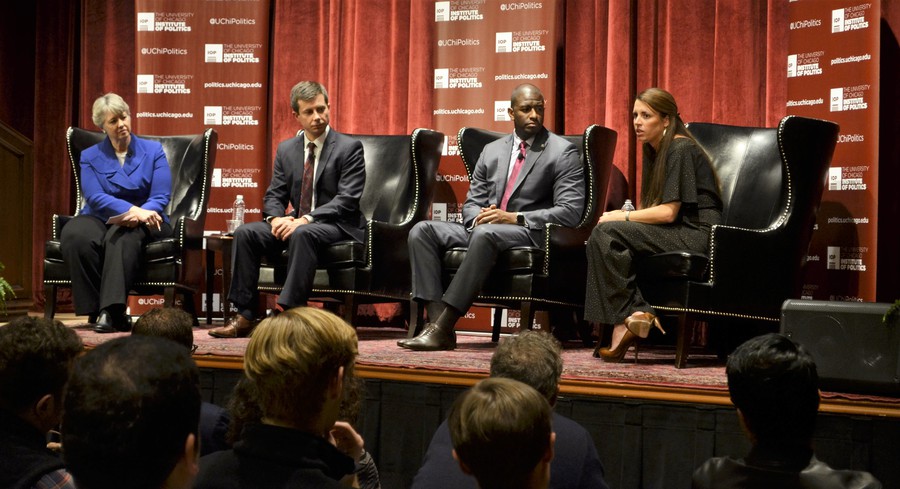 Three young mayors spoke about the challenges city governments face as part of a panel hosted by the Institute of Politics at International House on Thursday.

The panel was moderated by Annise Parker, the former Democratic mayor of Houston, Texas. It included Pete Buttigieg, age 34, of South Bend, Indiana; Andrew Gillum, age 37, of Tallahassee, Florida; and Blair Milo, age 33, of La Porte, Indiana. Buttigieg and Gillum are Democrats; Milo is a Republican.

The panelists first discussed the distinction between tasks clearly within their domain and issues they care about but influence only indirectly. They cited education, public health, and economic development as causes that deeply motivate them, but as Parker noted, “Mayors are the public face of their cities. If I asked them what the most important thing any city in the world provides, they’d know the answer, and that’s fresh water. Second most important thing is they take it away [for drainage]. Third most important thing is we pick up the trash. And it’s not sexy. But it’s necessary.”

“Particularly coming after the Ferguson incidents, we had different sides of our town that experienced my city differently... We had a survey done, and 90 percent of the people said that they feel safe in our city,” he said, before describing two teenage boys he met who said their mother did not allow them to sleep in beds for fear of them being shot straight through the window. Gillum’s efforts to combat this “disparate experience,” he said, have centered on conversations between residents of different neighborhoods.

They also stressed that local government is complex, rewarding work—“harder and better” than he had imagined, Buttigieg said, emphasizing mayors’ immediate, constant responsibility to their constituents.

His perception of the role, he said, has transformed dramatically since running for office. “To the extent that I cared about politics [before running for office], I thought it was all about the national picture. That was the big league, where the serious people went.”

Parker responded, “Now you know the serious people are in the cities.”