More Than 50 Counterprotesters Show Up at Westboro Church Picket

The Westboro Church picketers and the counterprotesters stood on opposite sides of 55th Street.

Nine picketers from the Westboro Baptist Church faced opposition from counterprotesters this Friday. The Church was on campus to protest the University’s policies toward transgender people, particularly its gender-neutral housing and lists of bathroom options for campus buildings. 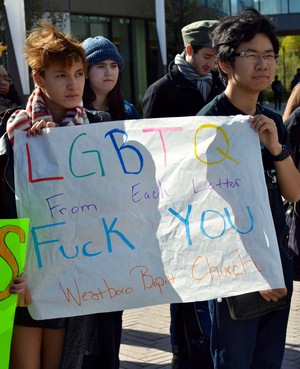 Giovanna DeCastro / The Chicago Maroon
At around 11:30 a.m., the Westboro picketers arrived at the intersection of  55th Street and University Ave, standing across from the recently completed Campus North Residential Commons.

Holding signs reading “Repent or perish” and “Why did God destroy Sodom?” among others, the picketers sang along to versions of pop songs including “Burning Down the House” by Talking Heads with the lyrics changed to reflect Church messages.

On the opposite side of the street from the Church picketers, more than 50 counterprotesters gathered with signs of their own. The counterprotesters included students from UChicago and other nearby institutions including Columbia College Chicago and the Lutheran School of Theology at Chicago. Members of an organization called the Revolutionary Communist Party (RCP), a group calling for the immediate overthrow of the U.S. government, also participated in the counterprotest and brought a megaphone which they shared with students. The counterprotesters held signs carrying messages including “Trans lives matter” and “God loves, hate kills.” 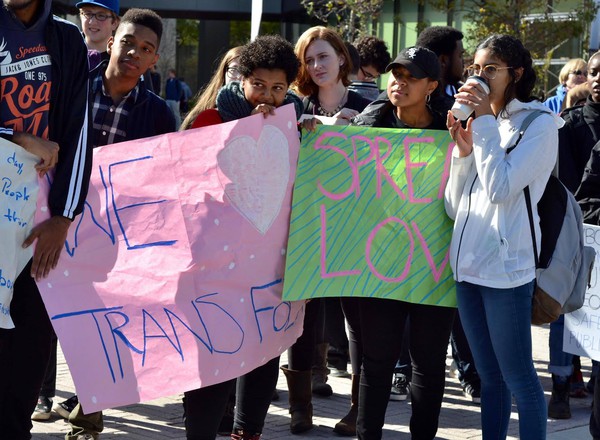 Giovanna DeCastro / The Chicago Maroon
Second-year JT Johnson, one of the UChicago students who organized the counterprotest, expressed concerns about the RCP’s motives. “I don’t have anything against the Revolutionary Communist Party, but I think they came for their own purposes. Their goal was separate from mine, and it seemed like they were trying to take it over, although they disagree,” Johnson said over e-mail after the protest. “I appreciated them allowing people to use their mic, but I wish they had used it less or said different things.”

Speakers on the megaphone expressed their opposition to the Church and its ideas and voiced messages of support for transgender individuals. Sunsara Taylor, a member of the RCP, spoke about the broader influence of the Church’s beliefs in America. Explaining the RCP’s presence, Taylor said, “They [the Church] really do concentrate a long tradition in this country of bigotry and hatred against anybody who defies their literal, fascist interpretation of the Bible.”

A student at the Lutheran School of Theology at Chicago voiced support for the counterprotest and reminded attendees that the Westboro Baptist Church’s beliefs are strongly opposed by many religious groups. Several UChicago students spoke about their own reasons for participating in the counterdemonstration.

At one point, Johnson took the microphone and reminded those present about the purpose of the event. “It’s important for all the trans people out there to know that even though there are idiots like those across the street, we outnumber them by so many.” 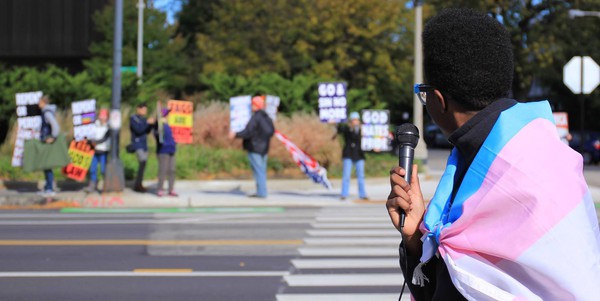 A counterprotester on the South side of 55th Street speaks into a microphone provided by the Revolutionary Communist Party.

Feng Ye / The Chicago Maroon
For the most part, the Church picketers and counterprotesters did not interact. At one point, a picketer holding several signs and an American flag he left trailing on the ground began shouting in the direction of the counterprotesters, but he was drowned out by shouts of “What?” and “We can’t hear you.”

Just before noon, the Church picketers climbed into a van and moved to the intersection of Midway Plaisance and Woodlawn Avenue. After walking to the new location, the counterprotesters formed a barrier around the Church picketers, facing outward onto the street in order to obstruct visibility of the picketers. At 12:23 p.m., about ten minutes before their schedule, the Church members loaded their signs into a car that pulled up next to them and drove off as counterprotesters waved them goodbye. 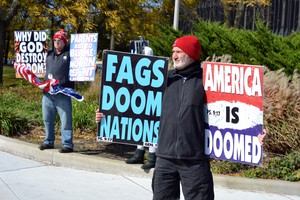 A Westboro Church picketer holds signs reading "Fags Doom Nations" and "America is Doomed" on the North side of 55th Street.

Giovanna DeCastro / The Chicago Maroon
“I’ve never seen a ‘Christian’…group so hateful before, and I just wanted to see what they’re all about,” Columbia College Chicago student Jaye Rodriguez said. Rodriguez came with several classmates to participate in the counterprotest.

The Church’s visit to campus came as part of a protest tour of perceived transgender-friendly institutions across the country. The Church’s official announcement for the picket cites the University’s gender-neutral housing and bathrooms, and accuses Law School faculty of promoting LGBTQ+ oriented policy changes on a national level. 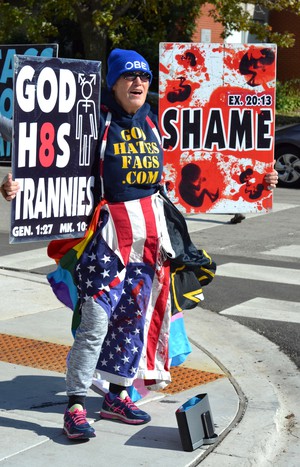 Giovanna DeCastro / The Chicago Maroon
The counterprotest was not the only response to the Church’s visit. Brent House, the home of UChicago’s Episcopal Campus Ministry, held a safe space with tea and snacks. The event was inspired by an event in 2010 when the Church came to protest outside Hillel. Campus groups cooperated to hold a pizza party at what is now the Center for Identity and Inclusion, asking students in the area to ignore the picketers. After standing for several minutes without receiving any attention or opposition, the Church picketers abandoned their protest.

The Church also protested the University in 2009 over its employment of Barack Obama, and  was met with counterprotests and parties. Members of the Alpha Delta Phi fraternity, whose house was near the site of the protest, danced to songs including Diana Ross’s “I’m Coming Out” in bathrobes and without shirts. Students also organized a party in Hutchinson Courtyard to celebrate diversity and raise money for an LGBTQ+ oriented charity. 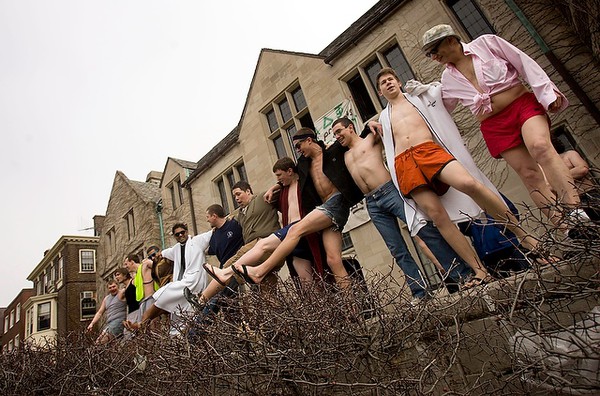 Alpha Delt Brothers held a counter-protest against Westboro in 2009.

Misgivings aside, Johnson considers the event a success overall. “Protests are about visibility. They [the Church] do what they do because they want their hatred to be seen and heard. I can’t stop them from doing that. I can’t end their tour, but I knew if enough people came, we could outdo their hatred with supportive voices.”

The Church did not respond to a request for comment.

Students Torn Over How to Respond to Westboro Protest

There will be a "safe space" for students to ignore the protest.