Top 25 Battle on the Slate for Halloweekend 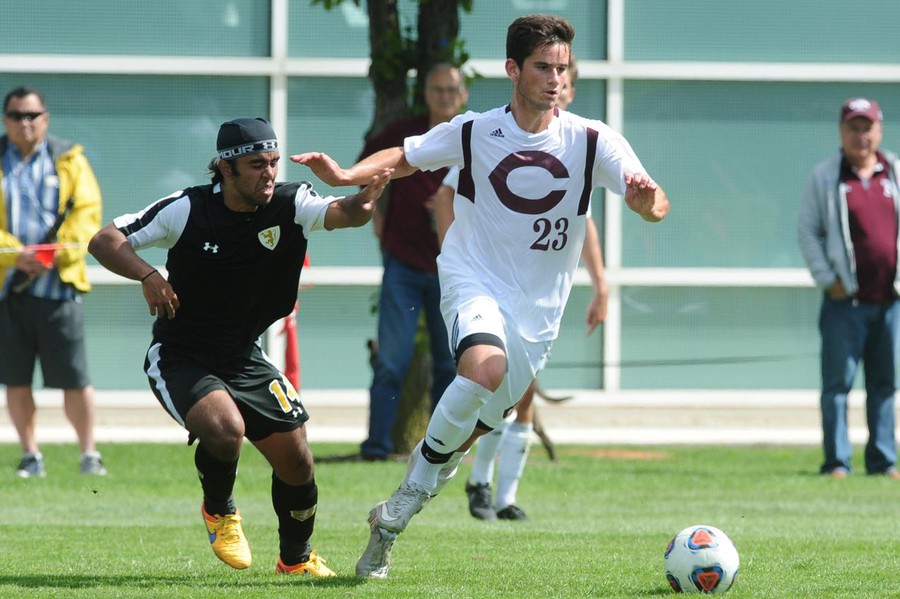 Third-year Andre Abedian runs past chasing defender and moves the ball up the field.

This weekend the 15–0 men’s soccer team will head east to take on Case Western Reserve and Carnegie Mellon. The No. 1 Maroons are looking to continue their fantastic season and extend their winning streak against the 5–7–3 Spartans and the 10–2–2 No. 19 Tartans.

Chicago is coming off of last weekend’s 3–0 senior day victory against Aurora, in which it tied records for both wins and shutouts in a season. Two Maroons, third-year defender Stacey Reimann and fourth-year forward and captain Brenton Desai, were named UAA Athletes of the Week in the wake of this performance. The indomitable UChicago defense has only allowed five goals in 15 games, and it is complemented by an explosive offense that has scored 14 goals in just the last five games. Reimann attributes the Maroons’ success up and down the field to the depth they have at every position. “Across games, no matter the strength of the opponent, we are able to play several different players at a single position. Starters are getting enough rest, while substitutes are getting significant playing time. And as a result, we are healthier, stronger, and more prepared to outwork our opponent.”

The Maroons will look to exercise this depth against Case Western Reserve on Friday. The Spartans have gone into overtime against their last three UAA opponents, resulting in a disappointing two ties and a loss. They are undoubtedly mentally and physically drained but are likely to come out looking for redemption. However, the Spartans’ inability to close out matches and find game-winning goals could prove deadly against a Maroons team that has shown its ability to take a lead and hold onto it, as well as its capacity to come back from a deficit.

A victory on Friday would put the Maroons in a position to clinch the UAA title in their penultimate regular-season game on Sunday. The Tartans have only one victory in UAA play despite dominating performances against regional opponents. Desai is excited about the opportunity that the weekend presents, saying that the team will be “very focused on continuing to play hard and keeping our level as high as it can be. UAA games are always a battle so it's going to be important that we are composed and humble!”

Although Chicago is undefeated and holds the top spot in the country, fourth-year captain DJ Weis also emphasizes the importance of taking nothing for granted. “Our team only ever takes one game at a time. The goal of our team is always to win the next game and improve ourselves in the process. We have two opportunities this weekend to make ourselves better.” Going into the weekend, Weis and the rest of the Maroons are motivated by the belief that “if we come out aware of the game plan and our past mistakes and play our best then there's no opposition we can't beat.”

The Maroons will face Case Western Reserve in Cleveland before travelling to Pittsburgh to face Carnegie Mellon. Kick-offs are scheduled for 6:30 p.m. on Friday and 12 p.m. on Sunday, respectively.