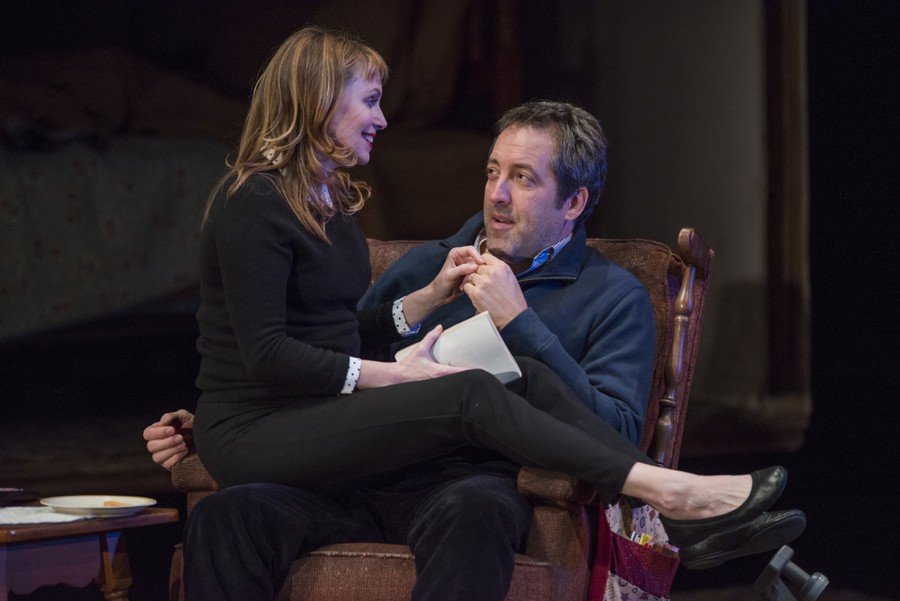 A sick mother; an adult son dutifully home to tend to her--such is the archetypal plotline of Visiting Edna. However the show, currently playing at the Steppenwolf, is anything but typical.  For one thing, it contains some peculiar staging elements. Though the story only has two real characters, there are four actors in the room—the third personifying television, the fourth playing cancer.

Edna (played by Debra Monk) has been recently diagnosed with cancer and is adamant that she feels fine. Her son Andrew (played by Ian Barford) feels compelled to spend more quality time with his mother and is home for a visit.  Set in the 1980s in Edna’s home in Iowa, the two characters try to breach the emphatic politeness of their relationship in order to connect.

Meanwhile, TV (played by Sally Murphy) and cancer (played by Tim Hopper) hover around mother and son like referees in a sports game, always in the room, always just out of the way. The result is effectively claustrophobic, reminding us there are always forces at work behind human interactions. Indeed, these two characters often converse with Andrew and Edna in order to sway their thoughts and actions.

TV constantly distracts Edna and Andrew from their hardships. It repeatedly calls out shows the characters might want to watch and creeps in during awkward conversations. Yet it also works to connect the pair, bringing back memories created in front of the television. Cancer is a predictably dark presence in the room; he encourages Edna and Andrew to face, and perhaps wallow in, their feelings.

The play started with introductions. First onstage was Sally Murphy, who told the audience she will be playing TV, adding that she’s not sure why the playwright put in this role, or what exactly she is supposed to do with it.

These last remarks encompassed my feelings about the two personifications. While the idea is interesting—and certainly novel—their presence did not seem necessary to the unfolding of the play. Pure metaphor, they do not grow throughout the play as “characters.” They served more as a tool for the audience, helping to fill in the characters’ backgrounds and understand their feelings.

Still, Hopper’s performance was haunting. He is cold, calculating, and parasitic, but not purely evil; he, like Edna, just wants to survive. The physical representation of this disease is unusual and slightly discomfiting, as cancer is always a public enemy, never a character. Hopper’s theatrical but even tone evoked the presence of a psychiatrist, and the audience often laughed, not sure if his words were sincere or ironic.

Murphy was bright and charismatic in her role (I overheard many a patron say she was their favorite character),embodying the sexy, energetic artificiality attributed to television in the 1980s.

Though these two characters were perhaps the most striking element of Visiting Edna, they were not the defining element. At intermission the man sitting behind me declared, “the set is irrelevant; you could have done the whole play without it.” This, to me, was a representation of what I thought was missing from Visiting Edna.

The set, Edna’s home, has everything to do with her character. It is the space Edna built, the rooms she decorated with her precious possessions, and a physical reflection of her personality. And yet I agreed with the man behind me—the set was irrelevant.

The characters in Visiting Edna were only types of people. They were excellent representations of an average mother and son. But what is special or unique about Andrew, Edna, and their relationship? Not much.

The issue is not that the play is quotidian; I believe there is immense richness in the mundane pieces of life. It is that Visiting Edna was not the everyday of real people with real particularities, but that of archetypes. The language too was poetic, avoiding natural stumbling in favor of precise and often metaphorical articulation—be it of love, fear, or insecurity.

It seemed at times that even the actors leaned into this—there were moments when it seemed that they were not listening and responding honestly to each other, but instead perfectly executing their roles as mother and son.

If the play sacrificed the personal, it was in pursuit of the universal. The character’s struggles, particularly internal, were ones I recognized, and the production perfectly captured the pain of longing for a meaningful connection with someone you love. I was moved by Visiting Edna, and the inevitable ending of the story (I’m sure you’ve guessed it by now) hit no less hard because of my reservations. There were no unlikely twists or cheap revelations; the play showed life as it often is: beautiful and disappointing.

Visiting Edna runs through November 6 at the Steppenwolf Theater. Tickets are $15 for students.